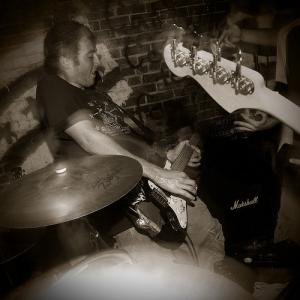 Another week in the books for WPGU’s Make Me A Mixtape, and boy has it been a treat to have these local musicians come into the studio to share some of their experiences with us. This week’s show featured member of punk band The Fresh Kills, Ryan McCoy.

The Clash: “This Is Radio Clash”

McCoy said wrote a letter to openingbands.com back when it was in its hayday in Champaign-Urbana about not being able to get into an Alkaline Trio show when they played at the Illini Union’s Courtyard Cafe back when he was 13. He said it was a pretty devistating experience, but the band was influential to him nonetheless.

Latterman: “He’s a Good Sposato (I Love Ya Blue Blue)”

He talked about Latterman when they were on Jade Tree records and how the DIY ethic took a role in his band today. House shows are an important part of the local music scene, and its great to have the resurgence of DIY to help bands book shows around town.

Slapstick: “There’s A Metal Head In The Parking Lot”

McCoy talked about how Against Me! played at the Red Herring in Urbana right after they put out their record Reinventing Axel Rose. Although he didn’t get to see the show, his friend suggested listening to the band more. The first time he heard about the band was after he read in a magazine which gave the group a not-so-positive review. It was only a few years later when the band began to recieve rave reviews for their records. He just recently saw them play in Bloomington with a band later on his list, Cheap Girls.

“In high school I was interested in exposing myself to as many bands as I could. I listened to a lot of ska in high school, so I immediately fell in love with that. But before that of course there were bands that I listened to like The Clash, then a lot of bands on Asian Man Records. From there I was more into post-hardcore stuff and new wave of emo that was rising up. Some of the music I listened to back in high school I’m not very proud of, but still the majority of the things I listened to I am proud of.”

Cheap Girls opened for Against Me! when McCoy got the chance to see them in Bloomington recently. He believes they’re “going to be the next big thing.” He stumbled upon them through internet blogs and such. The group is on Quote Unquote Records, a donation based label and their music is available for free on their website.

The Ramones: “I Wanna Be Your Boyfriend”

“Sappy great lyrics. One of their all time bests.”

The Fresh Kills are playing their next show on St. Patrick’s Day (this Thursday) at Red Star, then at Exile on Main Street for Record Store Day, as well as Mike ‘n Molly’s that night. He said to expect new songs from the band then. Check out The Fresh Kills bandcamp, where you can get their record Turn Up The Brilliance free of charge. Tune in next week where we feature Mark Wyman of Take Care.