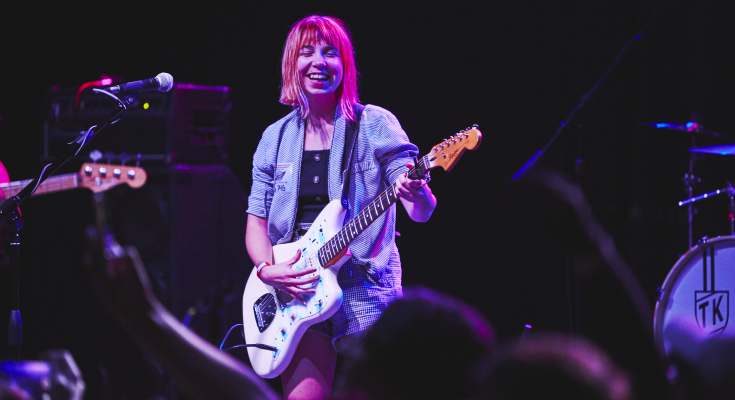 Thursday marked the opening night of this year’s Pygmalion Festival and I was lucky enough to see Mermaid Heaven, Beach Bunny and Japanese Breakfast all at the Canopy Club. All three acts put on crowd-pleasing sets that made overall concert one of my favorites.

Mermaid Heaven kicked off the night with their electro-pop sound. The Champaign-based band is no stranger to Canopy Club, having played with zzo late last year. After Mermaid Heaven was my most anticipated act of the night-Beach Bunny. Anyone who knows me knows that I love Beach Bunny, an indie, female-led band from Chicago. Originally a solo act started by Lili Trifilio, the band eventually grew to include Matt Henkels and Jonathon Alvarado. Despite the actual concert venue location of the show, it felt like a house show in terms of familiarity. I recognized a lot of people I knew and the overall tone of the crowd felt relaxed and friendly. At one point “Happy Birthday” was sung to a girl in the crowd, which only furthered my beliefs of the friendly atmosphere the concert held.

This was my first time seeing Beach Bunny live and I immediately noticed a difference between her live and recorded sound. While I love her recorded music, she brought a new, slightly more rocking, sound to her songs. It was absolutely amazing; I think Beach Bunny has officially stolen the title of my favorite band to see live.

Among the previously released songs, a few new songs were performed. I didn’t catch the names of all of them, however, “April Showers” stood out the most to me with the perfect mixture of soft indie and pop-rock. All of the new songs left me actively waiting for the new album to be released. One thing to hold fans over for now, though, is the new EP that Trifilio self-released on Friday after her performance, Book Club. It’s a quick, 11-minute EP filled with Trifilio’s musings on love and life in Chicago.

One of my highlights of the show was when a mosh pit formed during “Sports.” As someone who is not the typical ~mosher~ I actually enjoyed myself! If you get the opportunity to see Beach Bunny live, I urge you to do so.

Between Beach Bunny and Japanese Breakfast my friends and I took a brief intermission to get pizza (shoutout to Manolo’s, the best pizza in Champaign-Urbana…don’t fight me on this). Japanese Breakfast took the stage and, despite knowing approximately one song, I enjoyed myself a lot. Michelle Zauner, the solo artist that performs under Japanese Breakfast, has such a unique voice that brings a cool vibe to her songs. “Road Head” was an otherworldly experience that I may never get over.

One of my favorite things about the set was when Michelle did a cover of “Dreams” by the Cranberries for a girl and her partner. The best part about it was that the girl was constantly DMing Michelle about doing the cover and yet, throughout all these messages, she never got her or her partner’s name. The song was then dedicated vaguely to the girl and her partner, who hopefully knew who she was.

I was extremely sad to see the night end, as all three sets were filled with so much love, energy, good music and good friends. Mermaid Heaven, Beach Bunny and Japanese Breakfast provided me with a first Pygmalion experience that I’ll always cherish.