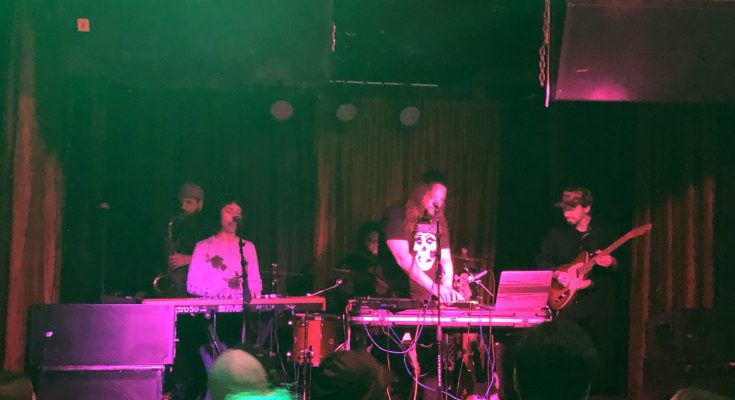 I’d always heard about the loud, energetic venue that was the front room of the Canopy Club, but I never got to experience it until last Thursday, when I was fortunate enough to see Michal Menert and the Pretty Fantastics with the Data Waves. The two bands, with their funky sounds and colorful lighting, put on shows I won’t soon forget.

The Data Waves are a self described “instrumental funk band” based out of Champaign. The five piece band played a variety of their own original compositions and covered some classic jazz pieces as well. Their unique sound, combined with their undeniable onstage chemistry, made for an extremely entertaining opening act. Kevin King, saxophonist, was a standout, cracking jokes between songs and talking back and forth with the audience during a break in the set. The Data Waves are definitely ones to look out for in the local Champaign music scene.

Next up was the main act, Michal Menert and the Pretty Fantastics. From what I’d read and listened to from the band, I knew I was in for a good show. Michal’s music is, and I mean this in a good way, LOUD. Loud in the sense that you don’t just hear the music, you feel the music through your whole body. The group also recently released a new album, the thesis of which is to not take yourself too seriously. The message carried over to their performance, and I think the audience picked up on the vibe too. Nearly everyone was on their feet during the show, dancing and feeling the music.

My favorite piece of the night was “All You Get.” The ensemble’s Bandcamp says the song “is an affirmation to take life (with a grain of salt) and make it yours…a comforting reminder that much of what we prioritize isn’t as valuable as love & purpose.” The song has a repeated chant that really stuck out to me- “Everybody dies but not everyone lives.” This is, in short, the overall tone of the night- have fun, live, and don’t care what others may think or say. Combined with the pumping bass and the dancing crowd around me, I really enjoyed listening to the piece live, even more so than when I heard it online before the show.

Overall, Michal Menert’s music has something for everyone; even if electro-jazz and hip-hop aren’t a preferred genre, the group’s shows, with excellent chemistry onstage and interesting lighting effects, make it universally acceptable to dance and sing along.