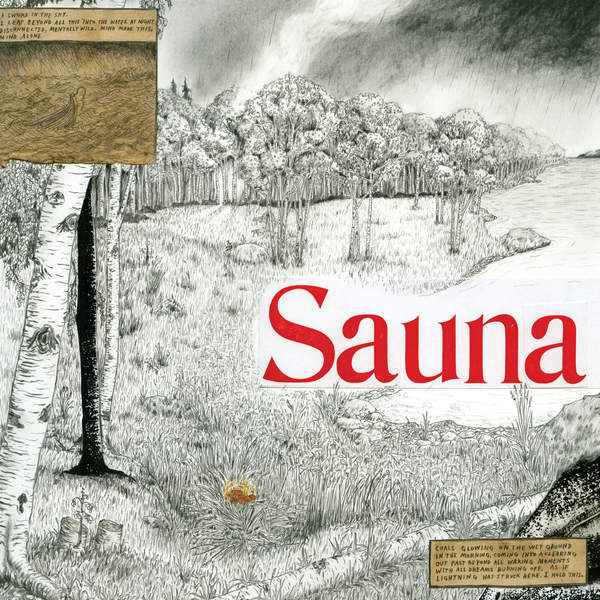 Whether making music as The Microphones or Mount Eerie, Phil Elverum has remained very consistent in two aspects: poetry that confronts the biggest questions of the human condition wrapped in an aesthetic that sounds like nature in musical form. The amount of mileage he has gotten out of these ideas is staggering, though the inventiveness of his songwriting and constant genre hopping have kept listeners constantly wanting more for over 20 years. Whether it be the black metal/folk fusion of Wind’s Poem or the stripped down acoustic aesthetic of Dawn, Phil knows how to experiment in the studio to achieve sounds unlike anything else. Sauna is no different. Taking the drone elements from 2012’s Ocean Roar to the extreme, Mount Eerie has crafted a sparse album filled with dense music that, while more consistent than his past work, never quite reaches the heights of his best material.

The most immediately striking thing about Sauna is how well it sonically imitates its namesake. The title track opens the album with four and a half minutes of warmly droning organs and shimmering cymbals which set the tone of the rest of the album. It’s instantly clear that you’re going to need a bit of patience to get through the album, which spends a great deal of time wallowing in ambiance. Also, as is the case with most of Elverum’s work, headphones are an absolute necessity. Phil has always been an excellent sound engineer and the constant drone present on Sauna sounds almost like it was specifically designed to showcase his abilities. While there are drone elements on most of the tracks here, they are featured most prominently on the longest tracks: “Sauna” and “Spring”. Both sound meticulously crafted, dense with subtle changes in sound and are quite beautiful and captivating despite the sparse arrangements and long run times.

While the drone-centered songs are welcome experiments in sound and songwriting, the more conventional songs often fail to live up to their potential, sounding half-baked and under-developed. “Turmoil” is almost two minutes of laid-back fuzz-pop that sounds great but doesn’t really go anywhere. “Books” begins as a surprising and pleasant homage to The Books, complete with plucked strings and other similarly twee sounding instruments, before a jarring shift to another song which also goes nowhere.

That’s not to say that the more traditional songs are all bad. “Boat” treads familiar territory for Mount Eerie, sonic chaos driven by a pleasant vocal melody placed low in the mix. The way it explodes after the Steve Reich-esque vibraphone interlude, “(Something)”, is very reminiscent of the beginning of the classic Microphones song, “The Glow, Pt. 2”, which is always a good thing. After crashing, screeching and exploding for the entirety of its runtime, “Boat” comes careening into album highlight “Planets” with a burst of squalling guitar feedback. “Planets” captures much of what makes a great Mount Eerie song. The juxtaposition between the thundering drums and the soft vocals, the catchy hook and wide-eyed, poetic lyrics are all classic Elverum motifs. I only wish the song was longer.

While, lyrically, Phil has seemed obsessed with death and existence on past albums, on Sauna he seems more fascinated by the concept of human consciousness, specifically by how we experience the external world. Allusions to steam and veils are scattered throughout the album, appearing to question the infallibility of our perception of the world. Elverum even goes so far as to question the existence of both himself and the world several times on the album. Sauna is certainly not the album to turn to while deep in an existential crisis. To Phil, the world vanishes with the blink of an eye, perception is an illusion and dreams are interchangeable with life. The lyrics on Sauna confront big question marks in our lives, an often daunting task, but Elverum gives simple answers with a comforting shrug that basically amounts to “don’t worry”. To him, life has always been a dream and death is just a painless return to nothingness.

Although Sauna is hindered some by under-developed songs, the strength of the songwriting and over-arching themes make it worth several listens. The music is dense and often packed with novel ideas and the lyrics are insightful and thought provoking. Sauna is an extremely solid record and if it really is the last Mount Eerie album for a while like Phil says it will be, then this is an excellent way to go out.