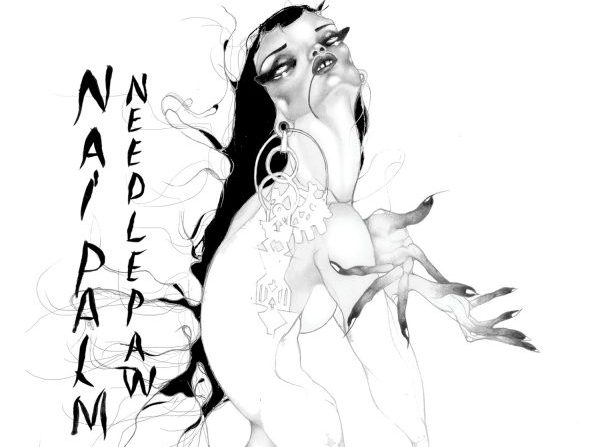 Coming across an artist of vocal ability such as Nai Palm is few and far between. With a naturally soulful, R&B born voice, Nai Palm takes leaps into an artistic roller coaster ride in her first solo album “Needle Paw.” Abandoning her past musical experiences with her band Hiatus Kaiyote, Nai Palm adventures into a hauntingly acoustic version of herself, both past and future. “Needle Paw” is a soulful journey focused on the power of a naturally impressive voice. Much like her work with Hiatus Kaiyote, Nai Palm covers many past songs, but gives each intimate attention. It is no doubt that from one listen alone, a newcomer to the kingdom of Nai Palm’s talent will not be left feeling disappointed at the close of the hour-long album.

Beginning on an awkward step to such a strong jog of an album, “Wititj (Lightning Snake) Pt. 1” gives no precursor to its attached album besides the fact that the album itself is an oddity. While in a sense artistic and impressive in ways only a listener can judge, “Wititj” is an ill-fitting puzzle piece to such an impressive collection of vocal talent. This could be the only awkward pitfall of “Needle Paw,” because after the listener moves on, Nai Palm covers her own Hiatus Kaiyote song “Atari.” What was once an electronic R&B song with a thick base of musicality, Nai Palm brings on an acoustic solo take. Taking this song and shaving it down to the basics gives Nai Palm the power to advertise her vocal talent, much like the rest of the album does. This is no disappointment.

The acoustic take on many covers of past songs can be seen as a shortcut to the making of an album for Nai Palm. Why not create new content instead of daring to repeat past endeavors? By no means are covered songs on this album a mistake, but maybe they lie in categories of “been there, done that.” Fans of Nai Palm and Hiatus Kaiyote know and appreciate the vocal talent so effortlessly given, therefore there is a need for new content to highlight it so. Covers of past songs include “Atari,” “Haiku” and “Molasses.” These repeats offer interesting vocalizations that were not once offered from Hiatus Kaiyote, simply because of how Hiatus Kaiyote arranged themselves. Not outwardly necessary for the big picture of the album, the covers themselves are enjoyable, but sadly “skippable” if they are not intimately focused upon. Moving on to new content, Nai Palm takes what a listener wants and maximizes their experience. Some highlights from the album include “Have You Been” with its small tidbits of artistry and “Atoll” which is like a small musical bump in the road. Starting slow and quiet, Nai Palm knows how to captivate a listener in her piano voicing. The song goes on to build up tension, only to slowly let it go in a soft decrescendo including Nai Palm singing alongside a meek child’s choir. This is not something a listener would expect from “Needle Paw” but the theme of “expect the unexpected” seems to be poking itself through the seemingly musical cracks of the album.

“Wititj (Lightning Snake) Pt. 2” is the bookend this album does not fit into, but rather is forced into based on its opener (“Wititj (Lightning Snake) Pt. 1”). Beginning and ending such a creatively intense and hypnotizing album with such awkward jumps and landings from both songs can leave an impression on a listener that doesn’t feel right. Presenting the awkward pitfalls as the beginning and ending of such an album is not an expected take, but it is still fitting for Nai Palm as an artist.

As an advice to listeners who visit “Needle Paw:” do not focus attention on lyrics of songs. All meaning and importance of the album is sieved and the album sits thin and blank in your mind. Focus on the vocal talent Nai Palm advertises in each song, whether it is new or old. Another piece of advice is to expect the unexpected. Based on the personal aesthetic and past ideas of Nai Palm as a performer and as the former front-woman of Hiatus Kaiyote, no musical tool is too odd to include. Enjoy “Needle Paw” for what it is, a wild ride of raw talent that can be played once and appreciated, or ingrained into a listener’s mind. “Needle Paw” has its unusually fitted pieces, but that’s what makes it its own album, showcasing musicality in a transparent form, iced over with an impressive R&B voice.

Must Listens: Atoll, Have You Ever Been (To Electric Ladyland), and Crossfire / So Into You