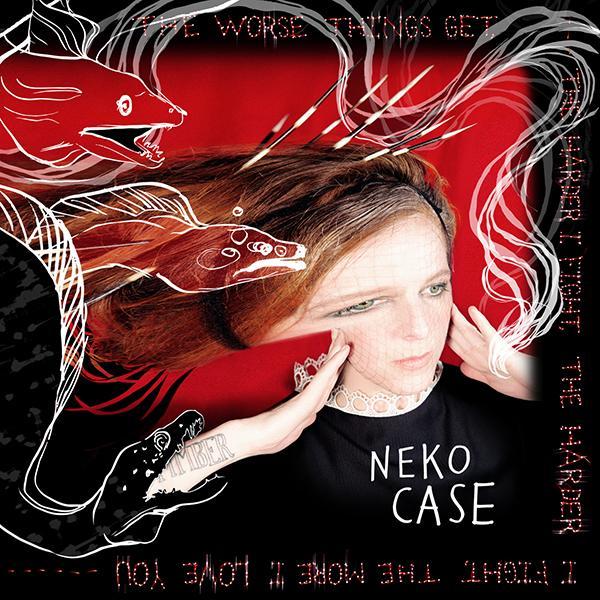 Neko Case, America’s beloved singer-songwriter and musical collaborator, is back with The Worse Things Get, The Harder I Fight, The Harder I Fight, the More I Love You, which is her first solo record since 2009’s Middle Cyclone. With this album, Case plays to her songwriting strengths. She is not afraid to incorporate different instruments beyond the staple guitar, piano, bass, etc.

Nor does she ever become overindulgent in instrumental experimentation. While Case’s album has a lineup of impressively and respectably orchestrated songs, she does not overemphasize any kooky or quirky musical tendencies. Rather, she uses the album to explore relationships and human behavior through both her lyrics and the tone of each song. Case has a reputation as an outspoken advocate of animal rights, a reputation which largely came to being following Middle Cyclone’s release, when she drew attention to the cruelty of keeping animals in constricted zoos on the song “People Got a Lotta Nerve.”

While this album seems more concerned with exploring and revealing human relationships, nature seems to have almost as much of an influence on the sounds and imagery as in her previous albums. Case so masterfully weaves references to plants and animals into her songs that sometimes they do not appear without being paid a keen sense of attention. Case occasionally uses natural sounds in the background. Some of her previous albums contain tracks on which bird chirps are audible. Her recordings also often sound as if they have been recorded in bigger, open rooms rather than in a small studio. The space allowed in these recordings brings forward a sense of airiness, which inherently connects her music to nature.

Another strategy that Case borrows from previous endeavors is that she intertwines fast-paced and slow-paced songs. When she pushes the music forward, the album carries momentum that feels unstoppable. For example, “Man” brings forth the first real burst of energy on the album, and it evokes a sense of blood-rushing movement.

When she decides to slow down, though, she really makes the most of the moment. Instead of using calm songs to even out the fast ones, Case’s slower tracks reveal a desire to get to the heart of an earnest and tender moment. For example, one of the most stripped-down songs on the album is “Nearly Midnight, Honolulu,” which occurs a little less than half-way through. During the song, Case touches on the sensitive subject of mother-daughter relationships with both sadness and compassion. She carefully sings, “They won’t believe you when you say ‘My mother, she did not love me,’” establishing a heartbreaking tone. Case’s willingness to delve into sad subjects is one of her strengths because it provides a dynamic quality to the album. She does not obsess over the more depressing sides of life, but she is honest enough to admit that they exist. She is also unafraid to change the pace of the album from heartbreaking and slow to excited, and she knows how to change speed without leaving the listener feeling motion-sick.

Overall, The Worse Things Get, The Harder I Fight, The Harder I Fight, The More I Love You is a nice addition to Neko Case’s catalogue of music. She sticks to the things that have made her past albums effective without seeming like she is beating her style to death. Her lyrics come across as sincere and strong, and she offers just enough variety to keep the music interesting, but also enough familiarity to make the album something comfortable to listen to.

RIYL: The New Pornographers, The Sadies, The Avett Brothers