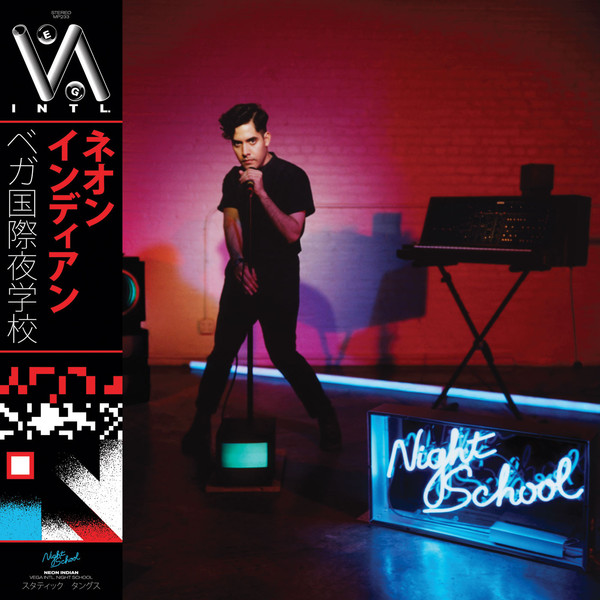 I think Neon Indian took a long enough hiatus since Era Extreña in 2011, and I have been eagerly awaiting the arrival of Vega Intl. Night School since he released “Annie,” which seriously blew me away. It had much more structure than Neon Indian, or lead man Alan Palomo’s previous tracks and I thought it was a great precursor for this entire album now that I have finally had the pleasure of listening to the whole thing. So get ready folks because you’re about to groove to the chillwave sensation, Neon Indian, with what I think is their best creation yet.

The album opens up with an intro track that sounds like something being played backwards and leaves you hanging on the edge of your seat as if it’s about to drop something insane. While it plays a track backwards, they play a great beat and put a melody into it, and then it fluidly bleeds into one of the main tracks “Annie.” With its reggae-inspired sounds, this song has been a favorite of mine since it was released this past summer.

The rest of the album really follows in suit with “Street Level” and it’s dripping sound, but what I’m most pleased with is the feature of Palomo’s vocals being much more present already, compared to his previous albums. It was more of a background track, but now it’s stepping into the limelight and is bringing a lot of these songs together to complete the sound. That being said, Palomo does not skimp on his electronic music skills, with plenty of great non-vocal solos.

The next featured track that was previously released, “The Glitzy Hive,” gives us a huge 80’s club vibe, which Neon Indian has been previously criticized for since the band leans a lot on the underground club sound. However, it makes a more solidified sound that they’re able to change but still be consistent as an artist in the music industry. Palomo still maintains the 80’s inspiration, as well as this sort of grainy synth sound that he’s known for. Sometimes it feels as if songs like “Dear Scorpio Magazine” have too much going on and get a little busy for the ears. But every time you’re about to complain about it, he brings it back to a more cohesive sound.

Neon Indian’s comeback was more than pleasing, it was a blast back to “1992 in some club in Italy” as Palomo described it, and that is certainly what the listener is going to get. If you’re not into that club beat, I don’t recommend this album because it is certainly persistent throughout the whole album. But if you can dig it, you will certainly jam to this work.

Check out “The Glitzy Hive”: