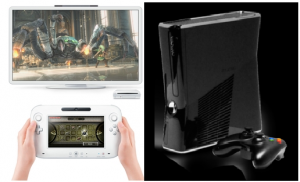 This week in Nerdy News I wanna talk about the future.

This past E3 conference, Nintendo announced its next step in video game entertainment with the Wii U. Nintendo showed off it’s ability to compete with Microsoft and Sony with incredible graphics, and once again on the leading edge of innovation with its new controller design. These new controllers are set to include an interactive screen and possibly act as a its own portable gaming device. According to an investor’s meeting, this next system for the Japanese video game mogul will ideally be set for release in the second half of 2012 after displaying the completed version at E3 2012.

On the other hand, some are speculating that Microsoft’s next generation console will be supposedly released in 2013.According to an article on Develop “Multiple sources across the industry, from processor chip manufacturers to middleware firms, have told Develop they expect the console to be fully unveiled at E3 2013, months before its release.” Microsoft itself has yet to make a statement about a new console so I am not sure how much faith I hold until the official release is made by the company.

I do believe it is about time for them to update their hardware though. Xbox was released to North America retailers in November 2001, and after four years Microsoft rolled out its first version of the Xbox 360. Albeit they have been make corrections and updates since then, from fixing the red ring glitch to the latest update to include motion gaming with the Kinect. However the basic hardware has remained the same. Not that I am complaining, but I would not mind seeing what a new processor and video card to hold for Microsoft gaming.

So now the question is what is going on with Sony. For as far as my knowledge goes, there is no real trustworthy information out about a new system from Sony to follow up after Playstation 3. It did come out the latest out of the three, implementing the most new tech. Though with all this pressure about entering a new age of video gaming, will Sony make a change? As their former  mascot the PS3 Marcus would say, where’s your game at?

I'm a guy who has the best job in the world. I love music, playing video games, hanging out and having. WIth WPGU I get to talk about all those things and the get the opportunity to share that with others. Not to mention I get to work with some of the coolest people you can imagine. Seriously, where else would I be? Masood "Monsoon" Haque is best described as kinda tall, somewhat dark, but damn handsome.

View all posts by Masood Haque →