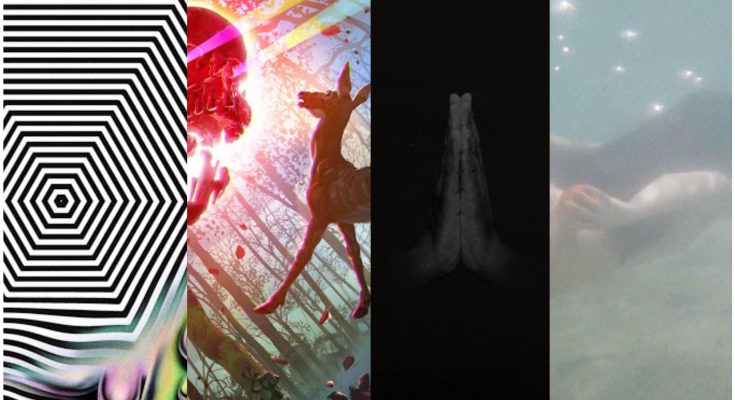 Every single Friday of every single year, there’s great music to discover. In the age of Spotify, infinite content is available at any given moment. It’s astounding but also intimidating. With all of this music readily available all of the time, it’s hard to know where to look for new tunes. This abundance of content makes music discovery overwhelming. So, instead of a huge list of every notable release from 2020, here is but one album from each month. Here are my selections from September to the end of the year. I hope you enjoy what you pick out from here as much as I do!

I don’t blame you if you’ve never heard of Sault. An anonymous R&B collective, Sault have been operating for a little under two years. In 2020, they made some waves with a pair of untitled albums (neatly distinguished as Black Is and Rise) that perfectly represent and embody the racial tensions and BLM movements of the year.

With their moving and timely commentary, infectious grooves, and a little help from Michael Kiwanuka on Black Is, Sault caught the eye of critics, and rightfully landed on many publications’ best-of-2020 lists. The musical project has since been traced back to R&B artist Cleo Sol and producer Inflo, but it’s assumed there are more members still unknown.

The elusivity and anonymity of the group is essential to their ethos, and a part of their appeal. Sault creates deeply human music, detached from the egos of star musicians. Frequently, they interpolate powerful speeches and include anecdotes from several different speakers, painting a vivid and broad picture of the current living landscape for Black people.
Rise draws lots of inspiration from classic funk and soul music, and the jams throughout the album are infectious and beautiful. No song however, is more touching than the sweet, wistful, heart-breaking closer, “Little Boy.” Stripped back to a longing piano melody, a groovy bassline, and a punchy drum beat, the lyrics speak best for themselves: “Little boy, little boy when you get older/ You can ask me all the questions/ And I’ll tell you the truth about the boys in blue.”

Song to hear: “I Don’t Love Me Anymore”

Legendary electronic producer Daniel Lopatin’s latest album, Magic Oneohtrix Point Never, is named after his musical project’s original moniker. Fittingly, it sounds like a recap and assessment of the musical ground he’s traversed up until now. For a longtime fan, it’s not the most exciting work he’s put out to date, but for new listeners, it’s a great place to start to get wrapped into his extensive and impressive discography.

Having scored the movie Uncut Gems, Lopatin has been spending time lately with the man behind The Weeknd: Abel Tesfaye, and he is credited as an executive producer on the album. According to Lopatin, Tesfaye’s fingerprints are all over the record. Despite The Weeknd’s iconic voice gracing the album centerpiece “No Nightmares,” it’s kind of hard to tell. That Tesfaye is listed as an executive producer is a bit of a red herring, as this record sounds entirely like a Oneohtrix Point Never one.

Not that that’s a bad thing however. Lopatin’s signature style is undeniably unique, and a generous serving of new music is much welcomed. Featuring countless distorted organic instruments and heaps of gritty, layered synths, Lopatin continues to blur the lines between natural and digital to the point where it’s difficult to describe any one song on the album.
Loosely tied together by a theme of a radio station, Magic Oneohtrix Point Never sounds like a radio station of the future, but with radioactive decay biting at the heart of the music. It has a distinct human warmth, but also contains that feeling of uneasy other-worldness that seeps into Lopatin’s best work. It’s off the wall but very alluring.

Song to hear: “Dog at the Door”

Spirit World Field Guide, the latest project from the underground rap mainstay Aesop Rock, is one of his most ambitious projects yet. Taking Aesop’s penchant for rapping about strange creatures to new heights, Spirit World Field Guide is literal in name– it is a concept album about a spirit world featuring bizarre supernatural animals on nearly every song.

Clocking in at a whopping hour and three minutes across twenty-one tracks, Spirit World Field Guide is dense, but avoids crumbling under its own weight by maintaining a sense of fun and discovery. The beats throughout the album are engaging, but never threaten to drown out Aesop, and they serve as perfect backdrops for him to spit his trademark heady bars.

In the amusing introduction, Aesop announces that “no two spirit world experiences are the same” and that accordingly, as the listener, you should “cover all sections to increase your general understanding of what can be expected.” Applying such focus and seriousness to the entire album would be tiring, but thankfully, the concept going forward is loosely applied. Aesop uses this theme as a base to rap about many topics, including his real travels to foreign countries as well as aging.

Throughout the album, Aesop’s emotions vary. At times, he’s fascinated and awe-inspired. At others, overwhelmed and tired. But he marvels throughout it all, and there’s something very exciting about hearing a rapper this late in his career center an album around the great unknown and how much more there is to learn.

Japanese folk musician Ichiko Aoba’s intricate and beautiful guitar-playing has drawn legions of fans and has elevated her music to cult classic status for years. On her latest album, Windswept Adan, Aoba doesn’t quite ditch the guitar– it’s still the centerpiece of many songs here– but she expands her sound greatly, including flutes, music boxes, and a myriad of strings. Compared to her earlier sparse work, Windswept Adan sounds incredibly lush, all the while still capturing the mystical, naturistic appeal of her work.

With Windswept Adan, Aoba sought to create a soundtrack to an imaginary film about a tribe of inbreds on a remote fictional island south of Japan. Within this tribe, a young girl sets off under her grandmother’s wishes to preserve the family bloodline and to avoid intermarriage. The island she arrives at is Adan, where the inhabitants speak no language and communicate with shells. Accordingly, many songs throughout the album contain few lyrics and plenty of humming.

Wonderfully, the music itself is as charming as the story it’s inspired by. Endlessly pretty and incredibly intimate, Windswept Adan invites you to imagine your own version of the gorgeous remote island of the tale. And while it’s unbearably cliche to complain about the year of our lord 2020, Adan sounds like a spectacular place to be amidst the mess of our current world, and Ichiko Aoba offers that perfect form of escapism with this album. If you’re ever feeling the weight of the world and need a disconnect, I urge you to give this a try.