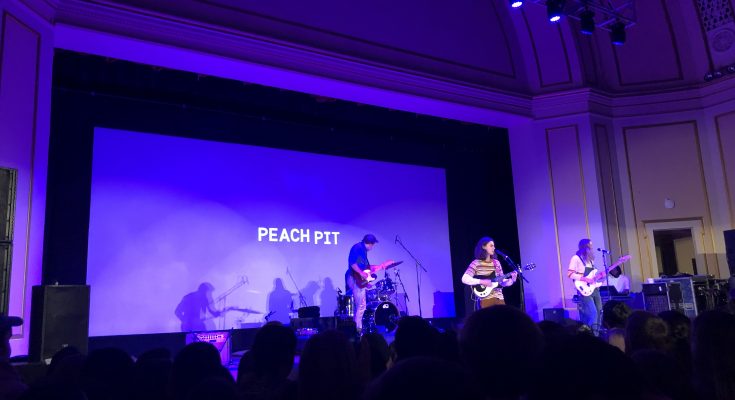 This past Saturday, Star Course brought Peach Pit and Ex Okays to Foellinger. This was
my first time seeing a show at this lecture-hall-turned-concert-venue and despite some
technical difficulties during the opening and main acts, it was an excellent show overall.

Ex Okays started out the night, bringing their garage-rock sound to the auditorium. The young band is active in the DIY music scene in Chicago, and their sound certainly echoes this fact. Ex Okays embody a new wave of alt-rock that many young bands across the country are embracing, as well—these bands are reviving and revamping the sound of grungy garage-rock, mixing it with undertones of modern alternative and psychedelia, and topping it off with inspiration from the popular music of the decades before them. The result is a new sound that feels familiar, yet tweaked in a progressive way. This is my second time seeing the Ex Okays perform, and I am consistently blown away by the talent and artistry that this band possesses.

Everyone in Foellinger was on their feet, fully focused on the performance. Promptly after Ex Okays, Peach Pit took the stage. Right away it became clear that the band has a cult following, with several audience members yelling inside jokes and band members’ names in hopes that the members would smile in their direction. They did, by the way. Peach Pit was very interactive with the audience throughout the show, telling anecdotes that backed songs, asking about the makeup of the audience (specifically, were there any dads out there?), and trying their best to acknowledge their fans when they yelled at them from the audience. There was a certain warmth about them that was friendly and familiar.

The band started out with their most recently-released single, “Feelin’ Low (F*ckboy Blues).” The technical difficulties of the venue became apparent here, as lead singer Neil Smith’s mic was not initially working, leading to a rather anticlimactic start. Once this got straightened out, however, the show took off. The band played some songs that fans are well-acquainted with, then switched over to a new, unreleased song off of their upcoming album. The audience responded enthusiastically to this new song, and it got everyone excited for the new album.

Early on in the set, Peach Pit played their self-titled hit “Peach Pit,” which surprised a lot of people as they were expecting this for the encore. It was a welcome surprise, however. Smith dedicated the song to his grandmother, who had recently passed away but was extremely supportive of the band. This was a sweet moment for everyone in the crowd—even if you don’t know Peach Pit, you likely know their hit song. The audience swayed and smiled fondly at the familiar tune and the sentimental moment. It was certainly a highlight of the night.

Another thing that I loved about the concert was their choice of cover tunes. They played a series of oldies, including “Here Comes Your Man” by Pixies, “American Girl” by Tom Petty and the Heartbreakers, and “Johnny B. Goode” by Chuck Berry. This was a refreshing choice in covers, as most alternative bands that I have seen live tend to cover the same few songs over and over again (I swear if I see one more band cover “When You Were Young” by The Killers, I’m gonna lose it). The crowd seemed to respect this choice, too. I loved watching Peach Pit perform—it was one of my favorite live shows that I’ve attended. I loved the camaraderie between the band members and the sheer talent that they all possessed. Between Neil Smith’s soothing voice and Christopher Vanderkooy’s unbelievable abilities on lead guitar, their music was truly amplified when performed live. There is one specific guitar solo at the end of “Private Presley” that I was certain was heavily produced on the album due to its complexity, but watching Vanderkooy execute the solo perfectly sans production during the live show was all the proof I needed that this band really is that talented. I’m already looking forward to my next opportunity to see them; they really are a must-see act for any music lover.