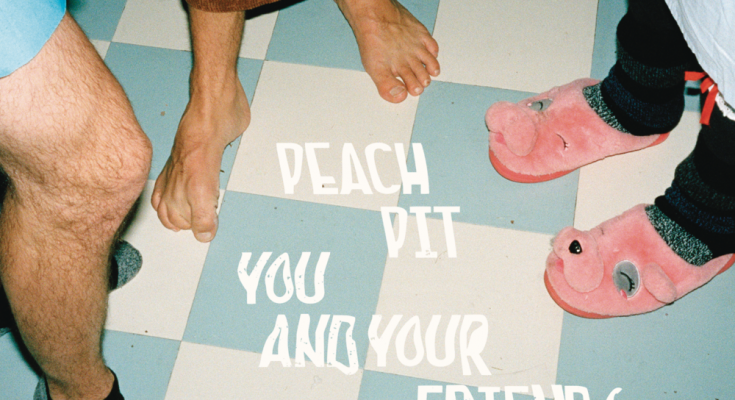 In the midst of a pandemic, the world has been blessed with Peach Pit’s sophomore album, You and Your Friends. At least we have that to be grateful for. At a time where all we can really do is lean into music, the Vancouver-based band’s latest release is actually oddly on-point for a lot of the feelings this isolated world is going through at the moment. At times mopey, at times hopeful, I think it is a pretty fitting soundtrack to accompany you through these weird times. It isn’t a perfect album, but it is a thoroughly enjoying listen from start to finish.

The album opens with “Feelin’ Low” and “Black Licorice,” both of which are what I would define as upbeat sad songs. I especially love “Feelin’ Low” for its constant changes in tempo—at times the drumline and guitar riffs are a bit heavier than what Peach Pit is known for. The instruments juxtaposed with Neil Smith’s calming voice creates an interesting and unique track for the band. The next song, “Black Licorice,” has an especially catchy riff that repeats throughout the song. Lead guitarist Chris Vanderkooy never fails to nail it throughout the album, this riff being one of my favorites. Generally speaking, his part on lead guitar is absolutely essential to the success of the band. In my opinion, this feature sets Peach Pit apart from a lot of bands of similar caliber. When they perform live, Vanderkooy’s charismatic performance often steals the show. Similarly, we see that a lot on “You and Your Friends.” Even when lyrics are lacking, you can count on that lead guitar to pick up the slack.

Another standout song is track 5, “Brian’s Movie.” This tune feels like the soundtrack to a relaxing summer day. It has me craving a day at the beach (or is the feeling of quarantine making me crave that? Regardless, that is what comes to mind). I especially love the drowsy sounds of the guitar behind the lead vocals. Ironically, the next track is called “Camilla, I’m at Home”—a title that definitely aged well given our present circumstances. Even with its relevant title, I think that this track falls a bit short compared to the others. It’s a bit dull with very few ear-catching components.

This leads me to one of my favorite tracks of the album, “Second Life with Emily.” The entire sound of this song is very similar to songs on their previous album and EP. Peach Pit is at their best when they do what they’re known for—engaging, playful guitar riffs and thoughtful lyrics sung in Smith’s naturally-gentle voice. That is why “Second Life” works so well, and it is also why their ninth track, “Shampoo Bottles,” stands out above the rest. The quirkiness of the lyrics in “Shampoo Bottles” combined with the relatively sad content of the lyrics and Vanderkooy’s always-excellent contribution on guitar creates a perfectly Peach-Pit-esque song. By definition it is a breakup song, but it’s an interesting angle. Smith complains about all the stuff his ex-girlfriend left in his apartment, and although he seems pretty annoyed by it, he’s holding onto it because he cannot accept that it is over. It’s definitely one of those songs where the lyrics take precedence.

Overall, “You and Your Friends” is a successful Peach Pit album. Their identity as a band is still abundantly present, seen in their ability to make fun songs about sad things. Certain areas of this album drag a bit, but the standouts are excellent enough to leave me with a favorable impression of “You and Your Friends.” If you’re already a Peach Pit fan, it will not disappoint. With that being said, if you’re just thinking about getting into the band, their debut album “Being So Normal” is probably a better starting point.