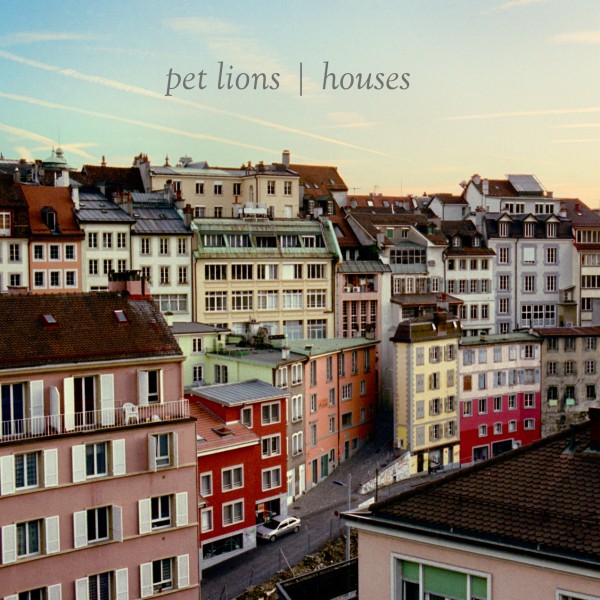 Chicago-based band Pet Lions’ debut album, Houses, at first struck me as slightly underwhelming, but by the end of the album I was sold on this indie pop-rock band’s genuine and thoughtful sound.

For some listeners (this category includes yours truly) a track can make a rocking effort to engage yet somehow end in a tangential music break, losing the listener. I understand layering is a wonderful tool in composition, but one loud noise on top of another on top of another can lose its purpose. Pet Lions went for it with their noisy layering, and I believe in the end it paid off. The first track on Houses, “The English Room,” exemplified this technique by beginning with warm vocals and a guitar and then building in louder sounds. The simplicity left the listener to focus on the lyrics, which were full of heartache and nostalgia without being whiny.

Pet Lions had an interesting turnover with each track. They push through what feels like several eighties influenced songs within their album. “Slow Wave” shadows the sound of Tears for Fears (think Donnie Darko, spiraling camera work), while another consistent effect woven throughout Houses is a surf-y pop sound as a result of the band’s predominant use of a fuzzy electric guitar.

At first I heard this mix of sounds as somewhat schizophrenic, but again, by the end of the album I changed my mind. I realized Houses inspires an almost timeless, hopeful feeling. There were so many moments while listening to the album where I felt already acquainted with the music. There were a lot of “sounds like…” moments, but by no means am I saying Pet Lions lack their own sound or style. Right when I thought what I was listening to was familiar, they would take it in their own unique direction.

Even though this is their first full length album, Pet Lions has had songs featured on several television shows now (Keeping up with the Kardashians, Greek, and Vampire Diaries to name a few), and it only looks like they’re gaining momentum. You can check them out in Urbana at the Canopy Club with local favorites, Santah, on September 15th. If you can’t make it you should still checkout their blog where you can stream Houses for free: here.

Key Tracks: “The English Room” “To The Coast” and “Thieves”.

RIYL: The Pains of Being Pure at Heart, The Drums.