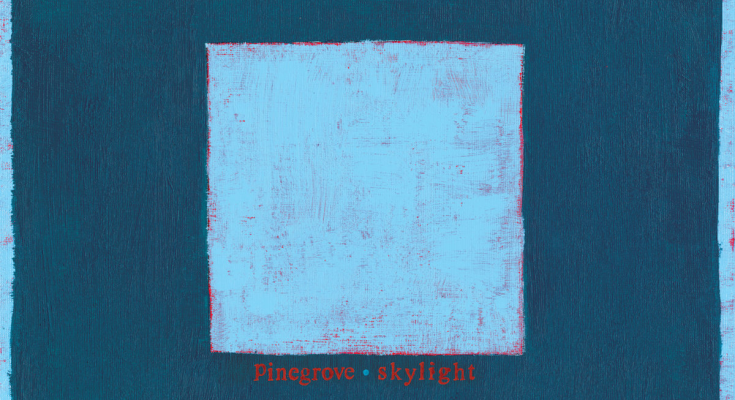 In honor of new music to come: a reflection on the band’s previous album Skylight. In recent news, Pinegrove, the alt-indie band from Montclair New Jersey announced and teased a new album Marigold to release January 17, 2020. With the announcement of the new album, the group released a single titled “Phase” along with a quirky official music video; the first of the kind for the band coming under their label Rough Trade Records. That video is rather satisfying, centralized around a man violently sleepwalking his way across town in the daytime to jam the song out with the band. It is fun to see the band progressing while releasing new content; welcome content to tide over music craving fans. However, with all the excitement surrounding new music, it seems like a good time to step back and admire what the band has become and anticipate what is to come.

There is plenty to say about Pinegrove. The band, now in their seventh year, has seen quite the ups and downs including a year-long hiatus requiring the cancellation of tour dates in 2017. However, Pinegrove was able to quietly re-emerge in 2018 with their third album titled Skylight. The band began in the early teens with the release of their first batch of songs in 2012 after the pair Drummer Zack
Levine and Singer Evan Stephens Hall united officially under the name Pinegrove (the two had played music together since they were seven years old). The other members of the band include soulfully twangy guitarist Sam Skinner and bassist Adan Carlo Feliciano. The band is rounded out by Nandi Rose Plunkett, who sings and adds auxiliary. For those unfamiliar, Pinegrove finds their niche somewhere under a classic alternative feel but with a twist of folk twang generated through the use of finger-picked guitars, slides, and even lap guitar. With all that said, however, the band orbits around the lead singer and frontman Evan Stephens-Hall and his uncanny ability to tell stories with his unique singing voice.

Skylight is no exception both stylistically and it is a clear step forward in the band’s progression; the songs are homey and comfortingly honest. Luckily, for fans, the band also released a series of videos on the making and recording of these songs called ‘Command + S,’ which revealed the band recording in a warm cabin in the woods on their own. The band seems like a family, and Skylight is a reflection of that in feeling.

Skylight begins with the feeling of being on a train. That may sound silly, but if you listen, you just might feel it too. The album begins driven in and moving forward on the back of the first track: “Rings,” This first song leads listeners through the nearly violent introspective mind of the honest-feeling story of what is Hall reflecting on experiences in his life. Moving forward, he notes: “singing this is the new way I behave now / and actually live by the shape of that sound”. Hall beautifully paints the feelings
of having to move forward, may it be in one way or another. The album continues, skating across themes of moving on, commitment, relationship, friendship, and love beautifully strung along to Pinegrove’s signature twangy guitars. The album does a great job creating a sense of emotion, and openness almost to the point to inspire and invite the listener to open up and release the emotions circulating our own, desires, doubts, and love; may it be platonic or romantic.

One thing has persisted as a theme in the songwriting of Hall, and that is his recognition to tell his friends that he loves them, a message I think we can all get behind. Hall noted in an interview with NPR “We love all sorts of things but maybe feel embarrassed about it for some reason”. It’s this kind of message that resonates through the song “Patterson & Leo;” one Hall says to have written outside of a thrift store in Patterson, New Jersey. The album is extremely consistent and wraps up beautifully as a project, one full of perspectives, experiences, and relatable feelings that music lovers fall for over and over again. Especially with nothing but beautiful projects so far, one can only be excited for what the future holds for Pinegrove and their new music, welcoming listeners new and old to resonate with their songs.