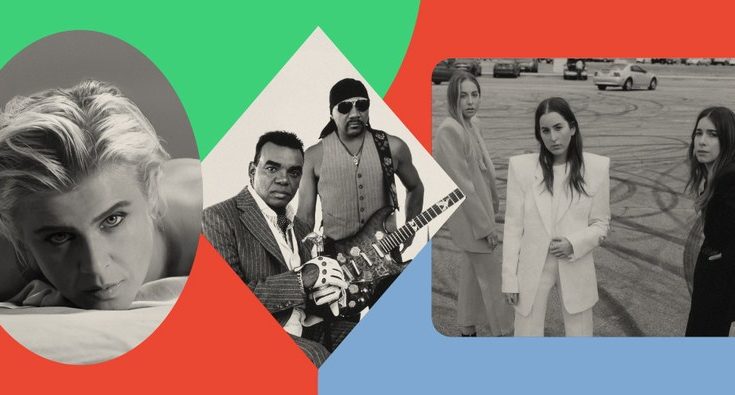 I got the honor of enjoying one out of three days of Pitchfork Music Festival. It took place this past weekend in Chicago where Union Park was blocked off in the blazing heat. First and foremost, Chicago has a beautiful knack for keeping up with their social media accounts to be modern and chic. Another factor I found interesting before going to the festival itself was the promotion around Pitchfork is highly focused around the music while lots of other festivals tend to draw upon the social aspects as well as the music. Pitchfork’s Instagram and website centered their photography and word choice entirely to make the music the focus. This was optimal for entering the festival as the music was going to be where the magic happened.

Besides Chicago’s beautiful skyline, the heat of the day was the first factor I noticed. It was at least 90 degrees, and there was the typical air of a festival, where clothing or no clothing goes.

Pitchfork Music Festival contained three stages (red, green, and blue) and contained a row of empty buses to sit in for cooling down. Other than the buses and a few foods and drink vendors, there was just grass and walkways between stages, leaving dry and hot adults wandering stage to stage.
The first artist I saw was Sky Ferriera, an American singer. She absolutely rocked the stage! She brought an edge to her performance that encouraged me to watch her on her stage of rebellion and simultaneously also feel like kicking down a mic. Although she contained the rocker chic presence, the way she worked with her band was really what pulled the set together.

She contained the typical teenage angst that makes sense as she composed her own fame through making music on MySpace, but it was released and remade into a beautiful composition of her stories with the help of her bandmates. The audience seemed interested in her energy; however, her tunes weren’t particularly memorable. Sky specifically showed a genuine movement towards coming across as punk rock which was noted, smeared red lipstick and all.

Pusha-T marked the shift from the daytime to evening performances, and he gave a heartfelt set of songs. Some rap artists focus on women and drugs, but Pusha-T had feel-good and opportunistic music that let everyone melt as they listened to him rap. Here I found the festival didn’t really have any overarching theme, some individuals were residents of Chicago just enjoying another weekend while others were there observing the composition of the festival, similar to myself.

I ventured onwards to find food. There were plenty (and I mean, plenty) of beer and liquor stands at this festival and two food stands. The food wasn’t too expensive, and the lines were nothing out of the ordinary. I ordered some curry fries and made my way to the next performance by Julia Holter. Her set began with in-depth spoken word centered around a woman’s fight when oppressed through sexuality and color. The speaker created an idea of being held back through something fair and virtuous while still creating a positive mentality to say this is my reality, but I will fight for goodness. As I ate my curly fries, I was genuinely touched. As a woman of color and growing up in a culture that heavily discourages women’s sexual freedom, I found the spoken word to be rightfully one of drama and discomfort. As with any rise against oppression, there was a sense of rivalry or bluntness in the air, but it paired seamlessly into the incoming set, even if Julia Holter wasn’t specifically speaking from her perspective.

I found the festival did a fantastic job of choosing the performances at the right time because as people were eating their dinners, Julia provided a very coffeehouse themed scene which demanded a carefree amount of attention. She held the audience from a teenage girl’s point of view where her and her electric guitar sang melodic tunes about astrology (which I love!) and other girly things. Her set put a warm and fuzzy sentiment into our bellies as we moved into the night.

At other festivals I’ve visited, this is where the direction would move away from the music to some kind of entertainment. However, as I mentioned, Pitchfork had a sense of business when coming to get something accomplished in relation to understanding the music itself. Side note: a festival’s sundown performance has the power to really choose the atmosphere. As sunset came, Mavis Staples’ set began. I was pleasantly surprised to see Mavis Staples as the artist during the evening. It was another perfect combination of time, where people were entering post-dinner tunes, and performance, a blues artist. Mavis Staples is an American gospel singer who switched between singing songs and speaking into the mic the wonders of which tamed the hearts of many. Here I found many of the attendees of Pitchfork relaxed and enjoyed the scene of Chicago. If anyone reading this has been to Chicago, you are well aware of the pride and joy that comes from its residency. Mavis Staples made sure to call out songs to be dedicated to those who live in Chicago. I personally loved this notion because it really put the symbol of Pitchfork into the authentic love for both music and the city. Blues has a deep place in the hearts of many Americans through its swings and touches and tunes, so it was a moment to join together and enjoy blues through her and the beautiful skyline.

Finally, the sun was set, and the first day was almost over. The final band I got the pleasure to see perform was HAIM, an all-group pop band (and they’re sisters!). HAIM performed delightfully and were personally more catchy in person than what I listened to them previously. They also created a feel good sense of love in the air as people winded down and sat on blankets and grass and spread out throughout the festival. I found the festival also didn’t create a sense of beginning and end, really emphasizing the freedom of the people coming to accomplish what they wanted to.

Overall, the festival was different than anything I’d experienced. The festival was dripping Chicago and music, and at the end of the day, I came home to a heightened (or ringing…) understanding of music and how it works with the person. The heat was made into another enjoyment and the food was cultured which was pleasant as well. It had an ideal balance between culture and American classics, including all ages and lots of types of people as well. If I could suggest Pitchfork to anyone, I would recommend putting thought into what the goal of listening to music is to the individual personally. I enjoyed the festival, and I’m happy I got to experience it!