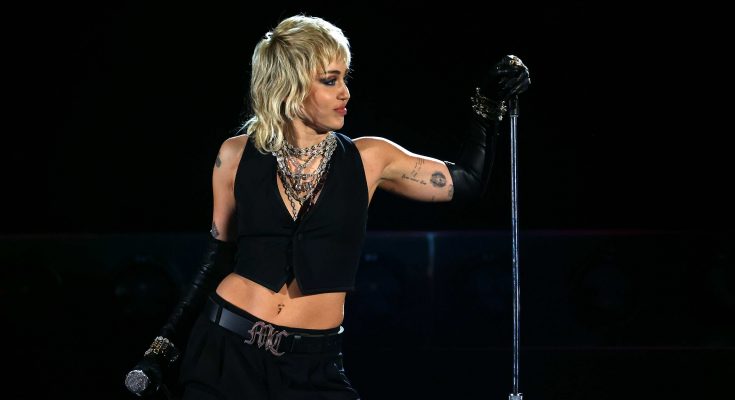 About a month ago, Miley Cyrus wrote a letter to her former alter ego Hannah Montana for the
show’s fifteenth anniversary. Since 2006, an entire generation has fallen in love and grown up
with the singer-songwriter, but, like other child stars, Cyrus has not always had an easy time living
in the spotlight. The “Bad Karma,” singer has opened up multiple times over the years about the
difficulties she has faced in the media. In almost every stage in the artist’s life, Cyrus has received
harsh backlash from critics and the general public. From restrictive contracts to controversies like
the MTV music awards, she has struggled to express herself without the media tearing her apart.

At the tail end of 2020, Cyrus released her album Plastic Hearts which included features from
Rock N’ Roll icons Joan Jett, Billy Idol, and Stevie Nicks. The star-studded album experienced a
lot of change in direction, alterations, and delay in its production. Miley initially intended to
release a series of EP’s that would work together to create the project, She is Miley Cyrus.
However, in a heart-warming Instagram post celebrating the release of the album, Cyrus revealed
that just when she thought it was completed, she lost most of her work alongside her Malibu
home in the Woolsey fire of 2018. Most of her collaborators still had much of the music but she
felt that her life had changed too much to release only part of her story. So, she told fans,
“Nature did what I now see as a favor and destroyed what I couldn’t let go of for myself. I lost my
house in a fire but found myself in its ashes.”

Two years later, Cyrus has released an album that showcased her seasoned vocals and heartfelt
truths alongside the artists that inspired her growing up. Cyrus covers, Blondie’s “Heart of Glass”
and The Cranberries’ “Zombie,” and showcases the Rock N’ Roll roots and range she’s had inside of her all along. Cyrus has been performing professionally since the age of thirteen and after years of singing, screaming, and smoking her voice has noticeably changed since her “Party in the USA” days. You can hear decades worth of love, pain, and passion in the star’s raspy belt as she sings the Blondie lyrics, “Lost inside, adorable illusion and I cannot hide. I’m the one you’re using, please don’t push me aside.”

As for the album’s own masterpieces, Cyrus brings your favorite rock legends back to the studio
to create songs that tie one generation to another. Fleetwood Mac’s Stevie Nicks lent Miley her
mystic vocals to mash up her 1981 hit, “Edge of Seventeen,” with Cyrus’s “Midnight Sky.” The
product radiates power and nostalgia. Joan Jett jumps on “Bad Karma”, where the two
showcase their vocal range and honest outlook on life. Apart from the iconic collaborations, Cyrus
expresses her raw opinions on life and love through the album’s songs. In “Never Be Me”, Cyrus
expresses her views on love and commitment as she sings the lyrics, “If you’re looking for stable,
that’ll never be me, but I hope that I’m able to be all that you need.”

The Miley that we have known and loved will forever be in our hearts, but now a new era has
begun. She has returned to her Rock N’ Roll roots and with that voice, she is exactly where she
belongs.