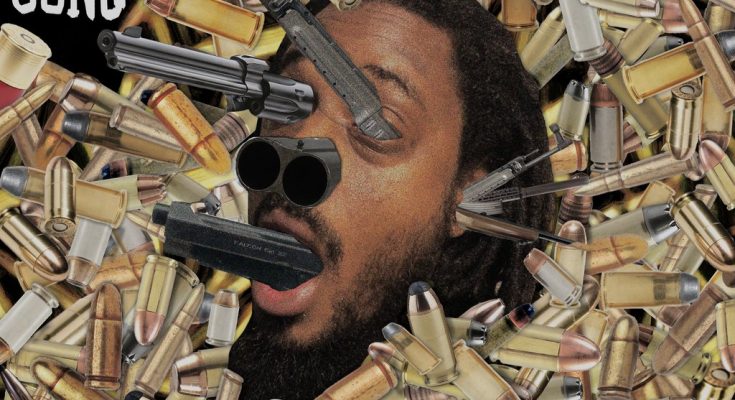 “Guns” is the highly anticipated follow-up to Quelle Chris’ 2017 album “Being You Is Great, I Wish I Could Be You More Often.” If “BYIGIWICBYMO” was a trip inside Chris’ mind then this is the complete opposite, instead focusing on the environment that shaped the Detroit rapper. The shift in Chris’ lyrics might have some fans worried but I can assure you this album is not without the dynamic flows and dense bars that Chris is known for. He merely changes the target of his lyrics to something slightly larger than what’s going on in his own mind.

As the title implies, this album provides some commentary on America’s gun problem but from the unique perspective of Quelle Chris who seems to have a bit of a different view when it comes to the mindset behind owning a gun and the proliferation of guns in certain communities. On the title track Chris details how guns have become commonplace in these underrepresented areas and why people living there feel need to own a firearm. Lines like “Might as well get you one, procrastinating will get you popped,” give some insight into the mindset a lot of people have when purchasing a firearm and the troubling implication that people see arming yourself as the only defense against someone else’s gun. On the chorus the mantra, “I be in your city, coming to a city near you,” is repeated in Chris’ deadpan delivery, which gives the song a real ominous tone and sets the stage well for the rest of the album.

Further political commentary is given on the song “It’s the Law.” Chris opens with the line “Let he who is without cast the first ‘Get-out-of-our-country’/ Oh the hypocrisy.” The rest of the song follows in a similar tone, with Chris stating that the current laws and ideologies of the United States don’t align with the religious tenets that some lawmakers seem to be basing these laws on. A large part of the album focuses on ideas like this as Chris has a lot to say on the problems our country is facing, but the instrumentals behind Chris’ topical bars shouldn’t be ignored.

Much of the production you’ll find on this album is by Chris himself with some tracks also featuring production from fellow underground legend Chris Keys. Whether it be the laid back, jazzy cuts like “Box of Wheaties” or the more grimy, truck-knockers like “Obamacare” the production you can find on this album is diverse and very satisfying to listen to. You’ll never feel like the tracks are blending together as you listen and each has its own distinct vibe. The coherence of the tracklist doesn’t seem to suffer as a result as Chris pads the end of many tracks with some skits or sound bits that contribute the underground flavor of the project.

This album also finds Chris on instrumentals I would’ve never thought I’d hear him on. The song “Straight Shot” for instance is a very clean sounding ballad that comes with a verse from rapper Cavalier and singing/production from Bilal Salaam. The song is introspective and mesmerizing with an equally awesome outro by comedian James Acaster. It’s something I never thought I would see Quelle Chris attempting and yet he pulls it off perfectly.

I think a lot of rap fans will be quick to compare this to “BYIGIWICBYMO” but I don’t really think the two are comparable. Chris seems to have approached these two projects quite differently, swapping witty bars for something more topical. “Guns” sees Chris looking in a slightly different direction than most of his previous work and I have to say I’m excited for where he’s heading. He’s come into his own as a rapper and producer, and after hearing this album I’m curious to see what’s next.