The Beatles are known for how they brought about a new sound when the world was musically dry and yearning for something new. The Beatles continuously made changes in not only the music industry, but also on society in more ways than one. On October 26, 1965, Queen Elizabeth II awarded each member of The Beatles an M.B.E. award, which stands for “Member of the Most Excellent Order of the British Empire.” This award is extremely respected because recipients are seen as community helpers because of their extensive service.

The Beatles being awarded the MBE was a large controversy because many people did not regard the highly popular group as very special when it came to helping the community. After The Beatles received their awards, many past recipients of the MBE returned their own awards in protest. Obviously this was a set back in morale among every member of The Beatles. John Lennon did not let this protest go unnoticed and spoke out saying: “Lots of people who complained about us receiving the MBE received theirs for heroism in the war, for killing people.” He went on to add: “We received ours for entertaining other people. I’d say we deserve ours more.” In 1969, John Lennon actually returned his MBE to the queen in protest of British involvement in the Biafran War in Vietnam.

When it comes down to it, the MBE award was traditionally given to community servants, whether they were heroes of war or otherwise. The idea of who should receive the award and who was most deserving was not a universal agreement. The Beatles were the odd man out when it comes to who has received the award, but that does not take away from their credibility.

Looking back at The Beatles’ career and the impact they had on the entire world, it cannot be denied that while they did not directly help the community, John Lennon was right in saying that his group entertained the people and lifted their morale. Although this is true, there is obviously no set requirement of who can receive the award and why. There is no universal agreement among the people as to who is best for the award either. People protested when The Beatles received their award because they were not war heroes, and John Lennon returned his award in protest of the war. Someone will always be upset about who received the award. Although the award was returned, it cannot be ignored that The Beatles were deserving of the award for their extreme impact on the world, both musically and socially. 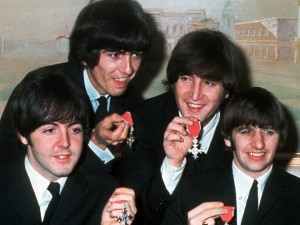