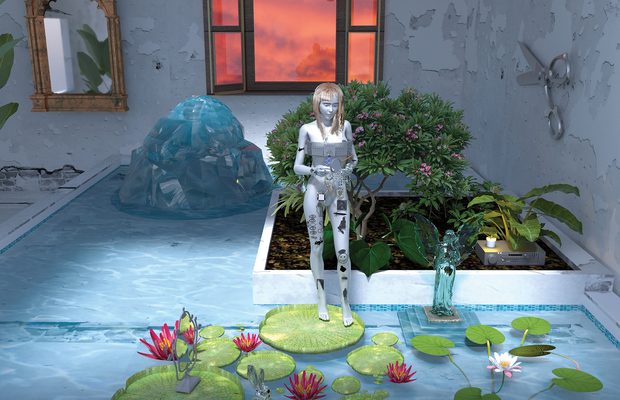 In Jean-Paul Sartre’s No Exit (Huis clos), three souls are locked in the same room in Hell, expecting there to be torturing devices to punish them for eternity. Instead, the three of them were perfectly matched to punish each other; they are each other’s torturers. Garcin and Estelle, at first, do not admit that this could be the case nor will they admit their reasons for eternal damnation. Inès tells them to stop lying and to confess, and she was also the one to figure out that they are each other’s torturers.

There are no mirrors in the room. Estelle does not think that she exists unless she can see herself in a mirror. She relies on the perception of others, inanimate like a mirror or animate like Inès, to verify her existence. Inès, on the other hand, is “painfully conscious” of herself and does not need to be defined by another’s judgment.

Now, how does this connect to Lala Lala’s newest album, I Want The Door To Open, besides the fact that I just read Huis clos and listened to I Want The Door To Open around the same time? It could be that both titles deal with there being no or a way out. I think this quote from Lillie West, better known as Lala Lala, explains it well: “How can anyone else know who you are? How can you know who anyone else is when all these different avatars or personalities or performances are happening simultaneously, in different places?” On this record, West is exploring consciousness in its many forms: our presentation to the world, how others see us, and who we are when we are alone.

“Color of the Pool” builds on the opener song’s dealings with how different light looks in water and in a mirror, where West is embodying both as she “wants to be the color of the pool” and expresses “And yes, you know I love it when we are both looking straight at me.” Are they looking into a mirror or into the water like Narcissus, who fell in love with his own reflection? The dark synth pulse fuels the song and later feeds into a saxophone solo from Adam Schatz of Landlady.

“DIVER” is meant to be the thesis of the record with an intentional reference to the Greek myth of Sisyphus, who cheated death twice and is eternally punished to roll a boulder up a hill in Hell for it to tumble down every time he nears the top. Here is where West is searching for the truth of self, whether it’s by diving down deep in the water or by pushing the rock up high. About the myth, West says, “I think it’s easy to feel like we keep making the same mistakes over and over again, that we never learn, that we’re Sisyphus; but time is actually a spiral that we move up. The key is falling in love with the labor of walking up the mountain.” The buildup in this song is layered with synths and a whole of brass, as well as an echo of backup vocals and the drumming heartbeat of Chicago’s own NNAMDÏ. This is a windows down kind of song (move over, Big Time Rush).

Segueing from one single to another is “Photo Photo,” featuring the haunting overlapping vocals of OHMME, yet another Chicago addition. In “Prove It,” West has outgrown her days to live in a fantasy (movie with Grapetooth), although the instrumentation is breezy and her vocals are airy. This is where West attempts to understand a person based on their online presentation from that of their real life. Continuing on with a dreamy atmosphere is “Straight & Narrow” and its glistening chimes, melodic strings, and swirling guitars. The 2019 National Youth Poet Laureate Kara Jackson sings the second verse, adding some more depth to the album with her vocals. Death Cab for Cutie’s Ben Gibbard harmonizes with West on “Plates.”

Branching off from her indie roots resulted in the psychedelic “Utopia Planet.” Despite the name, it kind of feels like the end of the world with the alarming synth and the stylings of Sen Morimoto (you guessed it: another Chicago artist), but it is comforting in a way. There are no more mirrors; one has to face their true self and let go. West’s grandma makes an appearance at the end of the track, explaining how she perceives West in a self-portrait.

Will the door ever open? Does that even matter now after this journey of the self? As mentioned earlier, what matters to West is falling in love with the journey as that is what brings freedom to understanding. I do not think that she is either Inès or Estelle. Inès felt too aware and too burdened by her existence, whereas Estelle could not even define her own and relied on others. On I Want The Door To Open, West explored her consciousness through multiple lenses, never more dependent on one than another.

Get your tickets for Saturday, April 16 at the Rose Bowl with Elton Aura or for another date: https://lalabandlala.com/TOUR

Listen to Lala Lala’s new album, I Want The Door To Open here: