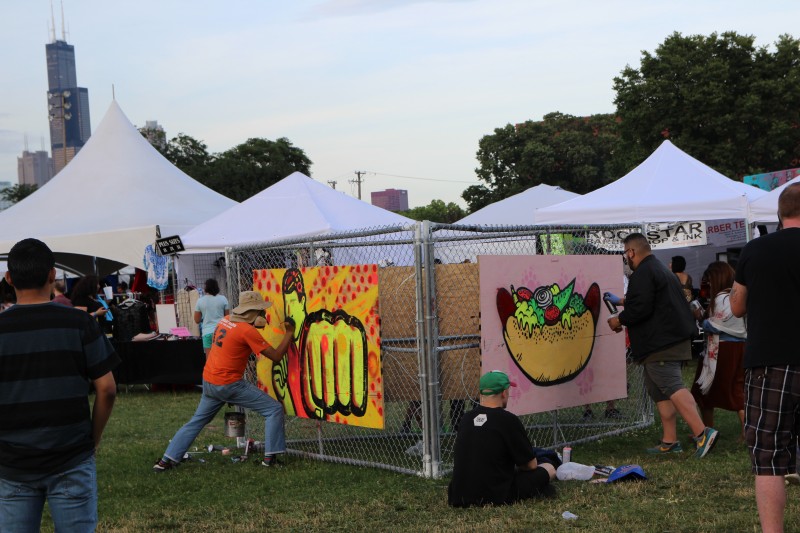 July 8-10, Ruido Fest took over Addams/Medill Park for the alternative festival’s second year. Though Ruido scaled up from last year in a few ways (most noticeably, with the addition of large carnival rides at the west end of the park), its overall mission remained the same: provide a space where people can celebrate Latin Alternative music of many shades. Mainstream press figures have dubbed the festival the “Latina/o Lollapalooza,” but all it takes is a quick stroll through festival grounds to understand that Ruido organizers and participants have tapped into something special, something no longer easily accessible at starfucked blockbuster festivals. So many excellent performances and other happenings took place at this year’s fest, and it would be impossible to cover it all, but below are some of our highlights. 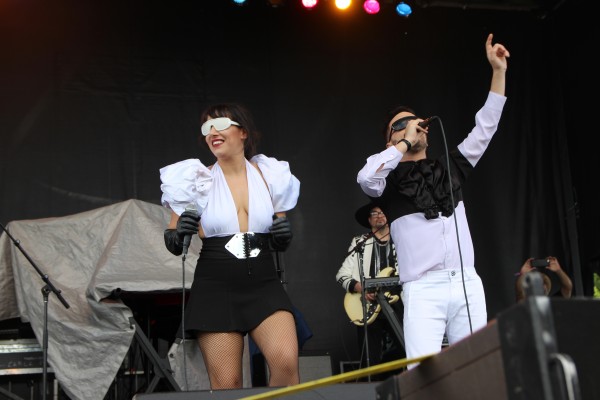 Miranda! – I didn’t know anything about this band going into their set, other than that their music has been described as “melodramatic electropop.” That description didn’t exactly have me dripping with anticipation, but Miranda! proved much more energetic and charismatic than expected. Like many who performed over the weekend, it was clear that Miranda! were genuinely thrilled to play for us all, and they burst through with songs full of adrenaline, unintimidated by the large, persistent crowd that gathered to see them. -C.S. 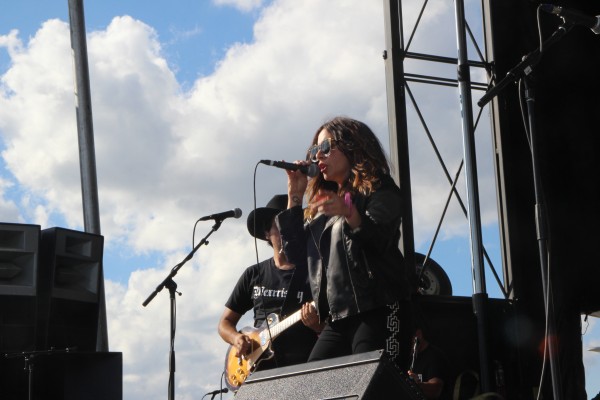 Mexrissey – A fairly new group on the scene, Mexrissey is (as you may have guessed) a Morrissey tribute band. Although, they go well beyond simply covering songs by the controversial but beloved Brit. Mexrissey adds new life to Morrissey’s tired tunes, making the songs their own while still reminding us of the music’s origins. Though I’ve heard a fair number of jokes thrown around about the band, their Friday set convinced me that the group is much more than a gimmick with a punny name. They can easily stand their ground as musicians and performers. That Morrissey provides the source material seems almost incidental. -C.S. 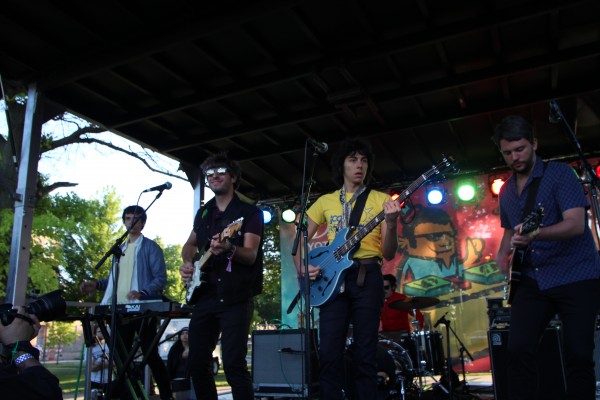 Banda de Turistas – One of only a couple of bands to return from last year, Banda de Turistas took full command of the Toyota stage on Saturday. Though the Argentinean band has worn many different stylistic hats over the last decade, their set last weekend conveyed a sense of calm fluidity, aimed more to please than shock. Their rather straightforward rock set was a nice palette cleanser near the end of the day, after hours of edgy performances, and prior to the biggest names of the night. -C.S. 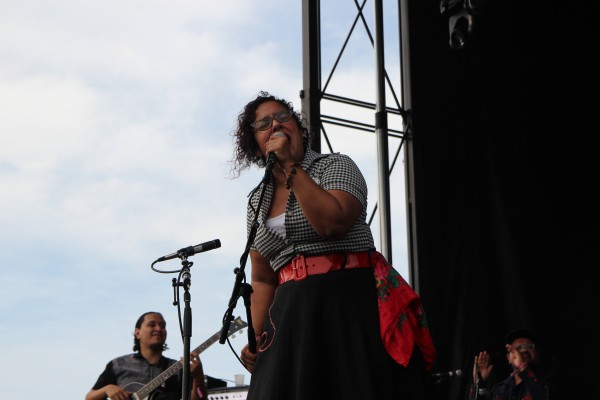 La Santa Cecilia – Apart from Le Butcherettes, La Santa Cecilia may be the band from this year’s lineup with the widest reach, in terms success (or at least recognition) among non-Latin audiences. Part of that has to do with their critical acclaim, but another factor is that this Grammy-winning band draws on countless musical strands to put together music that is diverse in sound, upbeat in rhythm, and extremely fun to dance to. Their set drew a huge crowd, especially for a band not slated as a headliner, and they had people engaged for the entire 55 minutes. A joy to watch, I imagine that those who did not know of the band prior to their set must have walked away converted. -C.S. 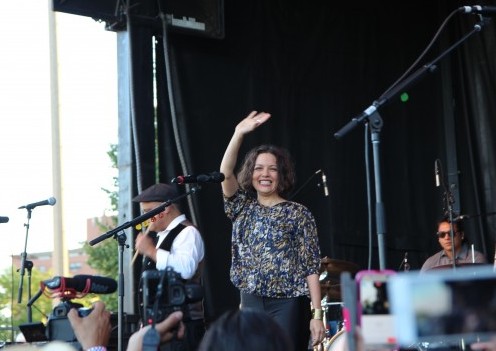 Natalia Lafourcade – Edging closer to adult-contemporary than any other band in the festival (as far as I could tell), Natalia’s fresh but relaxed songs acted as magnets for people in the park Saturday evening. She made 70 minutes feel like 20, and performed with an air of polished spontaneity. Or, if that’s too close to an oxymoron, then perhaps a better descriptor would be confident flexibility. It’s so rare to see an artist who is simultaneously classy and warm, buttoned up in a non-condescending way. The Mexican actress and Grammy winner is like your friend’s cool older sister who has an incredibly successful career but never, ever brags about it. Her set was well worth sticking around for, and she’s definitely someone worth keeping tabs on and going to see next time she comes through. -C.S. 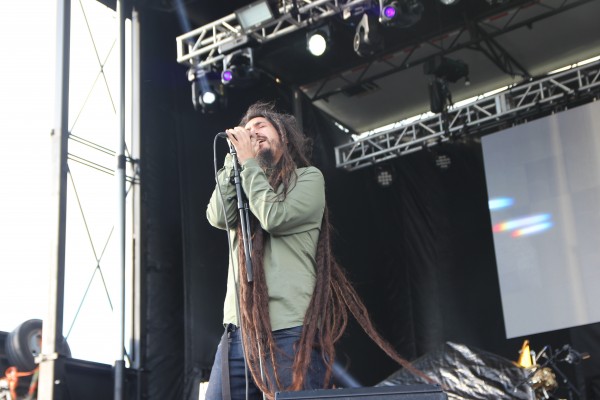 Gondwana – A straight-up reggae band, Gondwana is the kind of group that I enjoy for a while but can never really sink my teeth into. That said, their Friday performance was no joke. Clearly a group familiar with the big stage, Gondwana eased through an hour-long set of chill summer-vibes music, inviting lots of happy swaying among their all-ages crowd. -C.S. 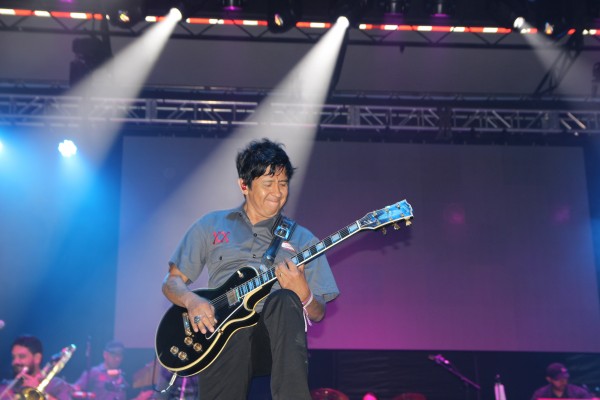 Panteon Rococo – One of Ruido’s headliners this year, veteran rock-powerhouse Panteon Rococo went full speed through to the end of Friday. Though they’ve been around for over twenty years and have a well-established fan base, Panteon performed with the fresh energy of a youthful band that has only just made it big. Their many members, and consequently rich sound, filled up the main stage with no trouble, and created enough buzz to carry people excitedly through the curfew and into the festival’s reopening Saturday afternoon. -C.S. 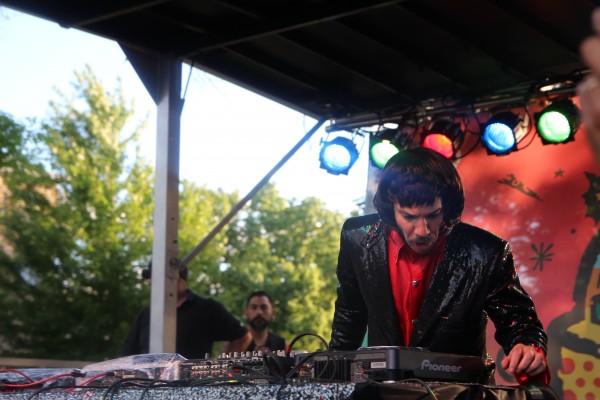 Silverio – I hadn’t heard of Silverio before I saw him on stage Friday night. He caught my attention because he was a thirty-year old dude wearing nothing but his horseshoe mustache and bright red speedo. But the cartoonish look is only the beginning of it. I saw him for about forty minutes and I think I heard a total of five beats and maybe 17 different words being sung over them. But rather than being a cool, disconnected presence that most DJ’s have, Silverio took a punk approach that had lots of humor injected into it. He would do ridiculous dances where he stomped and bashed and flung himself around. He had to dodge several beer cans. He mooned us and even showed a little front nudity. And no matter what this single man clad in swimwear yelled insults to the audience members. The whole crowd loved it and went nuts for every second of it. -M.M. 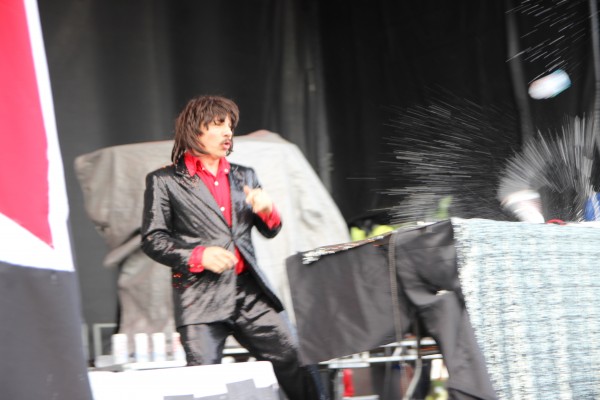 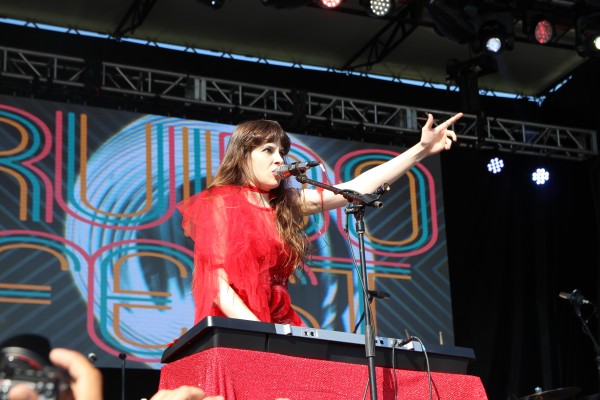 Le Butcherrettes – This band had a unique sound, leaning more towards modern garage bands like the Black Keys than other acts that day, and from the beginning they played like they were in a garage. Both bass and guitars were more attacked than strummed and the drummer was blasting away with Dave Grohl-like vigor (the poor guy had a long sleeve in this summer heat, but the matching red clothes did look cool). When they really got into the jams like “Henry Don’t Got Love,” you couldn’t help but bang your head. Lead singer Teri Gender Bender, would gently croon one line of the song and then scream the next. Her set-up gave her plenty of musical options, as she had her guitar strapped on, a DJ’s drum machine, and two separate microphones, each instrument having a unique color making for an overall psychedelic experience. -M.M. 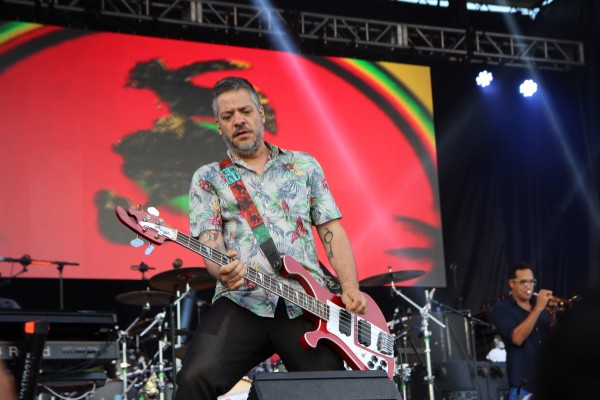 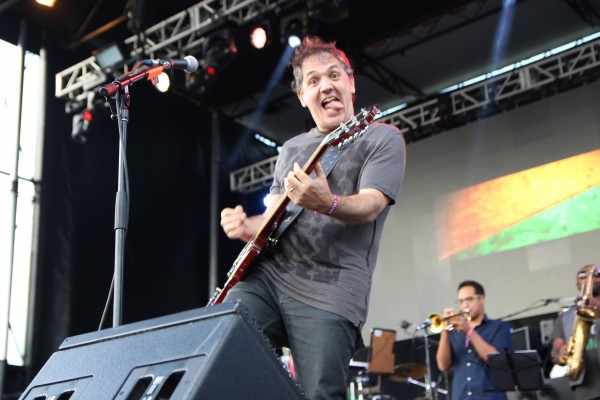 Sexy Zebras – These guys were also on the Toyota stage, proving it to be the most intimate of the three because of it’s size. People The guys lived up to half of the name, being tall handsome shirtless young gents. They had a bluesy modern rock rhythm that underlied RHCP-styled rap-singing. It’s the type of music that is meant to be listened to loud and liv, but again, what really sold it was the bands’ performance and interaction with the audience. For a while the lead singer played naked with only his guitar covering his privates. The bass player came down into the crowd (making the engineer have to run in with him to make sure the cables didn’t get caught or cut) and got everybody riled up to jump and holler with all their might. I recommend listening to their song “Búfalo Blanco,” because it’s easily their most fun song with the trademark fast pace. –M.M

Maldito Vecindad – This band headlined Saturday night, and there was plenty of hype. Because of the festival’s wider variety of music types, it attracted a wide variety of people, so the festival should have felt a bit of disconnectedness. I think this band is what really prevented that, being a classic band that has aged well in the past two decades. I remember they started with the best timing you could do. There was abut five minutes of relative silence since both stages had closed off for the night. The entire festival kind of homed onto the at&t stage. Gladly as soon as they took the stage, there was no disappointment.

They have a unique sound because it takes American-invented rock and roll in an unabashedly Mexican way. They were one of the first great Mexican bands to be targeted to kids, being pioneers similar to the Beatles. But even today they’re listenable for their lasting uniqueness. Their music picks a little bit from everything, with flamenco guitairs and ska rhythm and even some psychedelic song structure, each song sounds like a great message to Martians if they want to know what our blue dot sounds like.

He ruled the crowd with amazing charisma. Speaking in a beat poet’s rhythm, he got the people’s emotions stirring. Not one to shy away from politics, he talked about some of the current injustices happening both here in the United States and in Mexico. When the whole band played together though it felt like everybody was taken over by the same spirit. Every other earlier artist on that stage had a circle in the middle for the dancers and moshers of the audience. For Maldita Vecindad, you had to move if you were anywhere in the crowd, and be prepared to either dance to the slow Latin rhythm of “Kumbala” or jump around to the frenzy of “Pachuco.” -M.M.

Carla Morrison -You listen to Carla Morrison for when you need to feel the nice fuzzies. I want to pour myself some tea whenever I hear the melodic bassline of “Eres Tù” combined with her sweet, laidback singing. She had such a carefree spirit onstage it transported you to the Summer of Love. Two guys in the crowd started fighting before she said “Stop fighting! No fighting!” and at that point she became everybody’s cool aunt or sweet Kindergarten teacher. The band also had a mother earth feel, using acoustic guitars and upright bass. -M.M.