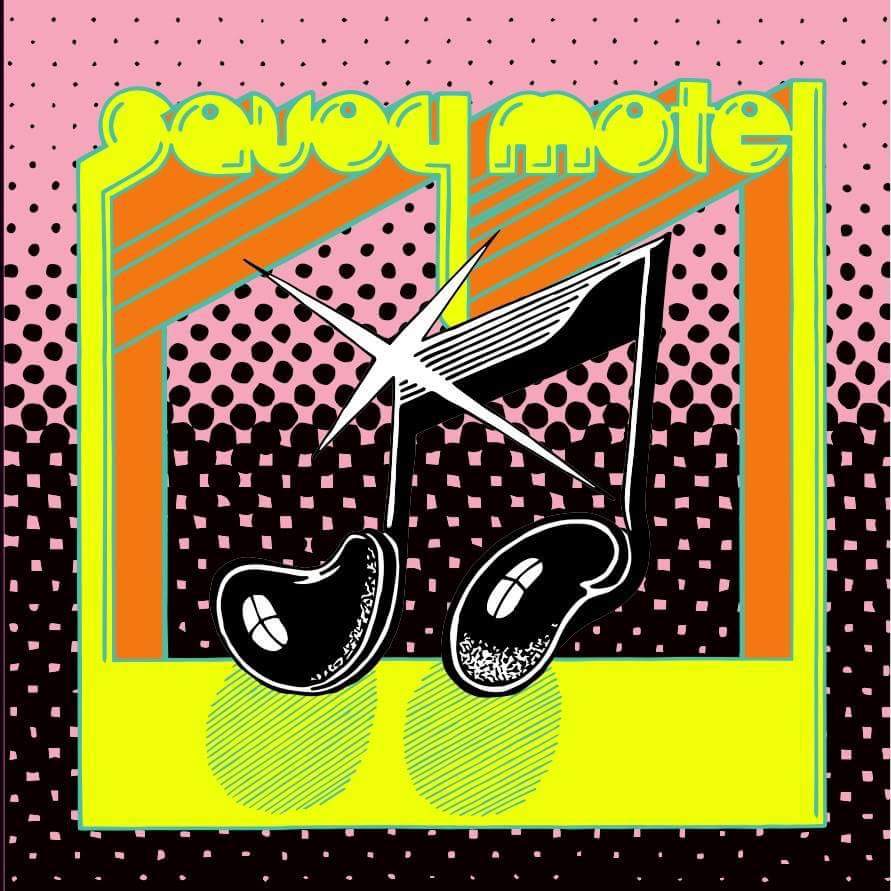 Savoy Motel is a new Nashville-grown garage rock band made up of three human players and a certain Maestro drum machine, which they brag on their website has been “featured on many hits of the 1970’s”. This may make other bands sound inauthentic, but really the only songs on their eponymous debut album that suffers from this is “Sorry People” and “Everyone Wants to Win”, with their short maraca intros that sounds too much like Pheonix to gel with the rest of this album full of hard jams. Most songs start with a psychedellic sound, and even “Mindless Blues” has a drum intro but with a reverse cymbal to take you far out, man.

Of course, the other instruments are just as good. Somewhat surprising for rock music, the bass is often the most prominent backing insrument, with its deep grooves and melodic, McCartney-like melodies. Perhaps because the bassist Jeffrey Novak is also the singer/producer, he also knows how to make even a simple thump thump rhythm like the breakdown in “Western Version Boogie” fill the room just as easily as he creates a hypnotic rhythm with Eastern flavored melody on the rest of the track. Another benefit he receives from doubling as producer is the unique tones he creates, as found in “Sorry People”

Fortunately, the album is produced to mix Mimi around the place, making it somewhat interesting to follow that instrument around the whole album. The album does that a lot actually, taking hints from the early heavy metal psychedellic albums of the late 1960’s, panning instruments differently to make the already dense music sound more dynamic and allowing each instrument to be heard. There are all sorts of sounds other than the main instruments (“Everybody Wants to Win” has a part with a piano played with panic), all competing for space.

It also helps that each band member plays with such intensity. The final instrumentalist, lead guitarist Dillon Watson, is constantly throwing different tricks into the album. Each song has a climactic guitar solo where he really lets it rip. The solo in “Sorry People” starts off with just a bar of the rhythm, before he plays roughly a million quiet notes leading into a soaring solo of classic blues rock full of fiery singing string bends. Watson really dedicates his music to the guitar gods of the 70’s like Page and Clapton.

On vocal duties we have Jessica McFarland with Galbierz. The singing on a lot of the tracks are chillingly white. Whereas the rest of the music is played like it’s the musician’s last song on this world, the singer sometimes sounds like he found a way to sing from the grave. There’s an even more ethereal effect on the double-tracked songs like “Western Version Boogie.” The singing that doesn’t feature this spooky effect, however, suffers for not committing to sounding detached or passionate. The most memorable parts of this album remains to be the instrumental parts.

The track listing of the album cannot be overlooked, taking more hints from rock albums of the 70’s by interspersing the songs by intensities and loudness, finally reaching a climax in the penultimate track “International Language.” The track starts off with an ominous whoosh sound and Mimi’s twangy guitars making a bright soundscape before a synthesizer creates sounds that reverb forever. This serves almost to clean our ear-pallettes before they enter a heavy groove with sounds of wind blowing, a la Dio’s “Holy Diver”. Watson then enters a solo that is full of vibrato as the rest of the band enters. Around the 4 minute mark is when the singer finally enters, finally, singing about international language (love? music?) as the song alternates between that and jam-duels between the guitars,bass, and keyboards. The song really captures the highlights of what sounds the band can create whether they’re jamming together or seemingly battling to be the loudest, the way rock and roll should be.