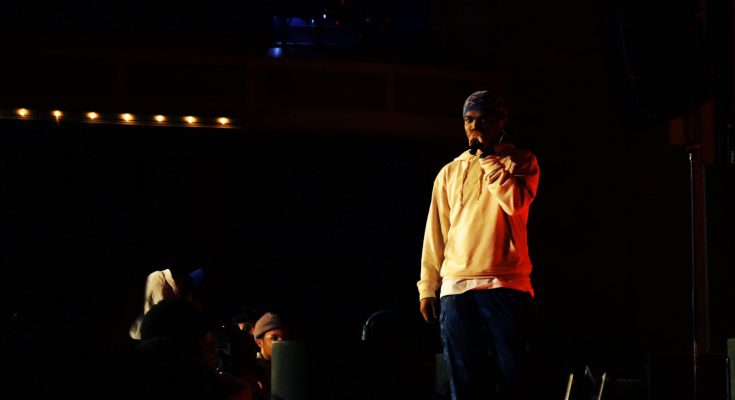 Smino stopped by Urbana the other for the first stop in his upcoming “Hoopti Tour.” And while Smino is a St. Louis native, I think campus is close enough to his hometown to warrant the hometown energy that Smino brought to his show. His personality was on full display as he was constantly interacting and talking with the crowd and giving the audience opportunities to get more involved with the show. Not that the crowd didn’t want to be involved in the show as Smino has a lot of fans here. He said it himself during the show that no matter where he performs nothing is like performing in the Midwest.

As a Midwest native myself, I love seeing artists like Smino rep their respective areas to the fullest and put on a great show for the fans that have been supporting them the longest. Smino definitely made sure you got your money’s worth, from the opening act to his own energized performance.

Smino’s opener was a local rapper that goes by the name of Ausar. And I have to say after hearing this rapper’s set I was thoroughly impressed and have been going through his whole Soundcloud discography since. He’s clearly influenced by other Chicago artists like Saba, Phoelix, or Benjamin Earl Turner as the instrumentals behind his lyrics were soulful and nostalgic. Ausar was a great combination of versatile flows with a quieter, understated delivery that made his messages even more potent. The live band behind him gave his performance a more organic feel and by the end of the show Ausar came off as such a likeable and earnest figure that I couldn’t help but want to support him. Never have I been so pleasantly surprised by an opening act and I highly recommend you check out Ausar’s Soundcloud.

However, I’d have to say Smino stole the show. He never let the energy of the crowd get too low and always found ways to get the audience members involved. At one point he even pulled a fan up on stage who had, “DM’d me like 5 times telling me it was his birthday.” The more upbeat, popular tracks like “Anita” and “KOVERT” definitely got the crowd moving, but I was surprised to see some of the more laid back, deeper cuts like “Netflix and Dusse” get just as many people singing along. Speaking of singing, Smino’s singing voice held up surprisingly well compared to the studio recordings. I didn’t think he was going to take all of those tough vocal inflections you hear all over his tracks and translate them to his live performance so effortlessly.

He definitely silenced any critic who claims he can’t sing as even an improvised track that saw Smino on the grand piano sounded just like a studio recording. Smino also played a snippet of an unreleased Kenny Beats collaboration that ended up being one of the harder hitting tracks in the setlist. Kenny teased the track awhile back on his Twitter but it is great to see Smino embrace the track and I hope to see more from this duo in the future. It’s a pair that I didn’t see coming but I’m happy to see Smino going out of his comfort zone with some more aggressive, trunk-knocking production.

I’ve always enjoyed Smino’s music but I’ve never been a real fan. I’ve never listened to his albums front to back and tried to absorb every word like I have with other artists. But this show has turned me into a fan. I have a newfound appreciation for the songs that I already knew and the songs that I didn’t know are now in my rotation regularly. Seeing Smino live gave me a taste of his personality and the person behind the music which made his previous album “blkswn” and his new album “NOIR” so much more enjoyable to me. I might even have to go back and listen to the mixtapes now.

If you are a fan of soulful, Midwest hip hop I highly recommend you check out Smino and if you have the chance to see him live I would not pass it up, as even someone who wasn’t that familiar with his music had a good time regardless.