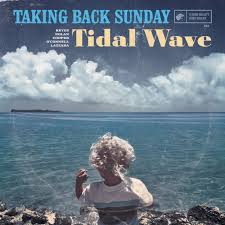 It is no surprise that a veteran band like Taking Back Sunday came in with intentions to go against expectations with Tidal Wave, their recently released seventh-album. In this latest release, they manage to put out a much more mature and tame body of work that is far from the “emocore” label that was placed upon them in their earlier days as a band. As a longtime fan and someone who has always enjoyed the abrasive raw energy of every single one of their live performances, it is hard to take a step back and admire some of the subtler moments of this album. To say Tidal Wave is a much quieter but delicate than its predecessor is an understatement. It is definitely that type of album that grows on you with time. As for this time around Lazzara and company choose to approach a much more folk rock vibe as opposed to sticking to only the catchy pop-punk hooks commonly found in Louder Now (2006), their most successful release

For months the band has teased tracks like “Tidal Wave” and their first single of this album “You Can’t Look Back” in which both track accurately define the entirety of the musical experience of this album. Some general similarities across the board with this release are the use of brief instrumental introduction in some of their tracks. For instance, the album opens in the same way Happiness Is (2014) did but only this time with a twist. The opening track “Death Wolf” begins mostly as eerily track that picks up speed into much more satisfying tempo filled with the onset of brash guitar that are reminiscent to their Tell All Your Friends days. It is the song off the album with the most similarities to their classic TBS sound and the most memorable. Still the choice of their first single for Tidal Wave is highly commendable mostly because “You Can’t Look Back” really captures the delightful aging of a band with still so much to offer to their genre. The vibe of the song is really unexpected but all the same time it is very moving since stays true to their aesthetic.

Only this time around Taking Back Sunday decided to be more restrained by include more of refine touching rock ballades that give you all the feels and will certainly be on replay. Perhaps the most beautiful one is “I Felt It Too” which starts off sweetly into a simple tune with a much more significant unpronounced meaning. However, a track like “We Don’t Go in There” is just as subtle but then completely transform into song with a surplus of infectious guitar melodies. This song in particular is amongst a few others that really tries to channel the sound of TAYF for obvious reasons (since it is the third album with the original line up back together again) but at the same times it marks the development of it. Another track off the album surely to be notable is “Fences” which happens to be the one I find most troubling. The initial impression I had on it was that it seemed just very expected and a cliché. However, the simplicity of its melody and predictability is what make it stand out more from some of the other tracks.

As noted by many of their longtime fans, this album in terms of time is slightly longer than their previously releases. At times the entire album does feel like becomes a bit too much for one piece of work. However, that may not necessarily be a terrible place to be in because surely over time this album grows on you. Initially, it was not as memorable to me as previous albums because of all the different vibes it tries to channel so some cohesion as a whole gets lost. Generally, it is favorable in my opinion and is filled with many subtle, great moments. Although it may not be as abrasive and filled with the same teenage angst found in the Taking Back Sunday songs we grew up with, it still definitely demonstrates how far they’ve come into a much more established sound.