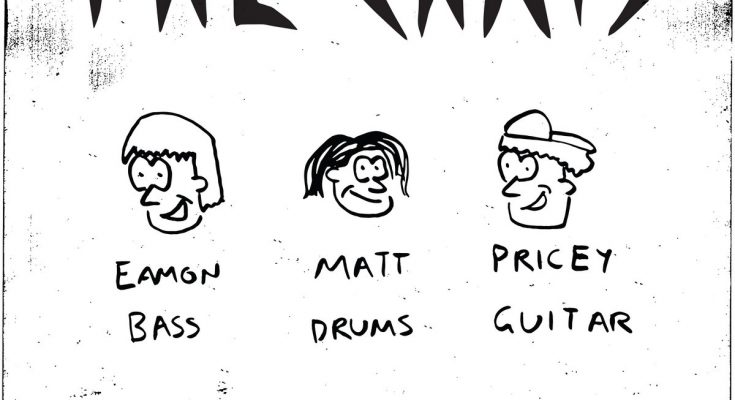 While everyone may be familiar with the concept “rock n’ roll is dead,” the same surely cannot be said about punk music. Akin to hip-hop, punk rock has evolved over the years by adopting innovative and exciting sounds to not only maintain its relevancy but insist on it. There are bands like Parquet Courts who present an alternative spin of the punk style while making astute sociopolitical commentary, bands like PUP who give a unique and modernized take on the classic grunge sound, and bands like IDLES who do a bit of both.

Then there are The Chats. These rowdy blokes from down under can really only be described one way, and that’s fun as hell. As so endearingly illustrated on the cover of the band’s latest album, The Chats are comprised of Eamond Sandwith on the bass, Matt Boggs on the drums, and Josh Price on the guitar. The three met in high school music class in Queensland, Australia, and formed The Chats all at the young age of 17. Known for their rowdy, happy-go-lucky punk rock sound, have been cranking out hilariously written punk bangers for the past several years. They first made waves with their hit single “Smoko,” which has over ten million views on YouTube and over eight million plays on Spotify. After a string of EPs and loose singles, The Chats’ first studio album, High Risk Behaviour, is finally here.

High Risk Behaviour immediately kicks off with a bang, having the adrenaline-pumping “Stinker” as the opening track. Not only do The Chats waste no time giving the listener a taste of what’s to come in the ensuing tracklist, but they also exhibit perhaps their most lovable skill: taking mundane and everyday circumstances and turning them into head-banging jams. “Stinker” is Australian slang for a deathly hot day, and that’s exactly what the song is about – a hot day. Nothing less, nothing more. Yet somehow, The Chats are able to take this seemingly ordinary and commonplace topic and turn it into a punk rock jam that will have you ready to run through a brick wall.

The Chats further exhibit this skill with songs like “Ross River” – which is about a bandmate finding out that a girl gives them Ross River fever, a virus native to Australia that is transmitted by mosquito bites – and my personal favorite song of theirs, “Pub Feed” – a tune simply about being hungry that slaps as hard as any top-shelf punk anthem. Another forte of The Chats is making side-splitting bangers imbued with overly detailed and equally outrageous storytelling. This ability is best illustrated through “Identity Theft” – a song about how buying weed off the internet turns into being framed for an armed robbery – as well as “Dine N Dash” – another head-bopping number that narrates a bandmate performing a dine-and-dash because they have no job and can’t pay for their meal.

If it hasn’t been made apparent yet, The Chats couldn’t care less about a lot of things. Be that as it may, their rowdy, carefree attitude gives the group loads of personality and makes them incredibly fun to listen to. They revel in the fact that they’re a gang of young and rowdy troublemakers, as displayed by “Keep the Grubs Out,” a song carried by a monologue of a manager kicking them out of his music venue because of their mullets and overall greasiness in appearance. The reckless, fun-loving spirit the band embodies has given us hilarious bangers that include “Drunk n Disorderly” and “The Clap” (the titles themselves I feel are sufficient explanation) along with other songs that have been previously discussed.

The most beautiful thing about The Chats is how strong of an identity they have. They know exactly who they are – rambunctious, racy, and mirthful degenerates that crank out short and punchy bangers – and they’re not going to try to be anything else. If you want to hear something new, fun, and adrenaline-pumping: at only 14 songs and 28 minutes, High Risk Behaviour is calling your name.