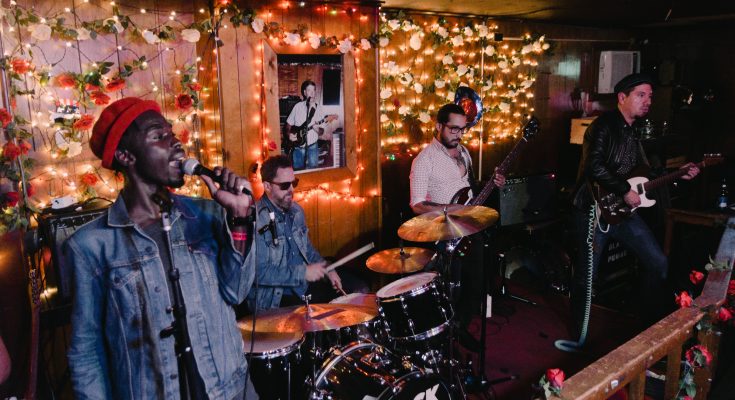 A half-full bar adorned with fake roses and white Christmas lights quickly became the most happening place in town as The Data Waves took the stage. The moment they started the first song, there was a palpable energy that ran through the whole joint. Everyone’s heads turned and many sprang up from their seats to take the dance floor. Those who didn’t still have their heads bopping and their toes tapping.

Each member of the band was so insanely talented, I struggled to focus on just one at a time. One thing you can always count on when you watch a funk band perform live is that each musician seems to be having as much fun playing their instrument as you do listening. Bassist, Aditya Kashyap, could not even make it through the first song before he felt the need to jump down from the stage and bounce along with the crowd while he played. The drummer, Shravan Raghuram, had a smile wide across his face the entire time that was contagious.

Though the band is clearly a jam band and puts a lot of their personality and unique spin on everything they play, two beloved melodies stuck out to me. “Brick House” and “Move On Up” found a way to sneak into the set in a perfect sort of cameo that reminded the audience of some of our favorite funk hits, while keeping things fresh and different.

The solos performed by tenor saxophonist, Kevin King, and guitarist, Sammy Gessesse were nothing short of incredible. Throughout the entire set, the two added such a classic grooviness that funk legends would be proud of, but their solos made the audience visibly drop down a level as if struck by gravity that weakened their knees.

Their whole set was an absolute blast to watch, and I wish it would have gone on longer, however, Black Pumas quickly followed.

I had never been to a show that felt more like a family reunion than a concert until I saw Black Pumas at Rose Bowl Tavern. With this being an off-campus bar, the audience seemed to be a majority of townspeople, as opposed to students. The show was incredibly intimate nonetheless, not just because of the size of the crowd or the venue. Eric Burton, the head vocalist, made us all feel like close friends as he came into the audience and hugged, high fived, shook hands, and danced with everyone. Before starting their song “Know You Better,” Burton made it clear to the audience that with each and every one of us, he wanted to do just that.

For every member of the band, it seemed that there was no place they felt more comfortable than playing this music on stage. They helped us to “fly together” and “cruise together” as Burton requested. The background singers were especially fun to watch. Their voices paired with Burton’s were stunning, but their dance moves and energy throughout kept everyone with a smile on their face. They helped get the audience to sway together, which fostered an incredible sense of oneness that seemed unbreakable.

One breakable thing, though, was a light that crashed down midshow into the front row of grooving students. No injuries!

Songs that stood out as particularly powerful and fan favorites were “Black Moon Rising” and “Colors” off their newly released, self-titled album, as well as their renditions of “Ain’t No Love In The Heart Of The City” by Bobby “Blue” Bland, and “Eleanor Rigby” by The Beatles. The latter being their encore and easily the funkiest, most soulful rendition of the song to date.

The songwriting abilities of Adrian Quesada and Eric Burton as a team are remarkable. We should all be thanking fate, our gods, or whatever we believe in for bringing these two together. I cannot wait to see what they do next.

M.E. is a junior Advertising major and a WPGU triple threat, serving as Head of On-Air Guest Booking, a music intern, and a DJ host for "We Want the Funk!" on Fridays from 2-3 p.m.

View all posts by M.E. Maloney →