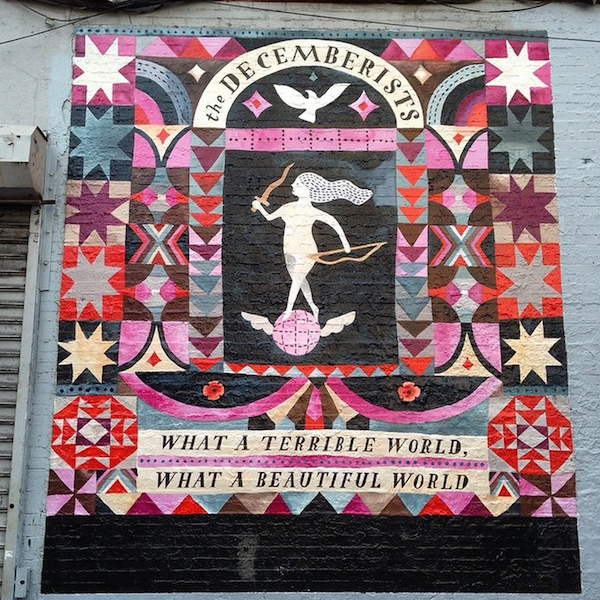 Often a band is faced with the problem of having to adjust their sound or writing to stay relevant in the industry, but sometimes this works out to be a good thing. The band may find that due to this process of change and adaptation they have created something new and worthwhile. In The Decemberists case, this may upset some fans of the original folk meets theater-kids-on-steroids dramatic ballads and melodramatic indie-rock. But when you think about it, have you ever been able to dance to a Decemberists album?

What A Terrible World, What A Wonderful World opens with “The Singer Addresses His Audience”, one of the most unexpected songs of the album that works great as an opener. Colin Meloy sings, “We know you had to build your life around us… We had to change some.” Although we know the Decemberists to be fairly proud of their career, this song comes to reveal something new from a band of old tricks. The song begins with Colin Meloy on guitar singing a melody that sounds like every Decemberists song you have ever heard before, but then it changes. The song ends with a transition into organic rock. The band seems to loosen up for once and jam. Lower in the mix a guitar solo flies everywhere over the group and a chorus of violins accent it at the end of bars.

The next song, “Cavalry Captain”, opens with almost a disco beat and dance-synth vibe. Since this is a band that contains so many layers and timbres, you would think that those may be lost in sound like that. But as the song continues the layers come out, and they become more apparent in the songs following. “Philomena” gives horn-like hits and keeps the dance groove going, until the sound opens up more in “Make Me Better”, one of the songs with a clear hook. The placement of these songs with their showcasing of different sounds from the band lead up to “Lake Song”, where each instrument comes out and creates a calm yet curious sound and atmosphere. The guitar sustains chords and the acoustic is almost lost and the violin winds in and out with a majestic melody of overdubs. The placement of these songs in the album’s lineup is credited to the old stylings of The Decemberists theatrical attributes, showing the connections between songs and their meaning to one another.

One problem with this album is its length. It is the first album from the group after a four year hiatus, so there is a good chance many of these songs have just been stored away all this time. Personally I find this annoying because it takes away the close knit connection of songs from one time and the album loses some of its artistic aesthetic. A concise album of songs that conveys the point and sound quickly is more convincing than a playlist on a disc. That is what Spotify is for. It almost feels that this is two albums sewn together. The first half being a new-found sound experiment for the band, the second half a reconciliation to their original dorian folk-jam music. For blind-loving Decemberists fans, this may just be your favorite part, fourteen whole songs to get you to sleep at night.

So if you have been wondering if Colin Meloy is still sad, or if The Decemberists will ever return to sing songs of being lost at sea navigating through the terrifying storms of life, wonder no longer. They are back and just as sad as ever. Just with some new tricks you would not expect.