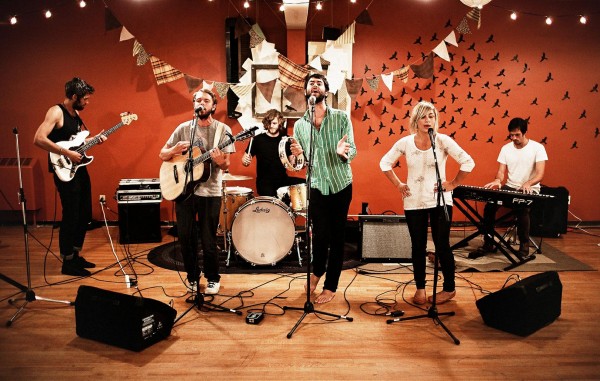 The Head and the Heart will be gracing the Canopy Club on Monday with their rich, Seattle-based folk rock. Josiah Johnson and Jonathan Russell, frontmen on vocals and guitar, are sure to treat fans and newcomers alike to a splendid night of upbeat and heartfelt tunes.
The band released their first album, a self-titled record full of passionate lyrics sung by the harmonious voices of Johnson, Russell and violinist Charity Rose Thielen, on Sub-Pop in 2010. Despite having just one album under their belts, The Head and the Heart have toured all over the U.S. and Europe in the past couple of years, opening for several major acts such as of Vampire Weekend and Death Cab For Cutie.
You may have been one of the thousands camped out throughout Millennium Park last summer to see Iron & Wine for free and seen, or at least heard, them open at the Pritzker Pavilion. Or perhaps you saw them open for The Decembrists at the Aragon Ballroom. It’s safe to say that over the years, The Head and the Heart have made a name for themselves in the world of indie folk and pop.
Whether you’ve experienced these folk rockers as an opening act or not, you are not going to want to miss them on their headlining tour. Expect those beautiful, melodic layered vocals heard on the self-titled album such as “Lost In My Mind” and “Sounds Like Hallelujah” as well as some new material, as the band is due out for a new album (at least in my opinion).
Doors at the Canopy Club open at 7pm and the show starts at 9:00 with Drew Grow & The Pastors’ Wives and Black Girls opening. The show is 18+ and is $15 in advance or $17 at the door. I would recommend those advanced tickets though; you won’t regret the purchase after seeing a such a phenomenal band.