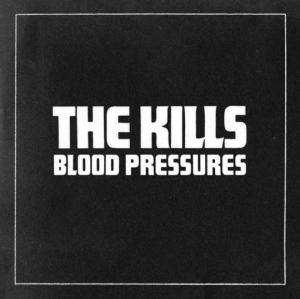 The garage/punk rock duo of vocalist Alison Mosshart (also the singer for The Dead Weather) and British guitarist Jamie Hince have been on the scene since the early 2000s. Although they are often compared to other groups in the genre (cough The White Stripes cough), The Kills have made three well received albums and their fourth work, Blood Pressures, exemplifies their ability to stand on their own.

Instead of slowly getting you accustomed to their sound, they hit you with it from the beginning of the first track, “Future Starts Slow.” The song’s driving drum work along with Hince’s strumming and both Hince and Mosshart’s vocals to give you a preview of the sonic experience you’re about to have.

Throughout the entire length of Blood Pressures you can hear the bluesy pop-rock roots that The Kills have taken and expanded on for this album. I’m using the term pop-rock in the most dark and distorted sense. The sheer power of their sound only makes you wonder what it would be like to witness them live. Listening to tracks such as “Heart is a Beating Drum” and “Nail in My Coffin” is a sure-fire way to get yourself dancing alone in your room.

Although this energy is heard on each track, The Kills do not stay on one level the whole album. They rock heavy and hard, but still manage to provide a few softer songs. “The Last Goodbye” introduces the piano onto the album, featuring a more melancholy and vulnerable Mosshart. If not softer, they still manage to give the listener variation in other ways as well. With closing track “Pots and Pans” The Kills create a more classic blues song incorporating minimal electric sound; the perfect way to wrap up this seductively cool album.

While some existing fans may be unsure about the mild departure The Kills have taken from the more identifiably pop beats heard on their previous albums such as 2008’s Midnight Bloom, it will be difficult to deny the dangerously fresh and moody rocking of Blood Pressures.

Recommended if you like: The Dead Weather, The Yeah Yeah Yeahs, Blood Red Shoes