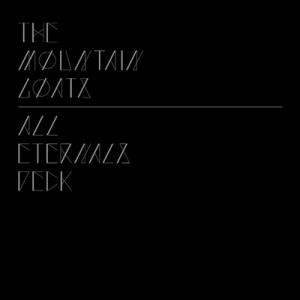 John Darnielle said recently on Sirius XMU that lyrics should sound like you came up with them while standing in front of the microphone. On All Eternals Deck he proved he meant these words. Each song is heartfelt and the lyrics are original and feel exactly like he described they should. His lyrical prowess is where this album’s greatness is seen. Darnielle has become known for his greatness as a lyricist and he did not disappoint here. The album may seem unimpressive at first listen, but after a few more passes and slowing down to listen to the lyrics the album grows and grows and The Mountain Goats’ maturity is seen.

The album starts off with a track that pulls the listener into the album and shows them what is to come with the rest. The folkiness that many fell in love with is felt and obviously not forgotten. Then he starts singing about vampires and the immediate reaction in today’s Twilight filled world is repulsion, but Darnielle grabs hold of your ears and does not let go. The medium tempo of the song hints at the flow of the rest of the tracks on the record, although different, all sticking to the main roots of The Mountain Goats.

This record is harder to get into than some albums, but continual listen will garner a greater appreciation for the album as a whole. The Mountain Goats released a complete album with each song working with the others. With this album Darnielle proved that any doubts people had in him were unfounded. His lyrical prowess, singing ability, and everything needed to be a successfully and great musician can be seen on this album. Any Mountain Goats fan and even those who are not can and will see the musical talent on this album.

The album may be coming out at the perfect time. With the recent success of The Decemberists, who have a similar sound to the Mountain Goats, this has the potential to be their most successful album. There seems to be a growing fan base for folk/rock in the past year and with an album this good, this fan base is sure to grow even more. The Mountain Goats proved on All Eternals Deck that folk/rock is stronger than ever and so are they.

Recommended if you like: The Decemberists, John Vanderslice and The Weakerthans.