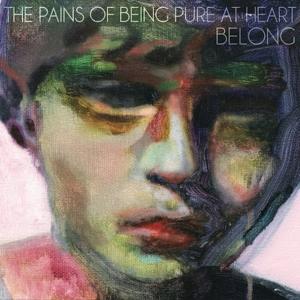 The Pains of Being Pure at Heart released their album at the perfect time. With the weather finally warming around the country they released and album perfect for this season. The album continual feels like it should be listened to outside on a perfect spring day. Everything on the tracks works together to give a feeling of warmth and happiness that will most likely remind most listeners of the coming summer and hope of fun and adventure it may bring. Belong exudes these feelings on almost every track and it is hard to escape from while listening.

Cleaning up their sound a bit, The Pains of Being Pure at Heart, start the record off with their strongest tracks on the album. Beginning with the first single, “Belong”, they emphasize their development as Indie pop-rockers and show what is to come with the rest of the record. After “Belong” fades out, in running comes “Heaven’s Gonna Happen Now”. With the upbeat tempo and soothing vocals of Kip Berman, regardless of the weather, listeners will

find it hard to not feel they are in the midst of summer. These feelings are only reaffirmed on the next track, “Heart in Your Heartbreak”, which can’t help but remind everyone of all those lost summer loves, good and bad alike.

The rest of the album follows the same basic pattern on most of the songs, but one song stands out more than the others. On “Girl of 1000 Dreams”, The Pains of Being Pure at Heart show their potential to move away from the pop side of pop/rock. They delve deeper into

the over-powering, distorted guitar of rock, but at the same time, maintain the upbeat drums that show listeners they are a pop/rock outfit. They give a taste of a different side of their music on this track, but at the core the same elements are in place. This album has

the potential to have many tracks on countless summer playlists. The Pains of Being Pure at Heart’s Belong is an excellent follow up to their debut and may come to define many summers in the coming months.

Recommended if you like: Girls, Yuck and Smith Westerns.