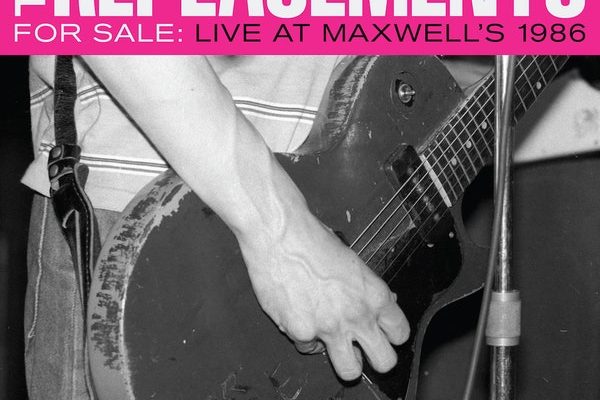 Let’s turn the dial back (to the left, if you will) to February 4, 1986, almost thirty-five years ago. A couple of weeks after their infamous Saturday Night Live performance, the Replacements took on Maxwell’s in Hoboken, New Jersey. The idea behind this gig was to capture their excellence on stage. Instead of being released shortly after, For Sale: Live at Maxwell’s 1986 hit the fan in 2017.

There is a lot of life in these songs. This recording captures the range of their catalogue, riddled with their fast and loud playing. You are greeted with two Hootenanny (1983) songs back to back (baby, that’s a fact) full of fury. They play their newer stuff off of Tim (1985), demonstrating their natural evolution from the punk days of Sorry Ma (1981) and Stink (1982). The set is all over the place, which should be expected from the ‘Mats, but you can depend on Chris Mars’ drumming to keep the rest in check. They can go from the thrashing powerhouse of “I’m in Trouble” to songs of longing like “Left of the Dial” and back to domination with “God Damn Job” and then back again to a state of devastation through “Answering Machine” with sheer willpower.

The Replacements take a stab at covers throughout the set. They make it through some of Sweet’s “Fox on the Run” carelessly and get stuck in the middle, stopping after a minute. It was within their reach. I’ll stop with the puns. More successful covers come later on. We already know that they can play “Black Diamond” better than Kiss, as they released it on the glorious Let it Be in 1984, but in case you are not convinced, the band plays it with much authority. The Replacements do not only steal album titles but also songs from the Beatles. Their rendition of “Nowhere Man” is as rough as they know how. Other covers include T. Rex’s “Baby Strange” and Vanity Fare’s “Hitchin’ a Ride.”

Of course, I love the way the ‘Mats play, and I could go on about their performance. However, the real treat to me is the banter. From lead singer Paul Westerberg’s shouts of “Murder!” throughout the set to the call of fans’ song requests, this album will become your favorite thing.

It is moments like “Could you give me a little more of that slap in the monitor there?” “Slap!” where you can see the dynamic between the band. The former, Westerberg, and the latter, bassist Tommy Stinson (I imagine), say that after “Hold My Life.” It is something I look forward to every time I hear it. Another instance of the band’s dynamic is after “Answering Machine,” when a drunk fan asked for “Color Me Impressed,” which was played earlier on in the night. “I think we mighta tried it once,” replies Westerberg. “We did?” asks a concerned Bob Stinson, the lead guitarist.

They do not shy away from slower tunes. “If Only You Were Lonely” features stumbles through the lyrics: “I ain’t very good but I can prac — no wait, that ain’t right.” I guess he just forgot his one line and said what he felt.

After the song, Westerberg, true to his self-deprecating nature, remarks, “I know this ain’t the rockingest show of our career. Yeah, I know it ain’t.” After all of these years waiting for a non-bootleg recording of the Replacements, we finally got one. As a fan who was not even alive when they were rocking (not including their reunion tour), this album makes me feel like I am there with the misfit gang in their heyday. I heard stories about their shows and how you are never sure about how they are going to perform. Have they had enough alcohol to sound good, or did they have too much alcohol to the point that they are all sloppy? This record is the perfect mix of both.

This set would not be complete without some more humor: “Thanks, guys…We’re getting to be tired, old men,” chirps Westerberg after their last song. Oh, how this joke has aged since he’s now sixty blue and all.