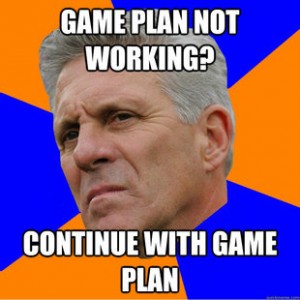 It was only a matter of time…

Under the seven years of Zook’s reign, we had one winning season back in 2007. Thanks to our 9-3 season, Illini fans, for the first time in a long time, could smell the sweet smell of roses in Pasadena. However, that sweet smell began to turn stomachs as our Fighting Illini got crushed by the USC Trojans 49-17; but, despite the loss at the Rose Bowl, hopes were high for the seasons to come.

As the years went on, those hopes dissolved. Sure, there were little pick me ups along the way like an appearance (and win) at the Texas Bowl and a 6-0 start to the season this year, but we all know what happened to our record after that….and really, there is only so much a loyal fan can take.

As the losses began to mount, blame was placed upon Zook in every form imaginable; from the stories in the media to internet memes, Zook (and his blunders) we’re everywhere.

But the final straw seems to have come after the loss to the Minnesota Golden Gophers. Not only was it the sixth straight loss of the season, but it was a loss to a bowl ineligible team that was the nail in the coffin.

And if you’re curious about all the other memes floating around the web, here is your link to some laughs.