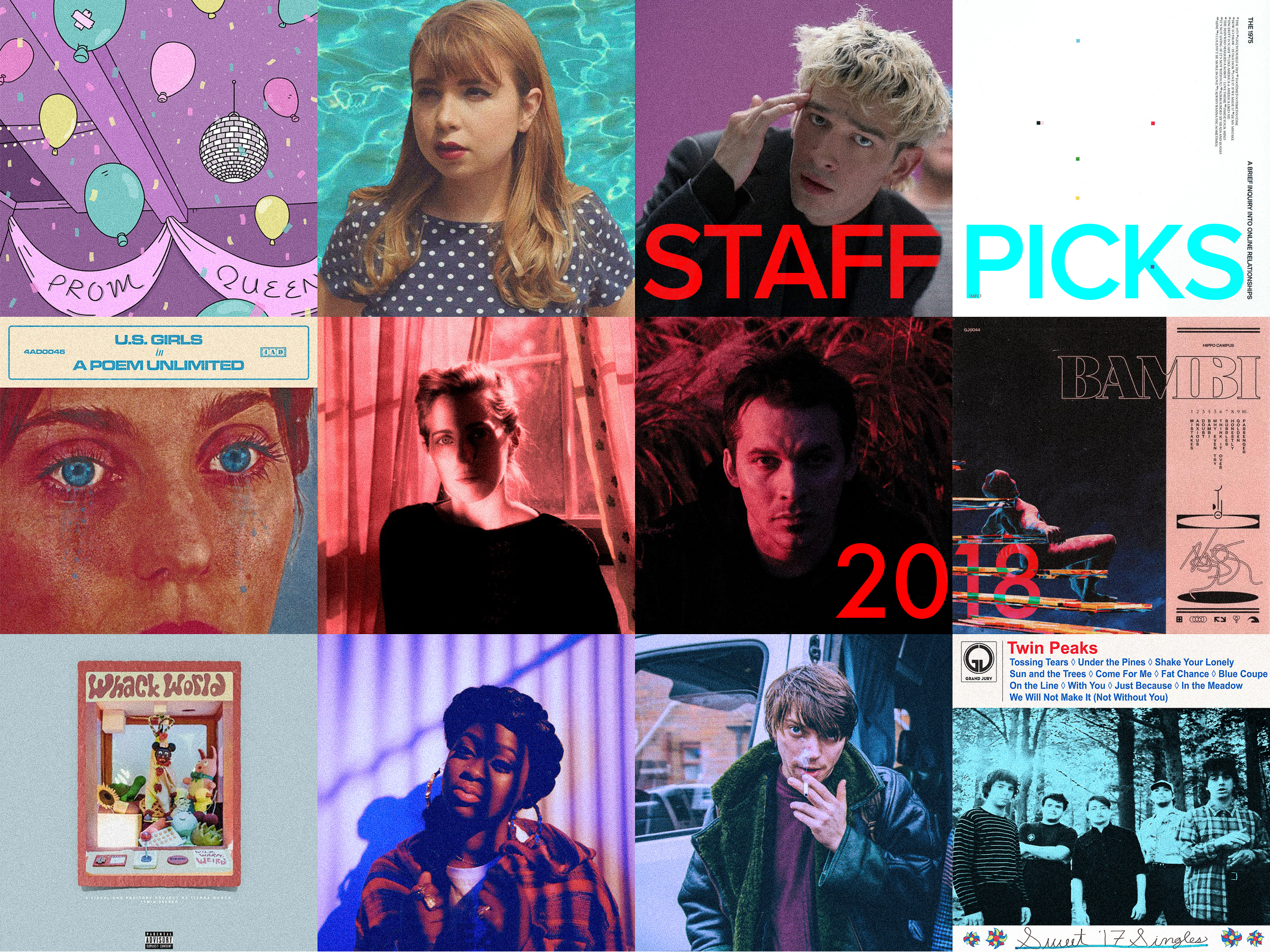 The last 12 months proved unsurprisingly capable of grabbing our attention. In 2018, we’ve seen veterans holding their ground, some overhyped albums finally dropping, a few hidden gems emerging here and there, but at the same time, a weird — but good — feeling. This year exploded with new faces and then-lowkey artists finally getting the praise deserved. The WPGU web writing team is proud to share, in no particular order, our top picks for 2018 — alongside what we believe are the 50 best albums and EPs of the year.

In September of this year, Hippo Campus released their triumphant sophomore LP, “Bambi.” The album quite starkly contrasts their debut, which was released a mere year and a half prior. Toning down a bit on the playful, captivating indie pop that propelled them into the indie spotlight, the young Minnesota natives take a risk on “Bambi” —one that pays off.

The band has stated that “Bambi” is experimental for them. The album is their attempt at capturing the present — capturing their feelings and emotions at times of uncertainty, doubt, and hopelessness —and translating that into music. Topics like mental health issues and the difficulty of navigating adult relationships are common on the ten tracks, and the things they feel are not only expressed in the lyrics but in the music itself. For example, the track “Anxious” expresses the feeling of anxiety lyrically (“This head won’t quiet down/For a single thought”) and instrumentally as the intensity of the music kicks up throughout the song and the desperation in lead singer Jake Luppen’s voice grows with each word.

Releasing an album so different from their music before is a risk with a beautiful outcome. “Bambi” illustrates what it is like to be human without any sugarcoating. Hippo Campus is transparent in Bambi’s message, bold in its delivery, and fearless in its release. On “Bambie,” Hippo Campus transitions from an ordinary band to a group of real artists, unafraid to push boundaries and take chances.

Twin Peaks’ “Sweet ’17 Singles” has occupied much of my headspace throughout 2018, placing as the number one artist on my Spotify Wrapped for the year. I have a strong connection to these dudes, as they were one of my first big shows I attended in high school. One element I would pay extra attention to on this album is the keyboard. It creates a more delicate sound than what has been.

A personal favorite track on the album is “Blue Coupe.” This song highlights the keyboard with Jack Dolan on vocals. Although Twin Peaks branches out a little on this album stylistically, there are still tracks that are classic Twin Peaks such as “In the Meadow.” This song highlights the traditional rock elements the band is known for playing. If you are just getting into Twin Peaks, “Sweet ‘17 Singles” is a great place to start.

Meg Remy captures the female perspective on the current political climate perfectly with her latest album under the U.S. Girls name. “In A Poem Unlimited” is a sonic collage that mashes surf-rock, funk, glam, and disco into a thoughtful, yet danceable 40-minute tracklist. The instrumentals are hard hitting and groovy on every track. Whether it’s the swirling synths of the opening track “Velvet 4 Sale” or the grimey guitar chords in “Incidental Boogie” Remy’s voice seems effortless over each kind of sonic background this album has to offer. A personal favorite track of mine was the single M.A.H which stands for “Mad As Hell.” On the track Remy addresses the Obama administration and its controversial use of drone warfare, something Remy described as, “the coward’s weapon of choice.” And while I appreciate the politically charged message my favorite parts of the track are the infectious beat and Remy’s amazing delivery of the hook. The way she croons, “As if you couldn’t tell, I’m mad as hell” is easily one of my favorite musical moments of 2018 and many more of them came courtesy of “In A Poem Unlimited.”

Another standout track is “Pearly Gates” where Remy imagines a world where even a place as utopian as heaven is dominated by men and women are still expected to give into a man’s every want and need. The hook is particularly potent in its message as it claims, “You’ll never be safe even if your at the gate, give it up you’re just some man’s daughter.” The instrumental behind it includes is a very funky bassline and the occasional turntable scratches peppered into it as well. The last track “Time” sums up the rage that’s been building throughout the album perfectly with a with a guitar solo followed by a saxophone solo over a somewhat claustrophobic beat. The sounds of wailing police sirens can be heard in the background as the song comes to a slow halt and the album ends. Remy, over the course of 40 minutes, has managed to capture all of the anger and frustrations felt as a female living today and she does it in the grooviest way possible.

“Prom Queen” may be #35 on WPGU’s top albums of 2018 list, but on my personal list it’s definitely number one. This 15-minute EP was my introduction to the Chicago-based band Beach Bunny, a band that has quickly become one of my favorite acts in the five short months since “Prom Queen” was released. Beach Bunny started off as an acoustic solo act formed by Lili Trifilo who was later joined by Matt Henkels on guitar, Jon Alvarado on drums and Aidan Cada on bass. While Beach Bunny had a great acoustic sound, “Prom Queen” is proof that Beach Bunny thrives as a fully formed band.

The self-proclaimed “sad girl” sound fits in perfectly with lyrics describing heartache and growing older, sometimes even a combination of both as noted in “Adulting.” As I wrote in my earlier review of “Prom Queen”: “all the lyrics feel so familiar, as if Trifilio took the words right from my mouth. It’s comforting to find a new artist that makes music for exactly how you feel.”

43
The 1975 – A Brief Inquiry Into Online Relationships

The 1975 has prompted a lot of conversation, both positive and negative, with their newest album, “A Brief Inquiry into Online Relationships.” If you haven’t listened to this yet, you should definitely give it a try because it’s a really interesting record. I suggest that you find a quiet space, get rid of any distractions, and just take in the album the first time you listen to it. There is so much packed into 58 minutes of music and you won’t be able to take it all in if you’re just casually listening to it while doing homework or something else that requires mental effort.

The 1975 is known for their unique sound, but “A Brief Inquiry into Online Relationships” takes this sound to entirely new level. There are songs like “The 1975” and “Inside Your Mind” that will be very familiar to those conversant with The 1975, but there are also songs like “Give Yourself a Try,” a song about the authenticity of the self and relationships, that don’t sound like anything The 1975 has done before.

“A Brief Inquiry into Online Relationships” has many upbeat songs that generate a positive vibe and will have you dancing around the room, but a lot of these songs also contain lyrics that are much less lighthearted than the music. Lead singer Matty Healy opens up about his heroin addiction in “It’s Not Living (If It’s Not With You),” one of my favorite tracks off the album. In “Love It If We Made It,” the band mentions a lot of issues present in the world at the moment that have contributed to the confusing, yet interesting world we’re living in, noting that “modernity has failed us.”

There is so much going on in “A Brief Inquiry Into Online Relationships” and it would take hours to unpack, so it is definitely worth listening to.

Tierra Whack’s “Whack World” might just be the most refreshing project released in 2018. Each track comes in at a clean minute, no more, no less — the album itself is a quick 15 minutes full of bite-sized tunes. And while the album’s odd format may seem comical, the Philadelphia-born rapper means no funny business. Coupled with the 15-minute short film, the entire multimedia project is a pastel-filled masterpiece.

On “Hungry Hippo,” Whack opts for catchy choruses and playful, wah-wah melodies. “Silly Sam” sounds more like a cheerful lullaby on a trap beat than anything (and that’s a good thing.) And then you have tracks like “Sore Loser” and “Fruit Salad” where Whack just goes hard.

But that’s the best part about the project: One minute, Whack is spitting bars about breaking some boy’s heart, and the next she’s referencing patty cake and Mario. “Whack World” is far from a novelty album. It’s a gem that distinguished itself from everything else released this year.

45. Florence and the Machine – High as Hope

5. Courtney Barnett – Tell Me How You Really Feel