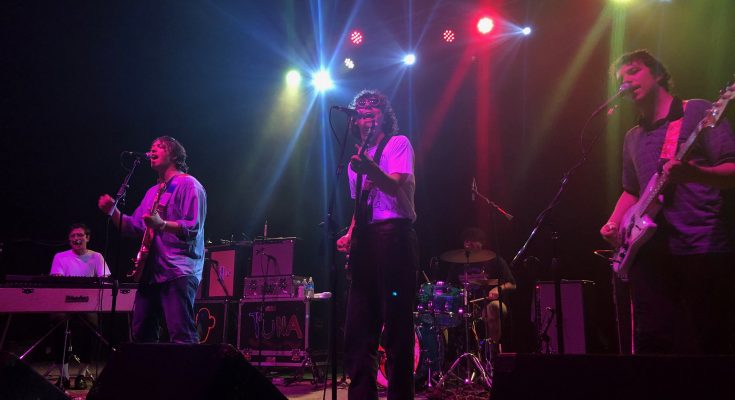 “Tonight’s the night,” Twin Peaks’ guitarist/vocalist Clay Frankel said as the five-piece band took the stage of the Canopy Club. “It cannot be yesterday, and it will not be tomorrow night. Tonight is the night.” And what a night it was- with performances by three Chicago-born bands, Wednesday night’s show was one the audience won’t soon forget.

Ex Okays was the first band of the night to perform. Born on the southern half of Chicago, the indie-rock outfit is an essential member of the Urbana-Champaign music scene, often performing at smaller venues and house shows in the area. The band’s ever-growing student fan base was on display at the show, myself included- every time I’m able to see the Ex Okays live, they continue to impress me with their unique combination of hard-rocker attitudes and reliability as young people. The five members kept the crowd dancing with their high energy performance, but slowed things down for a crowd favorite of their set, “Bothersome.” The song, recorded by the band at home and released last year, takes on a more anthemic sound, lending itself perfectly to live performance. Ex Okays is one of those bands that can make a venue of any size feel like a house show; their ability to make larger venues like the main stage of the Canopy Club still feel casual and interactive is one of their greatest skills as artists.

Up next was Post Animal, another Chicago-born band that is accompanying Twin Peaks on their tour. Post Animal kept the crowd’s energy up, interacting with the audience throughout their set and performing hits such as “When I Get Home” and “Ralphie.” The band’s unique sound, reminiscent of psychedelic rock of the sixties blended with modern riffs and lyricism, was something I was excited to hear live, and I was not disappointed. Post Animal is quickly making a name for themselves as openers for bands like Twin Peaks and Wavves and on the festival circuit, and their dreamy set made it clear that they are ones to watch in the Chicago music scene.

Post-openers, Twin Peaks took the stage with a slow-burning performance of their 2018 release “Tossing Tears.” The four-minute song is full of instrumental breaks, which allowed each band member’s talents to shine through. It’s rare to find a band that can be all at once goofy, quirky, and still bring the house down with its performances; Twin Peaks is one of these bands. Their set is as much an exercise in musicianship as it is one in showmanship; from Cadien Lake James, guitarist/vocalist, playing a guitar solo backward at the very edge of the stage to Clay Frankel’s AC/DC-esque guitar antics to bassist Jack Dolan pouring a full beer on both of them, the repeated mantra of “tonight is the night” seemed fitting for the show. “Butterfly” was a crowd favorite, and was a defining moment of the show as the crowd all chanted the outro together along with the band. “Walk to the One You Love” was another favorite of their set. The song’s unique, retro bassline combined with drummer Connor Brodner’s drums and Collin Croom’s keyboard showed off the versatility of the band’s sound when compared to the slower, more melancholy performance of “Shake Your Lonely.” As their set ended, the crowd chanted for another song; the band delivered with not one, but two more songs, including their hit “Making Breakfast.” Throughout the entire performance, I didn’t see a single person standing still; the dancing and general excitement of the crowd came to a head during “Making Breakfast.” Twin Peaks is a band you have to see in concert at least once if you are a fan of live music; their show was not only full of impressive renditions of already-impressive recordings, but extremely entertaining, funny, and something the crowd will remember for a long while.

Wednesday’s show was a testament to the fact that live music is as much a listening as an interactive experience. The three bands brought their unique sounds to Urbana and made the main stage of the Canopy Club a place well within the audience’s reach.