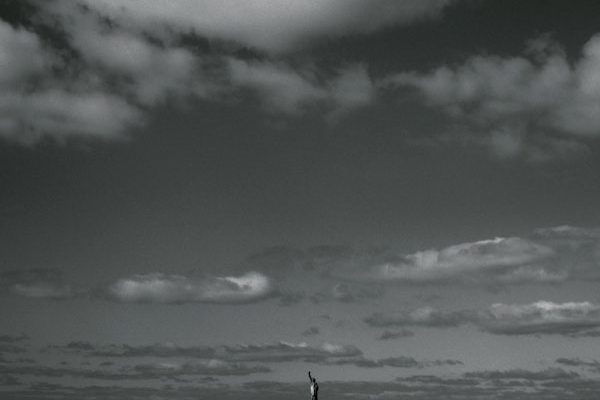 Vijay Iyer is best known as one of the foremost academics in modern music, but he is much more than that. He makes wonderful, heartfelt, and emotionally intelligent music of his own, and the New York Times has lauded him as a “social conscience, multimedia collaborator, system builder, rhapsodist, historical thinker and multicultural gateway.” Iyer is a musician for whom art and politics are always intertwined in a dialogue, something that was especially true during the Trump presidency. On Uneasy, he plays jazz piano alongside Boston based drummer Tyshawn Sorey and bassist Linda May Han Oh. The trio are not only at the top of their game on this album, but they also seem to be a natural fit. The three knew each other for years, but only began playing together in 2019. Nonetheless, one would think they had been playing as a unit for a very long time because of their obvious chemistry. In fact, Iyer has said that he sees this specific trio as “basically one organism.” After listening to this album, it would be hard to disagree with that description.

The artwork for Uneasy is a striking black and white photograph of a distant and blurry Statue of Liberty obscured by clouds. Iyer felt attracted to the ambivalence and haziness the image evokes, calling it both a “looming prideful symbol” and a “rejected figure.” It’s a fitting image for the album, considering Iyer’s lifelong devotion to expressing solidarity with marginalized voices. The album begins with “Children of Flint,” referring to the ongoing water crisis in Michigan. It’s followed by “Combat Breathing” which was composed after the death of Eric Garner in 2014 amidst Black Lives Matter protests. The album’s title track originally alluded to sociopolitical tensions during President Obama’s presidency, which have only heightened over the past few years.

The music itself is full of tension, adeptly matching the uneasiness of our times. It features some of the most beautiful piano playing I’ve ever heard–full of pulsing glissandi and emotion. For me, the album’s highlight is “Night and Day” because Oh and Sorey’s abilities really shine on this track. Personally, I thoroughly enjoyed this album and found that it left me in a contemplative, uplifted mood. Most of the songs on the album are over five minutes long with the exception of “Augury,” and each of them take the listener on a mini-journey. Listeners will find themselves hooked the entire time because the songs are all sonically exciting–there are hardly any dull moments throughout the album. Uneasy is an ideal listen for a rainy, gloomy day when all you want to do is curl up by a fireplace and be lost in your own thoughts. In general, jazz is quite an underrated and neglected genre, so if you’re looking to delve into it, Uneasy is a great starting point.