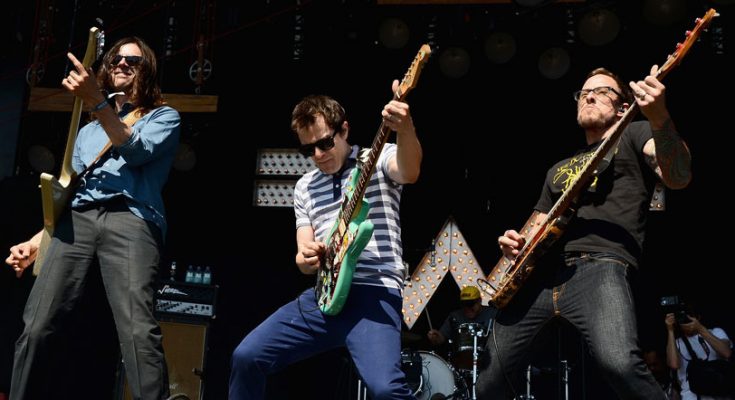 Once upon a time, Weezer was a small L.A. based band on the cusp of releasing their first album, performing their song “Susanne” as a barbershop quartet for David Geffen. Last week, they performed as a barbershop quartet again, this time the song “Buddy Holly” to a sold out crowd of over 7,000 fans on the St. Louis leg of their Weezer / Pixies tour. That night, it seemed the band had come full circle; old and new fans stood to sing along as lead singer Rivers Cuomo shouted “C’mon, let your guard down, this is a Weezer show!” Weezer and their two opening acts put on a show that the crowd won’t soon forget.

Basement, hailing from Ipswich, United Kingdom, was the first act of the night. The five-piece band’s grunge sound brought a house-show feel to the big arena. Performing hits such as “Whole” and “Be Here Now,” Basement showed that they can hold their own in a larger venue while keeping the Brit-rock sound their fans know and love.

Pixies was up next. A band that Kurt Cobain himself admitted he was just “trying to rip off,” I knew I was in for a good show. Their set was polished, and they have their unique dynamics down to a science. This set was where the audience really began to come together, with lead guitarist Joey Santiago pumping up the crowd with his phenomenal guitar solo during “Vamos.”

Weezer’s set, the main event, started off with their barbershop quartet version of “Buddy Holly.” As the set began, Cuomo shouted “It’s all good vibes from here on out,” and the band then proceeded to perform one of the best live shows I’ve ever seen. Weezer occupies a place in the music scene somewhere between quirky pop and modern rock, and that became clearer to me as their set progressed. Cuomo, at one point, paddled a makeshift canoe around the audience as he performed acoustic covers from Weezer’s “Teal Album,” including “Stand By Me.”  Covers seemed to be the theme of the night, with the band performing songs by bands from Black Sabbath to TLC.

The evening’s standout moment came during “Say it Ain’t So.” One of the band’s most popular songs, I was prepared for a great rendition, but was blown away by Brian Bell’s guitar live. Not a single person sat throughout the entirety of the set, but this song in particular had the entire crowd head banging along to Cuomo’s soaring vocals as sparks and multicolored lights lit up the stage. Honorable mentions for best performance also go to the acoustic version of “Island in the Sun,” and the final song “Hash Pipe.”

Weezer is a timeless band, one as reliant on the nostalgia of its older fans as it is on the newer fan’s hunger for newer and better music. Through their renditions of their older songs and first performances of newer ones, they showed that they are not on their way out; maybe they are just beginning.