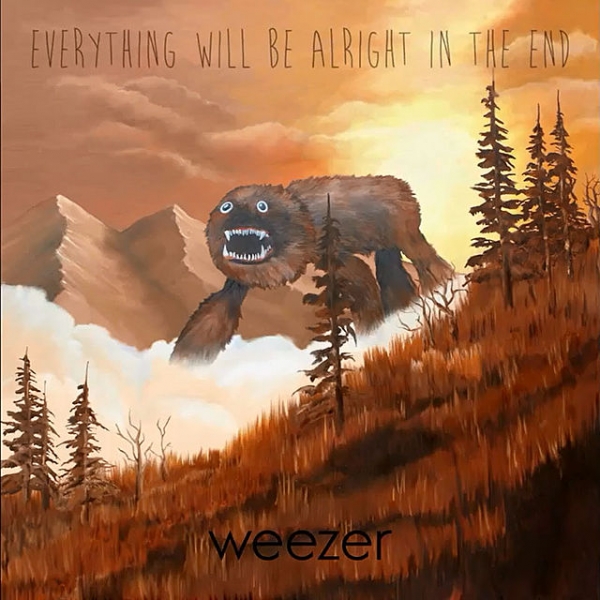 Weezer has been promoting their new album, Everything Will Be Alright in the End, since early March and they performed the single “Back to the Shack” for the first time in early February. This song immediately hits the ears with a hard rocking guitar riff which contrasts the apologetic lyrics. Rivers Cuomo regrets alienating his fans whenever he tried taking Weezer to unfamiliar territory and this album is his attempt to take us “back to the shack”, when Weezer was just a great punk band. The single teased what Everything Will Be Alright in the End is all about: returning to that classic Weezer sound.

The first step the band took towards their goal was hiring producer Ric Ocasek, producer on the classics Blue Album and Green Album. As a result, the new album sounds as bright as their classic albums. There are pop-rock songs like “Lonely Girl” and “Cleopatra” that sound like they fit perfectly on the track list of the Blue Album. The songwriting itself keeps true to the classic punk song tropes. Most songs don’t last much longer than three minutes. The guitars and drums are biting, especially in “Back to the Shack” and the “Futurscope Trilogy” at the end of the album. The latter are the last three tracks of the album and are essentially five minutes of Weezer playing some heavy jam instrumentals.

In the past, the focus of Weezer has been in the vocals, and this album keeps up the tradition. Cuomo is a bit more experimental in this respect. The ear worm “Go Away” features guest vocalist Bethany Cosentino, one half of the band Best Coast. The two vocalists use amazing chemistry to make the verses seem conversational and personal but also really put power in the chorus with harmonies. Cuomo’s singing also shows versatility in the funky “I’ve Had It Up to Here.” He uses his falsetto and a frenetic pace to pump some adrenaline into the listener’s veins.

Other than that and the occasional new instruments (the whistling in “Da Vinci” is pretty catchy) there is lack of progress or innovation from the band. For the most part, using something that’s proven true isn’t something necessarily bad. The lyrics are probably the worst sufferers, since what was once honest and raw can now sometimes feel arrogant or purposely dumbed down thanks to a lack of new-band-innocence. Lyrics like “I thought I had a friend/She was just pretend/She didn’t have a soul/Nothing I could hold” may sound childish to some, but those of us with teenage hearts can relate. This album isn’t a game changer, but if you like the way the game was played during Weezer’s good old days, give this album a listen.