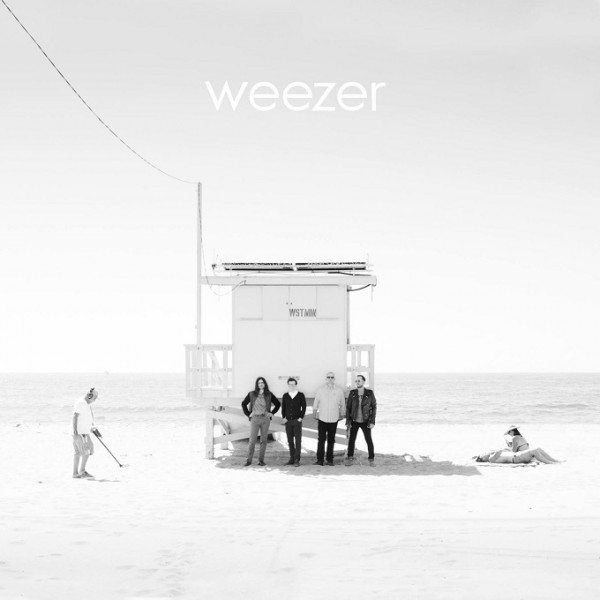 It is hard to even imagine that it has been over twenty years since Weezer first released their well-regarded debut album The Blue Album. Fans from either the Pinkerton (1996) era or The Green Album (2001) era can truthfully admit that they never really kept up with the band since their early millennium releases. Yet, ten studio albums later Rivers Cuomo and company are at it again with their latest release Weezer (The White Album). The choice of name bares resemblance to the timeless classic album of the Beatles. However, it’s definitely no coincidence that it follows the pattern of names of its predecessors such as the red, green, and blue. For all those disappointed Weezer fans expecting to find another flop like Hurley (2010), they can rest assured that The White Album is a delightful surprise of throwbacks and reminds us why we fell in love with a band like Weezer in the first place.

The inspiration of this album comes partly from Rivers’ time hanging out at Venice Beach and, as he admitted, he went on a few Tinder dates to stir up his creative writing process for it. This time around, the band sought to work with Jake Sinclair who was the producer of albums for bands like Fall Out Boy and Panic! At the Disco. Sinclair, himself, was a fan of band from the Pinkerton era and wanted to recapture the kind of vibe from their earlier works.

Their most recent single released to promote the album, “King of the World,” is praise-worthy for its easy going melody that entirely disguises its much darker lyrics. The song includes classic Weezer elements such as use of references and metaphors that allude to actual occurrences of Cuomo’s life and the current events. Not surprisingly, the band chose to include the two previously released tracks “Thank God for Girls” and “Do You Wanna Get High” in the album despite some of the previous reception. Both songs channel Weezer’s trademark nonsensical humors and are the type of songs that continuously grow on you with each listen. This time around they did a better job with picking singles that are almost as great as their well-worn classics.

Perhaps the weakest moment off the album is the very start of it. The opener “California Kids” is almost too much of a cliché and its use of realistic sounds from an actual beach makes it almost unbearable to listen to. It tries too hard to set the scene of this picturesque, almost perfect beach. While the rest of it then becomes just another obvious overdone pop-rock song.

Some of the best moments off the album are with songs like “Jacked Up” and “L.A. Girlz.” While “L.A. Girlz” can be best described as the “anti-ode” to L.A. girls, it is also just the right mixture of a classic Weezer song that possesses this effortlessness. Whereas “Jacked Up” is memorable for its catchy piano part, but it also is the most emotional song of the album. Cuomo clearly is speaking from his own deep personal trauma as he croons “Why do my flowers always die?” Aside from the deeply emotional side of the album, there are also moments of light-heartedness that just seamlessly fit the overall vibe of the album, such as “(Girl We Got A) Good Thing,” which is just a fun song to sing along to.

Weezer has released and made a very solid effort with this new album. Although it has been a long time coming to finally get a Weezer album almost as good as their earlier works, it was worth the wait. As someone who stood by Weezer even through an album like Raditude (2009), I can truthfully say this album is overall the strongest piece of work I have heard from them in a very long time. It is worth the listen and surely will give Weezer some success moving forward.

Key Tracks: “Jacked Up”, King of the World”, “Thank God for Girls”