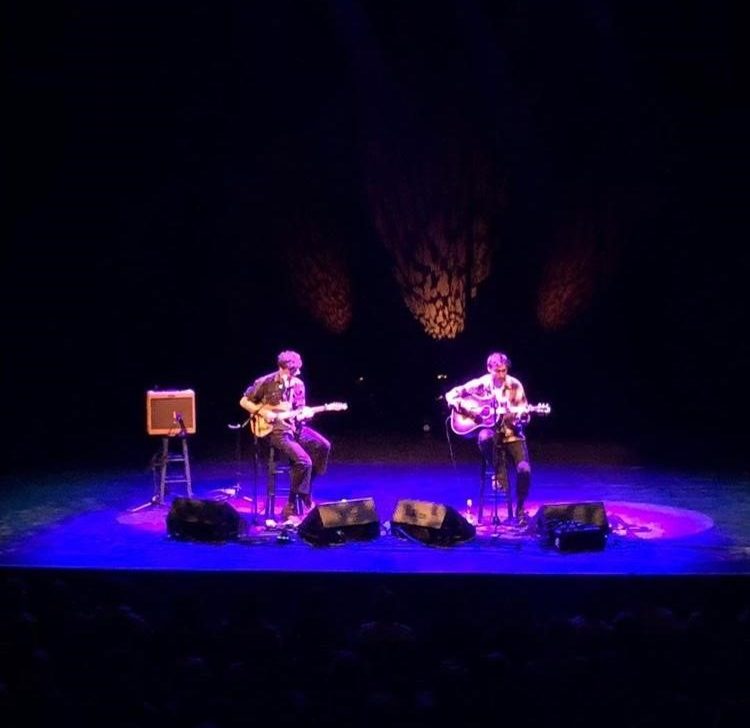 Every year, the Pygmalion Festival brings in excellent musical acts to venues in Champaign-Urbana. One of my personal favorites, Whitney, took the Krannert stage at the Colwell Playhouse on Thursday night. The band originates from the city of Chicago. Normally, the band consists of six members playing instruments ranging from the drums, bass, brass pieces, and the guitar. However, at the Pygmalion Festival, lead singer, Julien Ehrlich, and guitar player, Max Kakacek, were the only two from the band to take the stage. Something I have always loved about Whitney is their soulful brass elements, steady drum beats and layered harmonies; I wondered how this show would pan out without the elements that made me love the band so much in the first place. These concerns washed away as soon as the Whitney Duo started playing.

Ehrlich and Kakacek walked on stage, guitars in hand. I have never experienced a show quite as intimate as this one. The duo was very genuine and honest with the audience. They revealed they hadn’t played a show in a little over a month because they have been working on new music. Based on the looks on their faces, they were definitely feeling a little rusty, but continued to open with “Dave’s Song.” Although the two were visibly tired from what seemed like a long month of writing, the two did not disappoint. Typically, this song has a heavy brass section. The absence of this made me appreciate the electric guitar parts so much more. They followed this with “Polly,” a classic love song. It speaks to being young and in love, and the pain that comes with growing out of that love.

Following these two classics, the duo introduced some of their new work. Because they are still writing, a lot of the song titles are tentative. Of the new material they showed us, I really enjoyed a song they entitled “My Love.” The electric guitar parts were very fun and complex, especially paired with Ehrlich’s vibrato. Following their new stuff, they continued with my personal favorite, “Light Upon the Lake.” The picking on the acoustic guitar, paired with lyrics like, “When old days are gone. Will life get ahead of me?” can’t help but make you feel a little emotional. In addition, they played a crowd favorite, “Golden Days.” Because of the lack of back up, Ehrlich requested we sing along for the end of the song; this instance exemplified the mood of the entire show. The barrier between the audience and stage felt like it was broken down. The soft melodies of this song matched the atmosphere; a large Colwell Playhouse filled about halfway, with lighting resembling an autumn evening, served as the perfect space for listening to the Chicago band.

Whitney provided a unique concert experience for all in attendance. Typically, I feel like there is a level of intimidation between artists and their fans; we hold these people to a higher standard because we listen to their Spotify profiles. However, the Whitney Duo unapologetically revealed their true selves on stage, sharing personal details about writing the album and where their heads were at. Those who witnessed the Whitney Duo in action will not forget the incredible show performed this year at the Pygmalion Festival.