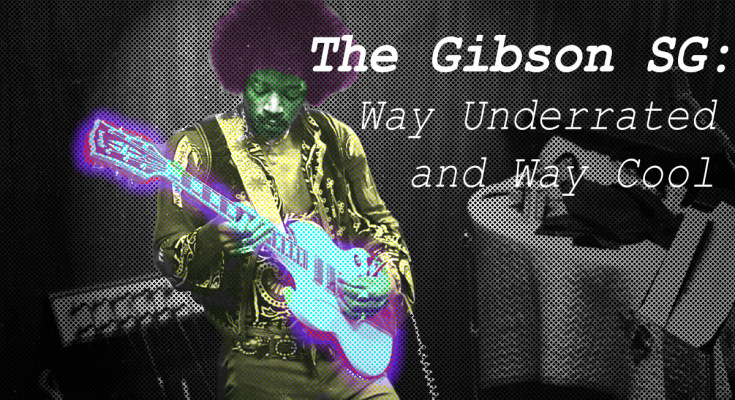 Throughout the years, there have been many iconic guitar models and great players have been known to be very particular about their weapon of choice on stage. Many people are familiar with the Les Paul and the Stratocaster guitar shapes, but one that stands out among the rest for me is the SG. With its devilish horns and straightforward style, I have yet to find anything that plays nearly as nice as an SG.

SG’s were born out of a new marketing direction for Gibson to replace the Les Pauls that weren’t selling in the late 1950’s. In an effort to ride the double cutaway guitar wave, Gibson revamped their Les Pauls to have easier fretboard reachability, lighter weight, and better contours. Thus was born the SG, a shockingly aggressive and modern guitar that broke with tradition of the time.

Throughout the sixties it was a favorite of many rock guitarists, including Jimi Hendrix and Eric Clapton; two guitarists famous for their mastery of the Stratocaster. Though information is sparse about why Hendrix began rocking the SG, it is likely because on a Stratocaster, Jimi would lose access to at least six frets with his playing style. The guitar allowed him almost uninhibited access to the upper frets when he played the guitar left handed. And this doesn’t just apply to Hendrix; of all the guitars I have played, nothing has as smooth and easy access to the upper frets like an SG. Even at the 24th fret, players can wrap their thumb around the top of the fretboard, something players like Hendrix were notorious for. Many legendary players would continue to rock the SG over the years like Angus Young (AC/DC), Frank Zappa, Toni Lommi (Black Sabbath), and Jimi Page (Led Zeppelin).

As the 1980’s rolled around the SG fell out of favor. When Eddie Van Halen announced a new age of rock and metal to the world, everyone had to play a hybrid Stratocaster. This kind of guitar provided all of the advantages of a humbucking guitar like an SG or a Les Paul, but in the body of a Stratocaster which would allow insane divebombs and tremolo tricks that Van Halen became so famous for. Players like Steve Vai created their own take on this guitar with the Ibanez Jem and others. The addition of the Floyd Rose tremolo made this style of guitar almost a must have for players as well. On the other hand is the SG; the hard tailed bridge makes the tension of an SG so much looser than that of a strat making intense note bending a breeze. Combine this with the already mentioned ease of freeboard access and the devilish aesthetic would logically make this guitar the ultimate metal guitar. However, it remained mostly out of the metal scene throughout the 80’s and 90’s.

Unfortunately, for all of its strengths, there are yet a few problems with the SG that were dealbreakers for some players. The heavy neck of the guitar forced the player to support the neck with their left hand as they played, making stage presence akin to a balancing act. Furthermore, some SG’s suffered from neck joint problems that could cause structural issues for the guitar as a whole. And finally, the guitar came without a tremolo (other than a Bigsby tremolo that couldn’t hold a candle to Floyd Rose, making it a deal breaker for many hardcore shredders who needed to dive bomb.

But despite all of the innovation and bells and whistles of Super Strats and other shred guitars with all the bells and whistles, in my eyes nothing can quite live up to an SG. At the end of the day for me, I would still rather shred on an SG than a Stratocaster any day of the week. And today the problems that many 90’s metal guitarists faced with the SG have been fixed. Newer SG models (even the ones made in China) have excellent neck construction and are much more balanced than the vintage ones that suffered from neck dive. Furthermore, there are a plethora of new options for SG tremolo bridges that can do divebombs, like the Floyd Rose FRX or the Stetsbar tremolo. With this, hopefully one day we can see a resurgence of this great guitar in metal and rock music.