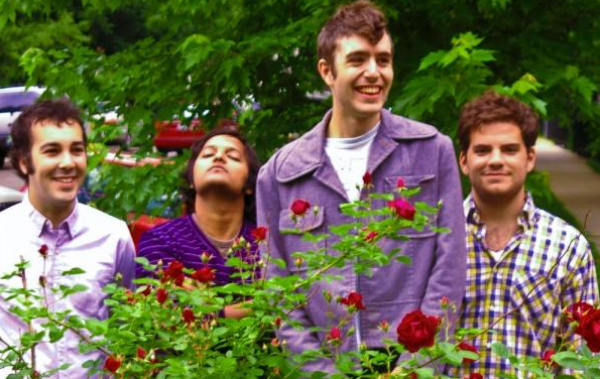 Ezra Furman had a wild and crazy and equally amazing set at The High Dive last night. Furman talked to the crowd between songs, and he said some damn hilarious things. His commentary and his music just kept effortlessly drawing everyone closer and closer to the stage.
And it’s a good thing that he brought us closer to the stage because, up until this headliner hit the stage, everyone at The High Dive was pretty subdued. Not to say that the openers were weak performers, but no one seemed eager to hop around like crazy. This was probably the case because the first act was so relaxing and comforting that everyone was perfectly content to just sit back and watch the performance.
This first performance was done by one half of The Divide (perviously known as The Great Divide), the band’s vocalist, Ben, and guitarist, Will, performed as a duo. But when I say duo, I really mean two guys that can play every instrument in the world. There were acoustic guitars, mandolins, banjos and almost any stringed instrument you could imagine. (Not literally, but there was quite a wide array of stringed things.) Coupled with Ben’s kinda folksy, kinda country twang-filled voice, these tunes were purely nostalgic and comfortable. Listening to this duo was nice and easy, and it was a perfect way to segue from regular life to “concert mode.”
Once Vermont-based Chamberlin hit the stage, energy was a little higher in the crowd. The fact that these guys were all dressed in totally different styles of attire definitely added to the energy boost. No one could tell what was in store just by lookin’ at ’em. And, frankly, no one knew what was gonna happen once they started playing either, because these guys were diverse to the max. Every single song could have been from a totally different album, with a cover of Kanye West’s “Lost in the World,” folksy-chill tunes and some straight rock n’ roll songs coupled with a killer synth, these guys had something for everyone. Plus frontman Mark Daly has some vocal chords in him; his range was absolutely ridiculous. (Ryan Groff anyone?) Before this performance, I thought they were strictly a wistful, folksy type of group, but clearly they proved me wrong. Like I said, diverse to the max.
It wasn’t until the stage was being set for Furman that the venue really started buzzing, and Ezra Furman put on a buzz-worthy performance. They performed a bunch of music off their latest album Mysterious Power and, all the while, these guys were brimming with excitement and verve. When the audience started singing along to some of their faves, Furman’s face lit up with joy. He happily proclaimed that, “tiny, Tuesday-night shows are [his] favorite. …. It’s like [they] can play a song for every two people in the crowd.”
Tuesday night at The High Dive might’ve had a slow start but, then again, it was a Tuesday night. By the end of the evening, Ezra Furman had a riled up crowd that was following their every dance move.