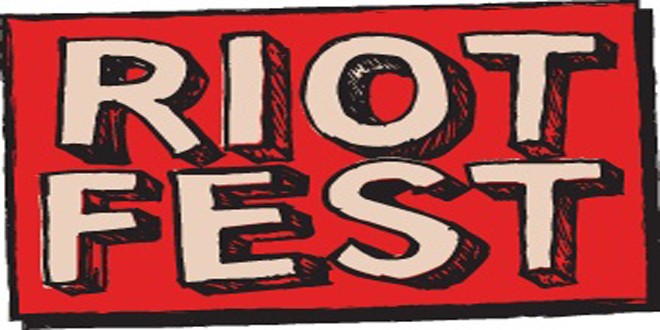 The weather on Saturday was a major improvement from the frigid drizzle from the previous day. With the sun shining and a blue sky, I made my way to Humboldt Park for day 2 in hopes of catching the Pizza Underground. If you’ve never heard of them, they’re best known for the fact that Macaulay Culkin is in the band, and that they cover Velvet Underground songs but replace the subject matter with pizza related words. They consistently get booed off stage, and that sounds like something I’d love to see. Unfortunately, only one entrance gate was open for the entire park, creating a line that took me nearly an hour to get halfway through before the rest of the gates opened and the line turned into an amoeba. By the time I got in, I had missed The Pizza Underground and Wavves’ sets.

The first show that I made it to was RX Bandits. This band is a ten-year sonic metamorphosis, starting off originally as a ska punk outfit, then gradually evolving through more progressive and hardcore elements. The product as of now is a masterful blend of fast-paced post and progressive rock with very tasteful hints to their ska punk days. With the much improved weather, the crowd was really excited and moving, creating a fantastic atmosphere for the band to feed off of. Their stage presence was great, and the ways in which they expanded upon the songs from their 2014 album Gemini, Her Majesty really drew me in. I was pleasantly blown away by their set.

As a high school band nerd, I was always looking for ways to play music outside of class, and starting a band was the obvious answer. Seeing as how many of my friends were also high school band nerds who played horns, the formula was perfect for starting a ska punk band, which is exactly why seeing Streetlight Manifesto was one of the most nostalgic shows of the weekend. Having looked up to them and ripped off their music all throughout my youth, it was nice getting to finally see them live. The horn section was remarkably tight and their energy was infectious. In typical ska punk form, the crowd had opened a large dancing circle which complimented the upbeat music perfectly.

Saosin formed in 2003 as a post hardcore band that featured Anthony Green at the helm on vocals. After the release of their first EP, Green left the group and eventually formed Circa Survive. Though the band has been fairly successful since then, many fans still consider Green’s involvement as some their best work. As such, Green’s reunion with the band was highly anticipated. Though Green sings in both Circa Survive and Saosin, the similarities don’t go much further than that. Saosin offers a much heavier and dirtier sound, giving Green’s more aggressive screaming a fitting home. The energy on stage was spectacular, and it was as if the band had never been apart. Despite a great musical performance, Green’s on stage behavior left me somewhat confused. In between songs, he repeatedly beckoned a person in a dog suit to climb on stage (“come on, little doggy!”) before threatening to kick the fan out. At one point he offered $15,000 to anyone who could make it on stage. Before introducing the last song, he questioned why people were listening to their set instead of Die Antwoord, who was playing across the park. I decided to take his advice and catch some of Die Antwoord’s set instead.

I had pretty high expectations for this South African rap duo. Their style and sound is incredibly unique, between the unusual flow of Watkin Tudor Jones (aka Ninja) and the cartoonishly-shrill voice of Anri du Toit (Yolandi Vi$$er). The first thing I noticed as I approached the stage was the pair of dancers, dressed in the masked-outfits featured in their music video for single, “Fatty Boom Boom”. Throughout the entire set, the dancers were going on and off stage, changing outfits each time they returned. The same went for the two MCs, giving the whole performance a very choreographed feel. In addition, the people around me speculated whether or not Yolandi was lip-syncing her parts. While these factors together took away some of the organic nature of the performance, the killer sound and energy coming from the stage was undeniable, making for a wholly successful set.

While I do like a fair amount of hip-hop I have to admit that I haven’t spent much time listening to Wu-Tang Clan. I’m well aware of the all-star group’s fame, and I’m familiar with their biggest hits, so I was looking forward to experiencing them live in hopes of finding some good reasons to finally pursue them further. Unfortunately their performance was lackluster. Even with the absence of Method Man (so I was told), the stage looked crowded, and the group vocals during verses were much too loud. The collective also didn’t seem to be very excited about the performance in the face of a fairly energetic crowd. A tasteful sample of The Beatles’ song “Come Together” made for a strong finish to the set, leaving me a bit more satisfied.

The Flaming Lips is a group that I’ve been hoping to see for a few years now. I’ve seen videos and photos, and heard accounts of their larger-than-life performances. Stories of Wayne Coyne walking over the crowd in a human-sized inflatable hamster-ball during spectacular light shows gave me very high hopes for a great show. The stage was set with a huge multi-paneled LED display, while LED light ropes hung from the top of the stage and down the wings like a futuristic tentacled curtain. Just before the music began, a pair of people in 10-foot-tall mushroom outfits were led on to either end of the stage, while a two-person rainbow suit took up the rear. The set opened with “The Abandoned Hospital Ship”, featuring a sparse texture of only piano and vocals, leading to a huge build up. When the full band finally joined, the sound was immense. The lights burst in rainbow colors, and confetti cannons fired off above our heads. The remarkable display lasted for about one second before all the power cut, leaving the stage in the dark and the audience in a bewildered chatter. After a few minutes of chaos on stage, the power was back on and the band tried again, playing a great set. Near the end of their scheduled time, Coyne announced that The National who were set to follow had run into a travel mishap and would be starting a bit later. After a fair amount of stalling, the band played a few more songs, ending with a tremendously intense cover of The Beatles’ classic, “Lucy in the Sky with Diamonds”. Instead of waiting for the National to arrive, I decided to call it a day.