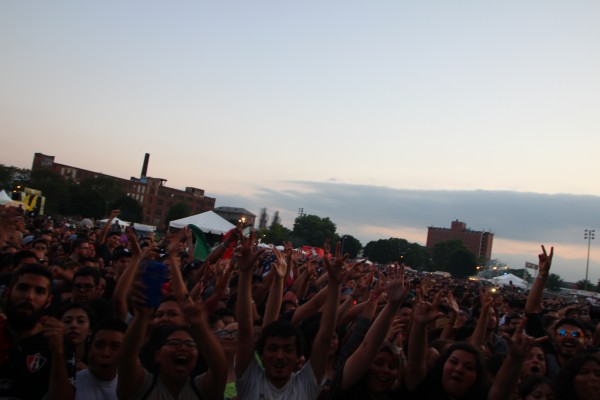 All Photos by Zachary Schroeder

This past weekend (Friday, July 10 through Sunday, July 12) Addams/Medill Park, just north of the Pilsen neighborhood in Chicago, hosted the first ever Ruido Fest. Festival promoters marketed the event as one designed to showcase Latin music spanning genres and generations, with an emphasis on Latin alternative rock and punk. The festival has already been acknowledged as a first of its kind, following the structural example set by other outdoor music festivals, like Lollapalooza, Pitchfork, and Riot Fest, while giving voice to performers who receive enthusiastic receptions in Chicago but are typically snubbed by larger, more established events. Though the dust has yet to fully settle, Ruido Fest has been lauded by multiple publications for filling a glaring void in the music festival circuit, and for filling it so successfully and satisfyingly.

Before reviewing some of the most impressive acts, I think it is important to acknowledge two key points related to how I (and surely other attendees) experienced the inaugural festival. First, though Ruido Fest was produced by experienced professionals in the music industry, and got by with help from Riot Fest promoters, the overall smoothness and precision of every aspect of the festival was truly impressive considering the fact that this was its first year. There were three stages—Demon Stage, Santo Stage, and Mil Mascaras Stage—planted in a triangle from opposing points in the park. Despite a lack of natural barriers between each stage, sound bleeding was not much of a problem; music from multiple stages could be heard in the middle of the park, but standing in front of any particular stage meant becoming sucked into that one performance. Bathroom facilities were dependable, there was a variety of food and drink options (all offering, compared with other Chicago events, perfectly reasonable prices), and festival coordinators somehow arranged a deal with Coca-Cola which resulted in free soda throughout all three days. In other words, the festival never left people wanting, greatly reducing the chance of crankiness, festival fatigue, or feelings of buyer’s remorse. This reality made it feel almost unbelievable that the festival had never been held before. 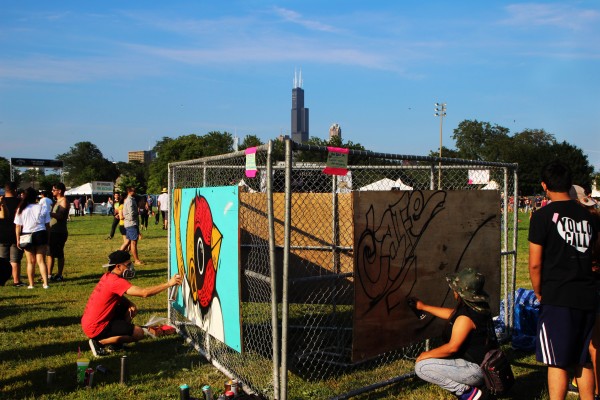 The second thing I would like to point out is that, though I actively seek out new music on a regular basis, Latin alternative and punk are definitely in my cultural blindspot. This fact is worth noting because, though I had a working knowledge of exactly one scheduled band prior to entering Ruido Fest, I was at no time left to feel like an interloper or some weird outsider. The sense of community was palpable all three days, even to people with little previous awareness of a Latin Alternative community even existing. The welcoming vibe, and relaxed atmosphere made for a thoroughly pleasant festival experience, which I truly hope people remember as Ruido Fest works to become an annual event.

Friday introduced the musical diversity of the festival’s performers, beginning with the danceable but dense beats of Maria y José, who mixed familiar house music themes with a worldly variety of rhythms and percussive recordings, seamlessly moving from fast-paced tunes into dampened respites. Ceci Bastida was next to take the stage, with a performance laced with rude social awakenings and an aggressive reclaiming of the value of accepting an individual’s humanity and worth, regardless of man-made borders and greed-induced ideas of property and entitlement. Her messages were enhanced with prerecorded audio clips, which often introduced or concluded songs, and intensified the effects created by the abundance of instrumentalists on stage. 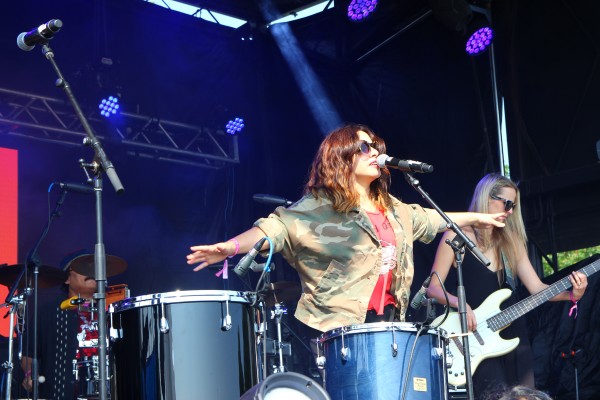 Ceci Bastida was followed by the band I was most excited to see: AJ Davila y Terror Amor. Davila took stage in a denim jacket, through which the brace around his lower back was visible, comically poking out. Early in the set, he joked about the brace, saying he messed up his back falling down the stairs. Though clearly working with a disadvantage, Davila put a remarkable amount of energy and punkish attitude into the performance, screeching out lyrics over the garage rock provided by Terror Amor, with the microphone in one hand and a beer in the other through most of the show. 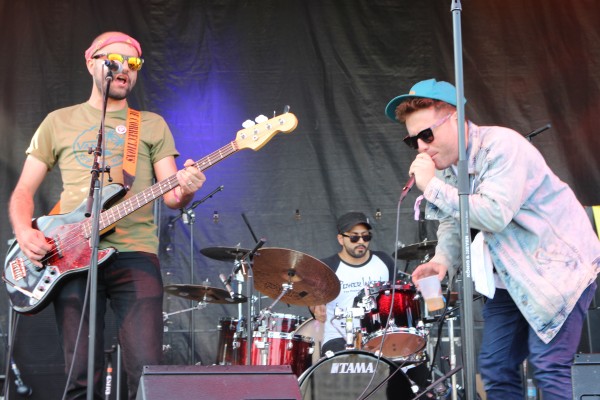 Banda de Turistas changed the pace created by Davila, providing lighter, more feel-good music perfect for a beautiful summer day. Though their set came with a much more relaxed tone, the band members were treated as young heartthrobs, welcomed with enthusiastic screams and almost uniform smiles and excitement from the crowd. 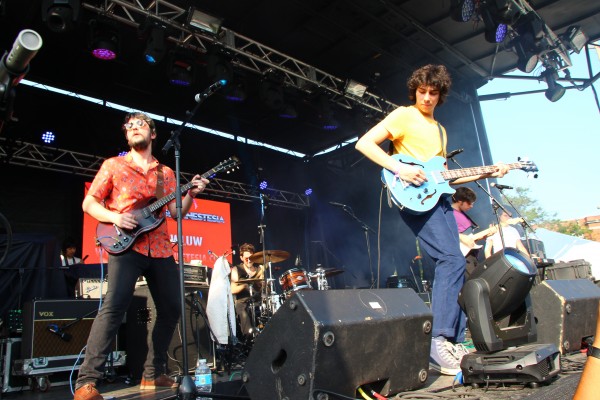 The rest of the evening progressed with continued diversity in acts, between the thrashing hardcore relentlessness of the duo Cardiel, to the softer, pop-incorporating Dënver, and the bright, highly danceable Compass: MIS + Toy Selectah. 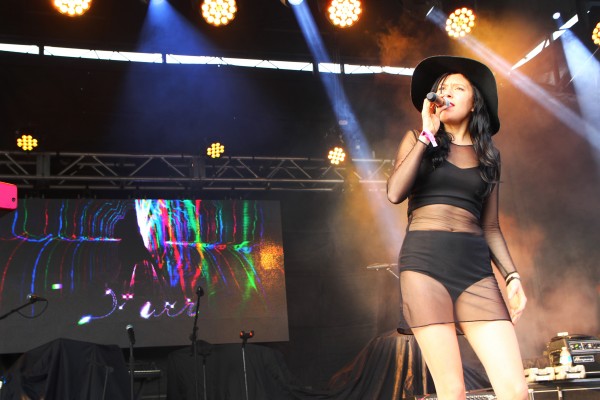 Zoe wrapped things up for the night, walking onto stage to the sounds of people chanting their name. Between lighting tricks and a style that seems most closely related to the early 2000s work of Coldplay, U2, and maybe Radiohead’s more relaxed stuff, they provided a sense of familiarity and comfort in a day filled with pushed limits, musically speaking.

Saturday’s schedule followed in the same vein as the day before, with acts appealing to an older audience, groups following a more avant garde punk aesthetic, and plenty of feel-good summer party music in between. Early standouts were Rebel Cats, who injected a loud combination of rockabilly and beach tones into the afternoon, even blasting out a caffeinated rendition of the classic “Wipeout” (just when I thought that song couldn’t be any more energetic). They were leveled out by the more modern alternative group Pastilla, which performed with a rich array of sounds, creating music that was easy to nod along with, but also broke out into more insistent rock thrashing at times. They were like the agreeable auditory calm before the storm that was Descartes a Kant, who seemed insistent on turning punk and screamo into performance art in front of a part-enthusiastic, part-downright confused crowd. Hilariously, they performed on the Mil Mascaras stage, which faced a Lucha Libre ring, so they fought with their crowd’s existing notions of what a performance could be while masked wrestlers acted out a physical fight.

Jessy Bulbo was the next outstanding act, channeling the likes of tUnE-yArDs in an energetic performance spanning her discography. Later in the evening, as the end of the day neared, Silverio provided the best competition for Descartes a Kant in the title of “weirdest performance of the festival.” His main performance strategy seemed to be gaining support by openly insulting his audience, not really in a condescending way, but in a way that invited the audience to insult him back. He created a pseudo-aggressive atmosphere, where people could be crude, throw stuff on stage, and liberally present their middle fingers. Most appropriately, it was during his set that I spotted the first condom balloon of the weekend. MOLOTOV closed the night for a thrilled, filled-out audience. Though they were one of the very few acts to take stage a little after the scheduled start time, they made up for the delay by jumping right into exciting, adrenalin-inducing crowd favorites, simultaneously rounding out the night and creating momentum to carry the festival into its final day.

While many acts throughout the festival inspired carefree dance moves from much of the crowd, several Sunday acts succeeded in getting just about every single person in the audience to dance along. The first was Dos Santos Anti-Beat Orchestra, whose performance was largely instrumental, but which inspired such a feel-good vibe that the show never got tiring. Even though they attracted a respectable crowd, people in the front section allowed for plenty of dancing space. 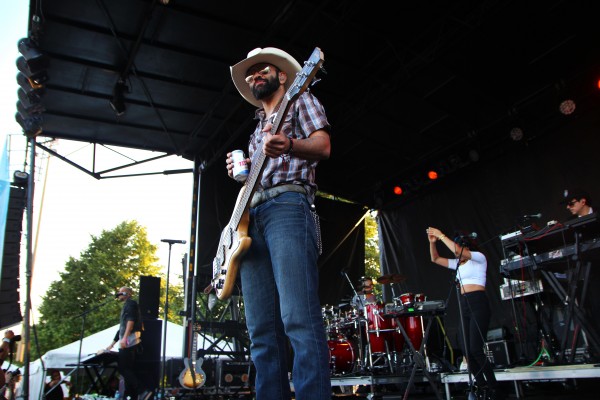 Though more of a band to watch and listen to, Carmen Costa was the next notable act, consisting of the same core members as Terror Amor. AJ Davila even jumped on stage to sing along with a couple of songs, but for most of the show could be seen in the crowd, enjoying the performance alongside other artists from the weekend, like members of Dënver. Carmen Costa, though entertaining in their own way, allowed for a much needed cooling period before one of the wildest acts of the day, Los Rakas. The Bay Area rappers offered one of the most versatile hip hop performances I have ever witnessed, and got the entire crowd into it with group chants and hand waving that, for once, didn’t feel forced or annoying. They used up their entire time slot, but there was still a sense of disappointment in the crowd that the group couldn’t go on longer. 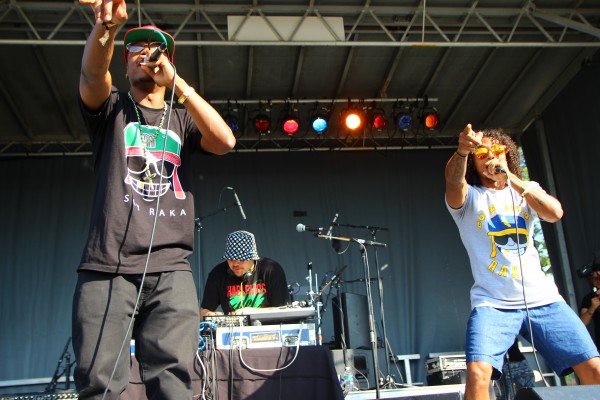 Later in the evening, Kinky gave those not already waiting across the park for Café Tacvba another opportunity to dance, but to much more light-hearted music. They struck a difficult balance, playing music that could either be totally absorbed and focused on right then and there, or could also be enjoyed from a distance, mid-conversation, while regrouping before the headliner. In other words, their music could be received however anyone in the audience wanted to receive it, either whole-heartedly or at arm’s length. Café Tacvba closed the festival with a lively and continuously moving show. Though they clearly had a loyal following, I was honestly shocked to see that at least eighty percent of the crowd knew every single word to every song (and their songs have A LOT of fast-moving lyrics). 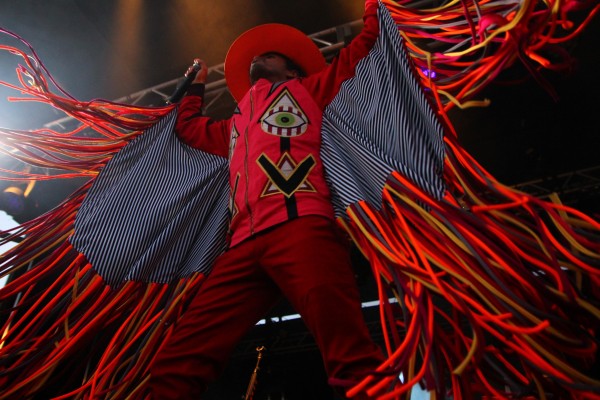 Café Tacvba embodied the strengths of the festival, creating an incredibly fun atmosphere for people of all types and ages, while also filling a clear void in the world of music festivals. Thus they were the most appropriate closing act for the new festival, and they hopefully helped to cement the fate of Ruido Fest as an event that will return. 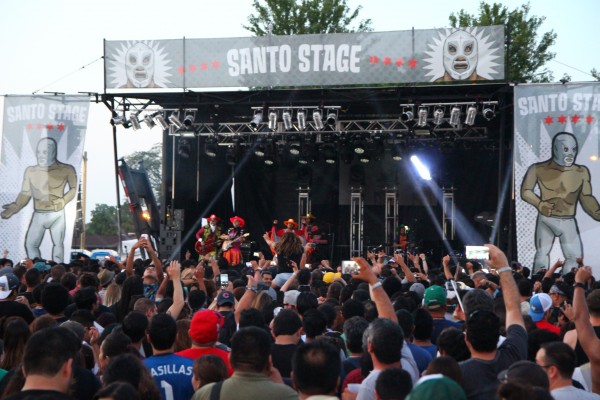