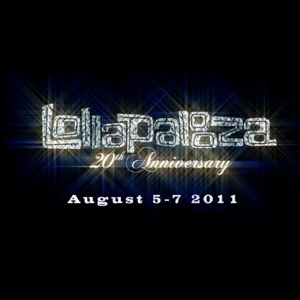 Saturday, Day 2 of 3. Make sure to check back for photos!

Fitz and the Tantrums [Music Unlimited, 2:30-3:30 PM]
Coming on the heels of a short sneeze of rain, Fitz and the Tantrums greeted a huge, dripping crowd just as the sun re-emerged. This being their first Lollapalooza, the band was absolutely bursting with energy, and singers Michael “Fitz” Fitzpatrick and Noelle Scaggs battled for control of the sound system for the first few songs before a proper medium was reached. After that, though, the performance was recording-quality, and went through just about all of their current album, and included covers of the Raconteurs’ “Steady as She Goes” and the Eurythmics’ “Sweet Dreams,” the second of which is available on their website. Much of the crowd interaction was left to Miss Scaggs, and rightfully so; while Fitz can belt out the chorus and wear the hell out of a suit with his skinny guy dance moves, Noelle’s ever-present tambourine and harmonious “oohs” and “aahs” lend themselves perfectly to yelling out directions to the audience. Without question, the highlight of the performance was the dance party, then collective curling-up-into-a-tiny-ball-and-waiting-to-jump-back-up, then dance party again of the final song: “Moneygrabber”. If I could have simply watched them perform on loop for the rest of the day, I would have. – Bill Hinderman

Black Lips [Playstation, 3:00-4:00 PM]
You might ask yourself “what is flower punk?” one day and apparently here is the answer: Black Lips are flower punk. Self-proclaimed flower punk band aside, these guys played some dirty rock ‘n roll. They’re gritty, they’re bluesy and even a little doo-wopy. When the guys played “O Katrina!” off of Good Bad Not Evil myself and the crowd went nuts (it was featured in Scott Pilgrim vs the World and all my fellow dorks will be with me when I say I loved that film). The four current members are known for their crazy antics during shows and Lolla was no exception. Cole Alexander (vocals, guitar) threw a few beers into the crowd at one point saying, “I’m pretty drunk so to avoid getting into trouble I’ll give these away but only if you have an I.D.” Anything throw-able that was on stage the guys threw at the crowd: beers, toilet paper, every thing. When Black Lips played “Bad Kids” not only was it appropriate but it was probably the most genuine bad-ass moment of my year (if not my LIFE). The dudes were likeable AND melt-your-face-off good. – Natalie Wontorczyk

The Drums [Google+, 4:45-5:30 PM]
I do have a slight infatuation with The Drums ever since seeing them play Bonnaroo earlier this summer, and sure it may not be totally warranted. But, in the grand scheme of music they’re babies and I know that they can grow into beautiful rock gods!! They released their self-titled debut album in 2010 and although they haven’t yet figured out how to make their stage presence a little more…memorable, they’re well on their way. Front-man Jonathan Pierce has the indie swagger to carry The Drums very far and as the majority of girls standing around me during their set kept saying “he’s seriously SO KEWT!” Regardless, Pierce is the perfect lead for the guitar pop group. Their set included most of the fan favorites off of The Drums from “Best Friend” to my personal favorite “Down By The Water”. The boys also played their new single “Money”, a fast paced, feel good number that had every body swinging to the beat. I do have mixed feelings about the band not playing “Let’s Go Surfing”. It’s their most successful single and there were grumblings from fans after their set that they didn’t play “the surf song”. I kind of admire them putting it to rest (at least for now) before they and their fans get too sick of it. Or, maybe I’m just in lurve. – Natalie Wontorczyk

Local Natives [Sony, 5:30-6:30 PM]
Pristine three-part harmonies, rattling percussion and an overall presentation that’s almost ethereal. Local Natives drew a massive crowd that was unexpected, but well deserved. Lead singer Taylor Rice was so gracious, explaining to the audience they were the biggest gathering of people they had ever played for. The crowd seemed to expect them to cover “Warning Sign” by Talking Heads and they delivered. Then, they got into more songs from their debut release from last year’s Gorilla Manor, highlights definitely including “Wide Eyes”, “Shape Shifter” and of course, the beautiful and sorrowful, “Airplanes”. Their lyrics are so full of discovery and emotion, it’s hard not to close your eyes and visualize the words. They managed to make the audience sway and throw their hands up in the air without any cues, almost like a spiritual experience. The finale, “Sun Hands” couldn’t have ended a better set. Before leaving the stage, Rice snapped a photo of the crowd, capturing an amazing moment right at the end. – Courtney Yuen

Cee-Lo Green [Music Unlimited, 6:30-7:30 PM]
I could not be more disappointed if I tried. After running to a good amount of Gnarls Barkley in high school, and loving every note of Cee-Lo’s “The Lady Killer,” he completely phoned it in today. While a search of some performances would show than the guy has a penchant for wild outfits on stage (the band all dressed as Mad Max characters), this show could not have fit the bill of “style over substance” any better. To wit: in the five songs I stayed for, I heard four more started, played for a few seconds, then aborted. I still love Cee-Lo’s music, and…reality show personality-ing, but this is certainly not a show I’d see live again. – Bill Hinderman

Lykke Li [Google+, 7:15-8:15 PM]
Trying to squeeze through the crowd to see this Swedish sweetie was truly a difficult task. Everyone waited for Lykke Li as the fog machines were creating a misty-air throughout the shaded field at the Google + stage. She arrived on stage to a monstrous applause, looking beautiful as always. All of them were wearing black, and almost lurked around the stage with a seductive stroll the entire set. The crowd was completely enveloped in her. Her voice rang out so deep and rich; it all seemed so effortless for her. The audience couldn’t seem to ignore the thumping, almost tribal beat of the drums, as everyone was dancing and stomping to the beat. “I Follow Rivers” gained the most attention, everyone singing along with Lykke’s soulful voice. The unique mixture of elements –synthesizers, drums, trumpets, strings– Lykke includes in her compositions kept the audience intently listening the entire time. Rather, her obscurity didn’t turn people away; it made them want more. This was definitely a set you didn’t leave early. – Courtney Yuen

My Morning Jacket [Bud Light, 8:00-10:00 PM]
If you have not heard/seen/read about MMJ’s phenomanal live shows then you really should (see:Bonnaroo Recap). Formed in 1998 these guys have it together. Their rock jams are like a well-oiled machine, and I say “jams” because they really are long jammin’ versions of their regular tunes. MMJ is the kind of band made to perform in huge outdoor venues. Front-man Jim James is larger than life: his long curly hair, his long beard, the cape he sometimes dons. His presence alone fills up any arena, and that’s without the other amazing four band members. Carl Broemel on guitar gives me chills and when their set began with “Victory Dance” and then melted right into “Circuital” I knew I’d be holding my breath the rest of the show. With their latest album’s cover art behind them, MMJ captivated the massive crowd without over the top gimmicks or manufactured beats. My Morning Jacket simply plays really great rock music. “Holdin’ On To Black Metal” just about rounded off the set and I might have to go out on a limb here and say that it’s the best live tune I’ve ever heard. – Natalie Wontorczyk