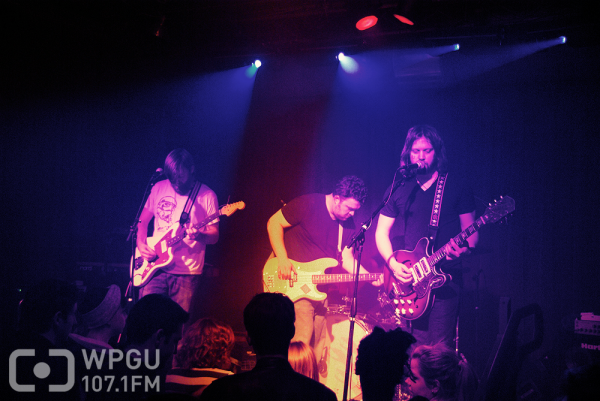 Saturday night, while absolutely freezing, was a hot night for music in Champaign-Urbana (most notably at Cowboy Monkey in downtown).
Folded Bones started the night out with their three-piece band. They got the night going by playing a mixture of originals and covers, including classic, and my personal favorite, by Joy Division. Their bluesy sound set up the perfect atmosphere for the night.
Midstress, having played twice that weekend, still managed to bring out the upbeat punk they’re known for and prepped everyone for what was to come….
And that would be White Mystery, which was an especially high point of the evening. The two-piece, brother-sister duo had a set filled with explosive energy, and they brought allure to the night with their long ringlets of super sexy red locks, American flag apparel and (p)leather pants. As a mere duo, White Mystery put on a show that had the sound of a full band.
As per usual, the Dirty Feathers brought the charm and the house down playing their psychedelic rock tunes. Had I not been to this show, I would have been bellyachin’ for the rest of the month hearing the fantastic reviews from the night.