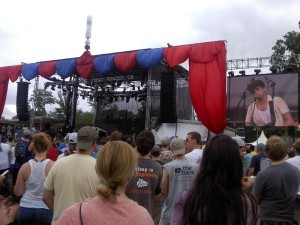 After a jam packed evening featuring Alice Cooper and Skrillex, whose drops could still be heard well beyond four o’ clock in the morning, getting up for Bonnaroo Day 4 was quite the task. A task that was made worth it, as Delta Spirit took to the Which Stage. They say the early bird gets the worm; well, at festivals the same is true. Those who arrived on time for the set were encouraged to travel into the pit before the stage, getting up close and personal with the boys from California. Delta Spirit kicked off the high energy set with “Empty House” off of their most recent self-titled album released this past March. Matthew Vasquez’s vocals were unmistakable, bellowing through the speakers and into the bones of a good number of ‘Rooians who gathered for the early set. With “People C’Mon,” “Time Bomb,” and “Bushwick Blues,” it wasn’t long before the crowd shook off their exhaustion. It was a raw high energy fueled set that only accentuated by Vasquez’s ability to belt. It was unfiltered. It was Delta Spirit.

The smell of sweat, love, and excitement is never stronger than on the fourth day of Bonnaroo. By this point, the majority of festival goers haven’t showered in days, perspired sweat by the gallons, and smell a little off, but those are just some of the things that bond us. That and music. I have never felt more unified to my fellow ‘Rooians  than at Grouplove’s show at This Tent. We were all packed in like sardines, trying to get as close to the stage as possible. Mild discomfort was replaced by pure excitement and adrenaline as an identifying frame with “GROUPLOVE” written in white was hoisted into the air. Screams from the crowd built up into a roar as the members of Grouplove energetically took to the stage. Guitarist and vocalist, Christian Zucconi, was the first to take to the microphone, “Let’s melt our faces together on this Sunday!” he yelled to the crowd who then went ballistic. The performance was intense. At no one point did the members on stage stop twirling, head banging, or running around. The energy was an entity to its own in This Tent, fueled by both the members on stage and those in the crowd, it was a perpetual give and take that left everyone feeling completely satisfied. The set relied heavily on their studio release Never Trust a Happy Song, performing, among others,  “Lovely Cup,” which had everyone in the crowd jumping in unison as one and “Spun,” which featured Andrew Wessen on the electric ukulele (yes, that is a real thing). There was also Grouplove’s cover of Whitney Houston’s “I Wanna Dance With Somebody,” near the end of their set which had everyone singing along, but nothing was quite like their electric performances of “Tongue Tied” and “Colours.” As a handful of audience members surfed through the crowd, it was made apparent that this set could not have been any better.

After hearing “Heavy Abacus” and “Whirring” from The Joy Formidable, they became not only a band that I wanted to see at Bonnaroo, but a band I had to see at Bonnaroo. Ritzy Bryan is the surprisingly small lead vocalist with bright blond hair whose melodies and tunes hauntingly stay with you. There is an enchanting sense of rock and distortion. The speakers were turned up to 11 during their performance which made it difficult to think about much else than the music at hand. The set highlights included, “I Don’t Want to See You Like This” and of course “Heavy Abacus” and “Whirring.” Though I was impressed by their hard, almost distorted live performance of the songs from The Big Roar, I was disappointed by the length of the show. During the set, Bryan excitedly revealed that they had just finished up their new album. However it would appear they are holding this album close to the chest, not playing much new material. Whether it was new material or covers, it would have been nice to have had something fill the void.

An eager crowd overflowed from the That Tent long before the members of fun. stepped foot onto the stage.  The letters F-U-N lined the back curtain of the stage, as rectangular LED panels filled the space left by the letters. Fun. put on a fantastic that had people singing, clapping along, slow dancing, and just feeling good. It wasn’t until after “Light a Roman Candle with Me” that lead singer, Nate Ruess, addressed the audience, “GOOD FUCKING AFTERNOON FELLOW BONNAROOIANS! How are the games this evening? Oh, this is so awesome. I’m going to try and wipe this smile off my face. Thank you for coming! We are fun. Sing along!” And off they went into “All Alone,” later followed by a sing-a-long version of “At Least I’m Not as Sad (As I Used to Be).” They included a cover of Paul Simon’s “Me and Julio Down by the Schoolyard,” in which Andrew Dost proved he could play the flugelhorn, then an acoustic version of “The Gambler.”  Then, near the end of the show, “We Are Young” began and everyone from concert goers, vendors, and staff began to sing in unison:  “Tonight/We are young/So let’s set the world on fire/We can burn brighter than the sun.” And that, ladies and gentlemen, was a sight to see. They followed up “We Are Young” with “Some Nights,” then finished it all off with a a cover of the Rolling Stones, “You Can’t Always Get What You Want.”  There is nowhere else I would have rather been than at That Tent, seeing fun. perform. It was an amazing way to finish off an even better Bonnaroo.