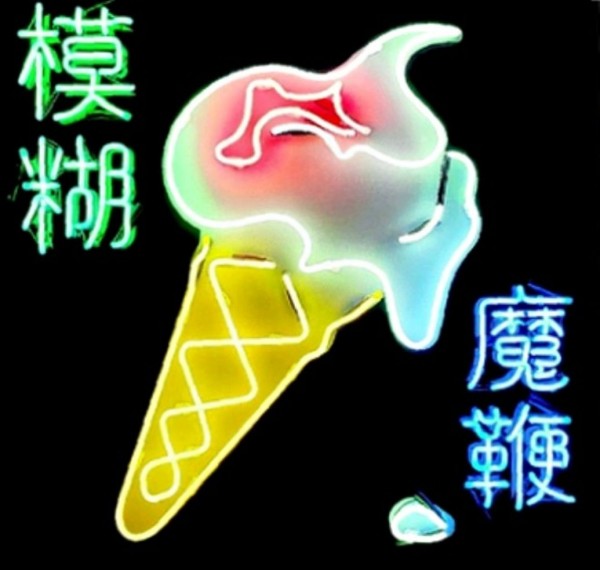 I personally do not know much about British rock band Blur, aside from its main singer Damon Albarn, who created the internationally beloved virtual band Gorillaz. Like many people my age, I grew up adoring Gorillaz, not only for its animated characteristics but also for the mix mash of sounds that borrowed from hip-hop, reggae, and pop. Because of Gorillaz, I also followed up with Albarn’s impressive comeback last year with his debut solo album Everyday Robots. Unfortunately, I missed out on Blur, Albarn’s very first project, until now of course.

On February of this year, Blur announced the exciting news of the release of their first album in over twelve years. The Magic Whip is a collection of thirteen songs that showcase an Oriental flair and an atmospheric lovely feel. Judging from the artwork itself, a neon-lit ice cream cone with the Chinese characters “Magic Whip,” Blur has taken inspiration from their 2013 reunion tour in Asia. There are songs such as “New World Tower,” “My Terracotta Heart,” and “Pyongyang” whose titles clearly give away the Asian influence. But discovering this album, one comes across messages through the lyrics, like those that address characteristics of new metropolitan Asian cities, such as the movement of technology, population, and challenges of modernization.

I can’t speak about similarities between The Magic Whip and Blur’s previous works, but I am very drawn to the album’s two drastically different ends. One half of the album is mellow and dark and ruled by repetitive claps and military-like beats, like in “My Terracotta Heart” and “There are too Many of Us”. The other half contrasts starkly; it has upbeat swings and a chirpy pop melody, like in the album’s opening song “Lonesome Street.” I find all the songs to be creatively different.

I am really glad I encountered Blur’s new album, for it made me want to dig out some of their older work and to appreciate the comebacks of old bands and artists. I sense that with The Magic Whip Blur definitely expanded their creativity by experimenting new sounds and expressing contemporary issues, but also keeping their good old British punk edge.

Key Tracks: “Ong Ong,” “My Terracotta Heart,” “There Are Too Many of Us”

Listen to “My Terracotta Heart”:

I’m Ellen Chen and I’m currently a sophomore majoring in marketing and finance. The pillars of my life are food, fashion, and friends. Music happens to be another that doesn’t start with an f. When it comes to music, I’m down for anything, from electronic remixes to rock n roll.

View all posts by Ellen Chen →