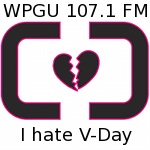 Obviously as you’re reading this you’re listening to WPGU 107.1’s I Hate Valentine’s Day programming (obviously).  But maybe it’s the day after Valentine’s Day and you still hate it and want to remember why, or you needed some quick songs for your iPod to commemorate this terrible day.  Here is a playlist the music features staff put together for you to enjoy.  Or perhaps use to hate this date.

Who needs a boyfriend when you can have one of these? “Brechtian Punk Cabaret” duo Amanda Palmer along with her drummer Brian Viglione released this track on their debut self-titled album, The Dresden Dolls back in 2003. Palmer’s reckless piano and vocal style Is perfect for February 14th. After all, a “Coin-Operated Boy” doesn’t expect you to be his valentine! -Madeline Rehayem

I don’t think there is anything more cutting than an angry Bob Dylan song—I mean, it’s Bob Dylan, he only speaks the truth. He wails, “You’re an idiot, babe, it’s a wonder that you still know how to breathe.” Off his album “Blood on the Tracks” this track, originally recorded to be around 8 minutes long, was not written in reference to Sara Dylan, Bob’s wife at the time. He stated in interviews about the album that, “The songs are my parents talking.” Nevertheless, I think it is an appropriate song for Valentines Day. Or, rather, Anti-Valentines Day. -Lise Graham

“I Am Trying To Break Your Heart” – Wilco

I Am Trying To Break Your Heart

Even though someone like Jeff Tweedy might have an enchanting voice, if anyone ever sings a song like this to you, you should probably find a new date, quick. -Joe Winner

“There She Goes Again” – The Velvet Underground

There She Goes Again

On this track Lou Reed nails the lack of control we can have in a relationship.  The singer teases the listener, informing us that there’s nothing we can do to keep her.  She’s going to go “bye bye bye!” again. -David Christians

It’s that time of year again. The love drunk couples are waltzing around town, blinded by Hallmark’s illusion. What they don’t realize is that when a commercial holiday isn’t in order during the other 364 days of the year, they’re on strict lock down. So don’t let this day get you down. John Mayer reassures you that it’s okay to be perfectly lonely, have no obligations and truly be liberated. So go out and enjoy the freedom that is single-life! -Jeremy Van

Love Is A Losing Game

Amy, Amy, Amy. The title speaks for itself, but the late Winehouse seems shockingly wise in this track, pointing out that no love will last and you’ll always get hurt. Happy Valentine’s Day! -Elena Davis