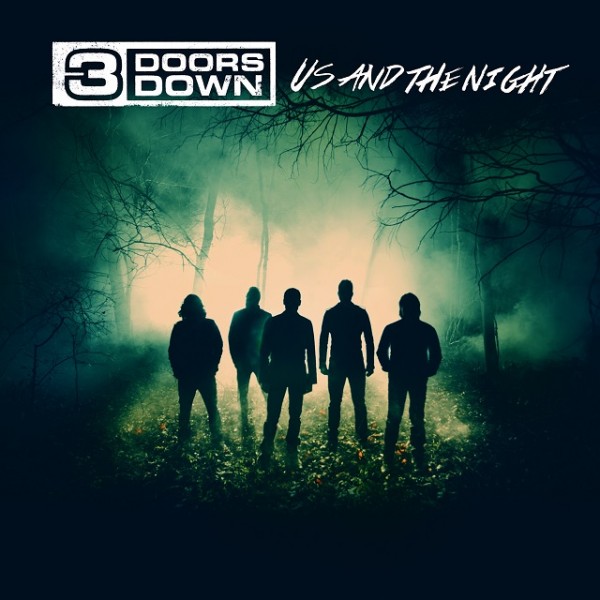 Three Doors Down will always have a special place in our hearts for bringing us the unforgettable rock hit “Kryptonite” (2002). Almost fifteen years later, very little has changed since then. As expected, the four albums to follow up the release of their highly successful Away from the Sun (2002) achieved minimal recognition. In their latest release, Us and the Night, I was surprised to find out that this was their sixth release and that not much has changed since I had last heard them. Three Doors Down’s latest album is a solid effort to say the least but it reminds us that their constant struggle to come out of the shadow of their early success still very much exists.

The opener “The Broken” is a bit expected and seems like another one of those songs that attempts to be super radio friendly to appeal to a wider audience. It may easily be my least favorite simply because it’s very disjointed from the vibe of the other songs on the album. Immediately after this pop-rock song opener, 3 Doors Down attempts to channel their inner hardcore rock side with songs like “In the Dark” and “Still Alive.” Although I very much appreciate the slick guitar riffs and extreme cowbell action going on I cannot help but feel like most of these songs have passed right by me since the first time through. However, there are very successful in creating pretty damn impressive guitar solos that are extremely blunt and filled with intense raw emotions.

When they decide to take it down a notch with songs like “Believe it” and “Inside of Me” they really bring us back to the classic 3 Doors Down one liners that are truly memorable. There is sense of nostalgia that comes from listening to this album. Surely, 3 Doors Down has not aged very much since their early days but the surplus of cliché lyrics are sometimes enjoyable enough to put a smile on your face. A personal favorite of mines is “Living in Your Hell” since it is the ultimate break up song that is always an essential to any good alternative rock album. As the title suggests, it’s bitter at its core and reminds of all the raw emotions from a past relationship that did not work out. Over the abrasive but captivating energy of the drums front man Brad Arnold croons, “You promised me your heaven but I am living in your hell.” This is definitely one of the few songs on the album that leaves a much more lasting impression.

This release is a solid effort, overall, as 3 Doors Down attempts to remain true to the same aesthetic they have had since their earlier releases. With time they will perhaps develop further, in order to create an album with more substance and memorable moments. As of now Us and the Night is an album that can easily fade away into the background. It’s an album that will grow on you if listen to it a dozen more times but overall it fails to make a lasting impression.

Key Tracks: “Still Alive,” “Living in Your Hell,” “Fell From the Moon”