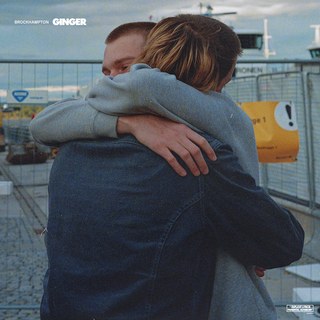 Like most people, BROCKHAMPTON has been on my radar ever since their “SATURATION” series which was released over the course of a summer in 2017. I loved the zany lyrics/production paired with super melodic, catchy hooks. The chemistry between the members was a key part of what made those albums work. The way different members would trade verses or switch up flows on each track was really fun to listen to and, in my opinion, it’s the big draw that made BROCKHAMPTON worth listening to. On their next record, “iridescence”, the group traded the more off-the-wall, weird production for something a lot more bombastic and cluttered. They also traded some of the wacky bars for more sung bridges and hooks that often took on a much darker, anxious feeling. Each new musical iteration of the BROCKHAMPTON saga has brought on a slightly different sound so far, and I didn’t expect anything less from this new album, “GINGER”.

Sonically I would put “GINGER” somewhere in between “iridescence” and the “SATURATION” series. It’s got some fun, wonky posse cuts as well as some more angsty, melodic alt-R&B songs. The first two tracks “NO HALO” and “SUGAR” definitely fall into the latter category. For me, these were easily the two weakest tracks in the tracklist. The super clean acoustic-R&B tune has already been done by countless other artists (Khalid and Post Malone) and has generally been met with much better results. Maybe I’ve just heard one too many sugary hooks over gentle guitar strums for my own good, it just seems to me like BROCKHAMPTON is doing very little to expand on a type of song that has been dominating popular music for the last year. However, the tracks do at least contain a little bit more emotion than I’m used to from tracks like those.

Thankfully things dramatically improve on the rest of the tracklist. From the fantastic interlude “HEAVEN BELONGS TO YOU” courtesy of UK-rapper slowthai, to the mesmerizing title track, I had a pretty decent time listening to this project. “ST. PERCY” is a standout to me as it highlights what I like most about BROCKHAMPTON, their off-kilter beats and wild group chemistry. “IF YOU PRAY RIGHT” is the track that follows and keeps that same energy. Rubbery low-end and bouncing horns create the perfect backdrop for some fun bars like, “My attention to detail is in scale with classic impressionists.” courtesy of Dom McLennon.

The vocal performances from all the members are pretty good overall. I’d say the standout performer this album was Matt Champion as his output varied from melodic, sung verses to rapid-fire bars. He definitely showed the most versatility he ever has on this album. This isn’t to say any of the other members had bad verses but of all the group members Matt Champion was the most consistently.

Thematically the album seemed a little religious. Not to imply that this is a gospel album by any means but there were a lot of references to Christianity, Buddhism, religious figures, praying, and God made at various points in the tracklist. I think a lot of this record is about rising out a dark place and searching for some kind of closure via a higher power. The song “DEARLY DEPARTED” also touches on the some BROCKHAMPTON members’ relationship with ex-member Ameer Vahn. Dom McLennon has a particularly emotional verse where he raps about feeling betrayed and even deceived by his former bandmate.

This album wasn’t a huge departure from the sound that BROCKHAMPTON has come to expect. There are definitely a few differences sonically but nothing that would really surprise the community. If you’re a BROCKHAMPTON fan I think you’ll probably enjoy this album, and I think people that are new to the group will probably like it too due to some of the more pop-influenced tracks on the record. Overall this isn’t the most earth-shattering BROCKHAMPTON album I’ve ever heard but it’s definitely not a bad listen, especially for longtime fans of the group.