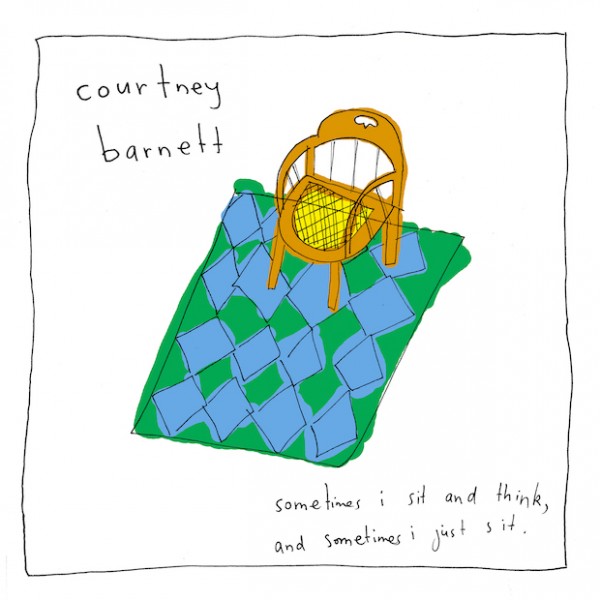 From the moment you first hear the infectious banter of Courtney Barnett in her music, you will instantly fall in love for the fact the Aussie songstress can hold her own in clever use of wordplay. It is certain that Barnett is definitely an artist to watch for as she continues to make great strides in her career. Any fans of the Double EP A Sea of Split Peas will be pleasantly surprised by her debut album, Sometimes I Sit and Think and Sometimes I Just Sit. Not only does album depart from the heavy folk influence from her previous EP, but it comprises of memorable anecdotes of her everyday struggles.

In just a short amount of time, her talent has already been widely publicized by being showcased in festivals like this year’s SXSW. Her single off this debut album, “Pedestrian at Best”, has a certain edge to it, which definitely sets the tone for the rest of her album. Barnett articulates her sentiments freely even if at times they are borderline offensive, but as many of her supporters know, this is what makes her music so highly amusing and entertaining. Similarly to her most beloved tracks off her previous EP, like “Avant Gardner” and “Canned Tomatoes,” is the feel-good song “Depreston.” While it may pay tribute to her previous work, it also stands alone as the song with the most originality in her debut album.

Unlike many upcoming artists, Barnett spends less time trying to replicate the same kind of music that gave her favorable success and spends more time writing songs about her personal experiences. A majority of the tracks off this album are quite catchy and more upbeat than songs off her EP, proving to everyone that this time around Barnett knew exactly what she was doing. Tracks like “Small Poppies” and “Kim’s Caravan” are more obscure in terms of their place in her folk-pop album. Both tracks capture the beauty in her vocal abilities, however, the song “Kim’s Caravan” is more of a profoundly personal track with moving lyrics such as, “Take what you want from me.” Songs like “A Illustration of Loneliness (Sleepless In New York)” exemplify the power of her song writing as she spends half the song talking about the ceiling, all while capturing a valuable experience of missing someone intensely. The stirring guitar riffs of her music make her experience all more exciting and relatable than it really is. Yet, the most exciting track off the album is the opening song, “Elevator Operator”, which revolves completely around seeing a business man committing suicide, can be quite successful as a single if she ever chooses to do so. It is one of those songs you can have on a constant replay without ever losing any of its substance.

You get a strong sense of who Courtney Barnett is through her debut album as she reveals a great deal of insecurities that we can all relate to along with making music she can be proud of. Perhaps in her coming music, she can skip out on some of the obscurity found in some of the less memorable tracks off this album. Courtney Barnett proclaims, “Put me on a pedestal and I’ll only disappoint you”, but she can be far from worried about disappointing anybody with the work she has put forth in this debut album.

Key Tracks: “Nobody Really Cares If You Don’t Go To The Party”, “Elevator Operator”, “Pedestrian At Best”, “An Illustration Of Loneliness (Sleepless In New York)”